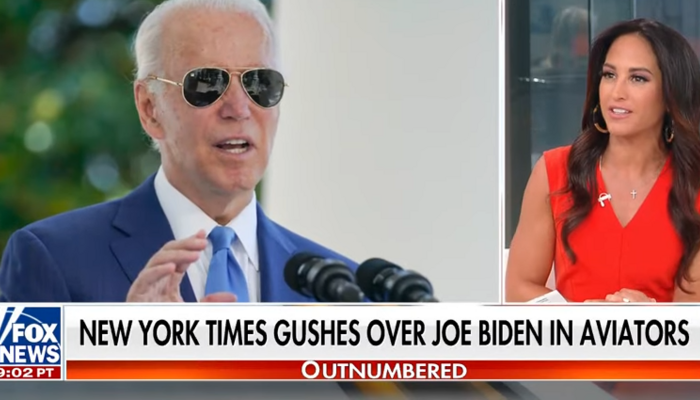 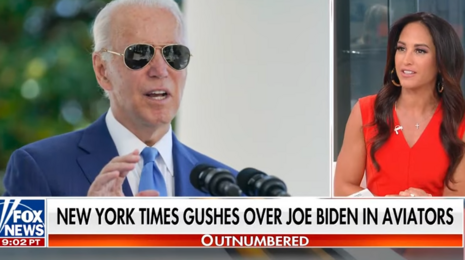 The New York Times is making the most out of President Biden’s legislative “victories” to give him a political makeover and to make “Aviator Joe” a thing, even pushing the shades-wearing Biden as a political Tom Cruise. Call it Mission Impossible.

Fashion reporter Vanessa Friedman’s embarrassing tribute to Biden’s Ray-Ban sunglasses will appear in Thursday’s print edition: “The Return of Aviator Joe — President Biden is back after Covid, vacation and legislative victories, and so are his shades.”

Aviator Joe is back — just in time to take his quasi-victory lap.

Forget the glowing eyes of Dark Brandon. As President Joseph R. Biden Jr. arrives back in Washington, D.C., to enter the White House to sign the Inflation Reduction Act of 2022, it is his Ray-Ban 3025s — the dark, wire-rimmed, teardrop-shaped sunglasses he has made his signature — that once again seem the emblem of the man.

It’s the attitude as much as anything (even taking into account the glare of summer). He’s not just wearing sunglasses now. He’s wearing shades.

“You know Joe Biden is having a good day when he wears his aviators,” said Lis Smith, the author of the recent book “Any Given Tuesday” and the political strategist who helped craft Pete Buttigieg’s presidential campaign….

Then the fateful Cruise comparison was made.

That the re-emergence happened in the wake of another great aviator re-emergence and success story, that of Tom Cruise in “Top Gun: Maverick,” is probably not a coincidence….

More recently, another pair of Ray-Bans helped power “Top Gun: Maverick” to the top of the box office, defied conventional wisdom that said Covid and streaming had buried the summer blockbuster, and played an integral part in a story featuring an aging but even more effective hero. Someone all the better for all his experience. Wink, wink, nudge, nudge.

Meanwhile, reporter Aishvarya Kavi covered one of Biden’s many vacation jaunts in Wednesday’s paper: “‘Go Get Your Bathing Suits!’: Biden Takes a Vacation as Washington Beckons.” She called the “Inflation Reduction Act “one of his landmark achievements as president,” and ended with the thoughts of a Biden-besotten local, Caitlin Tuten-Rhodes:

But it’s still a thrill, she said, to know she might bump into Mr. Biden around town.

The current Biden parade launched on August 13’s front page, after Biden’s misnamed “Inflation Reduction Act” bill passed the U.S. House of Representatives: “House Delivers Biden Victory, and a Bet on America’s Future.” Michael Shear and Zolan Kanno-Youngs got ahead of themselves in their eagerness to boost Biden.

He promised a new social safety net. He pledged to develop a robust plan to fight global warming. He vowed to reduce the gap between rich and poor by making the wealthy “pay their fair share.”

And along the way, Joseph R. Biden Jr. often said as he battled Donald J. Trump for the White House in 2020, he would prove that democracy still works in America.

With final House passage of the Inflation Reduction Act on Friday, President Biden is poised to deliver the latest in a series of legislative victories that will ripple across the country for decades — lowering the cost of prescription drugs, extending subsidies to help people pay for health insurance, reducing the deficit and investing more than $370 billion into climate and energy programs.

How are the reporters so sure the plan will in fact “reduce the deficit”?

Maher Labels Democrats As ‘The Party Of No Common Sense’
CNN Misleads, Ignores Poll Supporting Busing Illegals to Blue Cities
McDonald’s owners group says company rejected request to delay big changes to franchise system
The Left’s ESG Movement Is Coming After All Americans. Here’s How It Can Be Stopped
NY Times vs. Science: Critic Hess TRIGGERED by Realistic Images of the Fetus