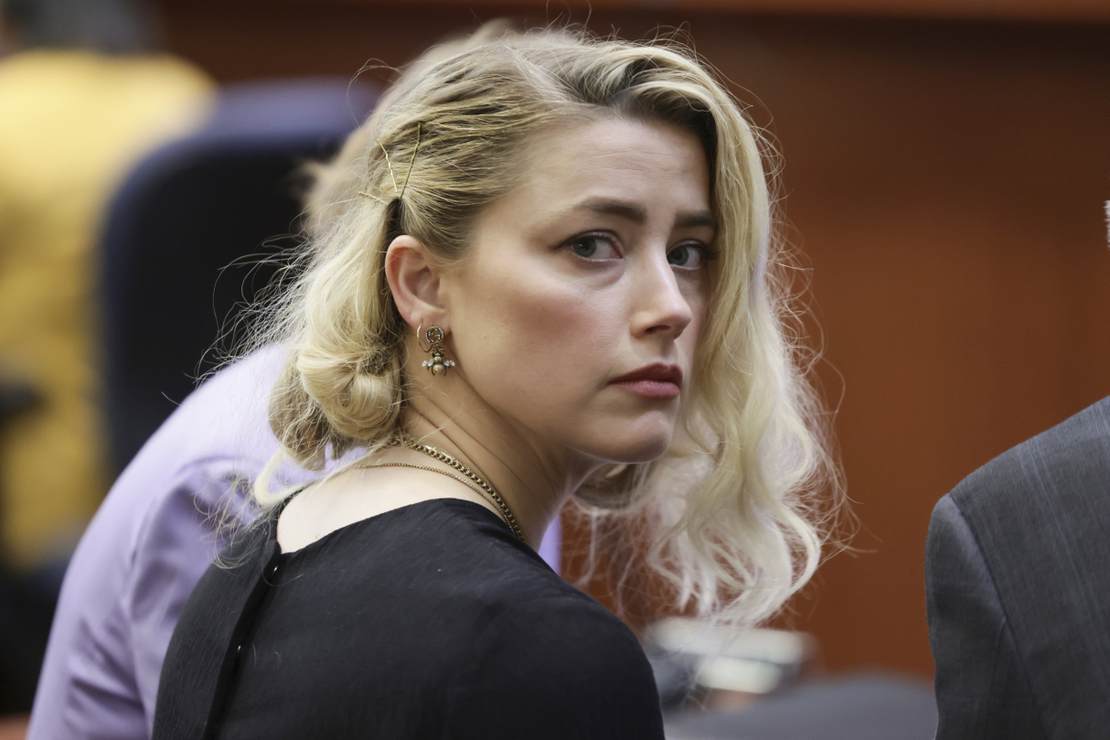 NBC News refuses to give up the ghost of Amber Heard “the victim” in spite of a guilty verdict in the defamation case brought by Johnny Depp against his ex-wife. Big Media continues to try to gaslight the public into believing that the real victim in this case is Heard. NBC “tech and culture reporter” Kat Tenbarge is leading the effort on Heard’s behalf by printing ridiculous articles like “New documents trigger fresh online battle between Amber Heard and Johnny Depp fans,” in which she insinuated that unsealed documents reveal abuse by Depp (they don’t) and that everyone owes Heard an apology (you don’t).

In a perfect illustration of how fake news operates, Tenbarge, who used to be a social influencer reporter at Insider before getting promoted to NBC, even admits in her reporting that she did no investigation into the unsealed documents she claims show positive things for Heard.

NBC News has not independently reviewed the documents, but it has seen purported copies circulating online, including pages posted by YouTuber Andrea Burkhart on her website.

Gee! Shouldn’t NBC News review documents before reporting on them and claiming they show something they don’t? That might be something NBC should do if it wanted to be taken seriously as a news organization and not a gossip rag. How on earth did this get past her editor?

Tenbarge then used a tweet from an unverified account with 160 followers to try to spread the appearance of support for Heard. It is a mystery why such a small Twitter account would get the notice of NBC News. The tweet only had 1000 or so likes but it sparked an entire article by Tenbarge, almost as if someone who worked at a PR firm got #AmberHeardDeservesAnApology trending by coordinating a tweet campaign and then fed the results to NBC. NBC would jump on the chance to try to salvage their bad coverage of the Depp trial when they, along with every other Big Media outlet, attempted to gaslight the public into believing Heard was winning.

#AmberHeardDeservesAnApology from the entire world that mocked, ridiculed her and derided her for entertainment purposes. Apologize to Amber Heard. Start believing victims when they speak up. They are not lying, they are not conspiring, they are not crazy, they are survivors.

Tenbarge never mentioned in this article what exactly anyone owed Heard an apology for, simply hinting that the revealed documents showed something negative for Depp and creating the appearance that Heard was gaining support on social media.

After publishing the documents, which contain more than 6,000 pages, on her website, Burkhart and her followers ignited more scrutiny of Depp from people online.

That’s all the details we get from Tenbarge, who admits she never read any of the documents. She then repeated old news about Depp losing the trial in the UK. There’s nothing new here, just an excuse to claim that Heard is gaining support on social media because a handful of no-name accounts with very few followers say so. This article is pure fabrication and PR for Heard. But Tenbarge wasn’t done shilling.

On August 12, Tenbarge printed another article which she called an expose on a YouTuber who went by the name The Real Laura B. Following Taylor Lorenz’s example, Tenbarge doxed her for daring to have opinions on the Depp trial that are not complimentary to Heard or her PR team led by the “walking MeToo case” David Shane.

“A pro-Johnny Depp YouTuber was spreading lies and conspiracy theories about an employee of the public relations firm that works with Amber Heard, a law firm said in a cease-and-desist letter,” wrote Tenbarge.

According to a source known to PJ Media close to this situation, NBC News had a copy of that cease-and-desist letter before the recipient did. Tenbarge made sure to print Laura’s real last name, location, and profession, which was previously not public information.

Laura Bockoven, who was once a real estate salesperson in Massachusetts, according to public real estate license records, regularly defends Depp on Twitter and YouTube.

Shane Communications hired lawyers to send the cease-and-desist letter to Bockoven. Her offense was asking if a Shane Communications employee was using an anonymous Twitter account for PR efforts for Heard. An anonymous account using the name “Kamilla” with 20k followers was regularly posting tweets supporting Heard that went viral more often than an account with that number of followers would usually get. It didn’t look organic. It looked like a manufactured campaign. Not only that, but major news outlets were using the account to inspire pro-Heard articles like Tenbarge’s. And other accounts with far fewer followers were also getting huge engagement numbers for pro-Heard sentiments. People noticed.

There’s not a chance in hell this is organic!!!
80 followers and a viral tweet with 78.7 K likes ⚠️#Kamillaexposed #KamillaGate pic.twitter.com/2ql4juOWFP

Bockoven called it out and noticed that the avatar on the “Kamilla” account, a stylized cartoon image of a black woman with thick naturally curly hair, looked a lot like one of Shane’s employees, Crisanta White. White also had similar artwork on her Pinterest page that other YouTubers discovered.

Just curious. This you Kamilla? 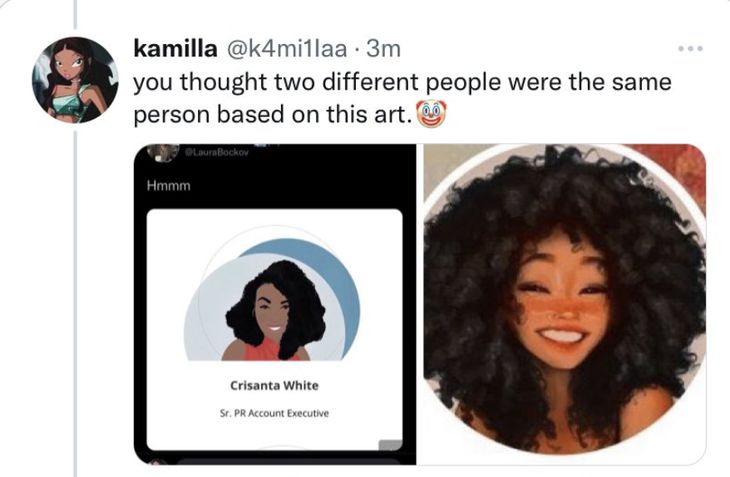 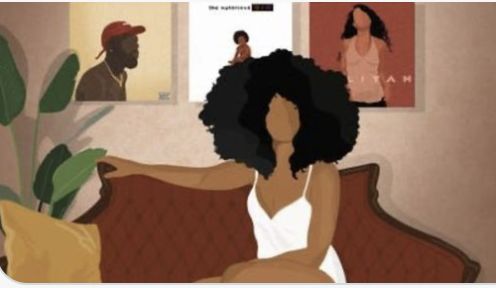 White was hired as the diversity and inclusion expert for Shane Communications. Her LinkedIn claims she’s also a social media expert. White now denies that in a statement responding to Bockoven’s suggestion that she could be behind “Kamilla’s” account. “I have never done ‘grassroots social media management,” she wrote. But according to LinkedIn, she is a “social media specialist.” How the two are different is not clear.

The outrage and overreaction by Shane Communications to the mere suggestion that his firm may be engaging in well-known PR tactics of manipulating social media is bizarre. They fired off a cease-and-desist letter to Bockoven promising to sue her if she did not remove the tweet asking if White is “Kamilla.” But worse, Tenbarge, working for NBC, doxed Bockoven while not revealing who was behind the “Kamilla” account.

Tenbarge never even mentioned whether or not she confirmed if Kamilla is associated with Shane Communications, but printed Shane’s denials as fact. Meanwhile, Bockoven has been doxed, her family targeted in their workplaces, and in White’s statement, it is made clear that Shane Communications knows Bockoven has a daughter and how old she is in what looks like an attempt to scare her. That Umbrella Guy who was named in the Depp trial by Heard’s legal team multiple times as “Depp’s biggest Twitters,” and who has also been harassed by Heard supporters for months, including having child services called on him alleging non-existent child abuse, pointed out the scummy tactic in the video below.

Shane is no stranger to intimidation tactics to protect his reputation from interested journalists who notice all the smoke billowing around him. He tried and failed to intimidate PJ Media with a threat of a lawsuit, which I wrote about here. He also has sent similar threats to the NY Post and others who have reported on the allegations around him and his behavior. He has been called “litigious” and a “walking #MeToo case” in major publications by people who have had experience with him.

PJ Media reached out multiple times to Tenbarge to inquire if she did confirm who runs the “Kamilla” account but she did not respond. We also attempted to contact NBC’s media contact and Tenbarge’s editor and neither responded to our questions about how this story was vetted. According to Tenbarge’s own article, she spoke with White by phone but only communicated with “Kamilla” through Twitter DMs.

“Kamilla, who does not disclose her full name to protect her privacy, said in tweets and via direct message that she is not White,” wrote Tenbarge. That’s not verification. And why does “Kamilla” get to protect her privacy but Bockoven does not? Who at NBC authorized the doxing of Bockoven? Tenbarge could answer those questions, but she has chosen not to. Instead, she spends her time impugning YouTubers and independent media. “There has been a push from Depp’s base to legitimize the ‘internet journalists’ who support Depp. But these online creators don’t follow journalistic standards or ethics, like reaching out to people for comment before you post allegations against them,” she wrote. Of course, Taylor Lorenz was caught doing just that and she works for the Washington Post!

Tenbarge thinks she has “journalistic standards” but she didn’t even verify if “Kamilla” worked for Shane Communications and she doxed someone while calling her a liar without finding out if Shane was telling the truth! What kind of standards are those?

Everyone knows that public relations firms work closely with their friends in Big Media to repair the reputations of their clients. It is no secret they often manipulate social media, pay for trending topics, purchase followers, or pay to get certain tweets lots of views. It is not defamatory to suggest Shane Communications could be engaging in this perfectly legal (although distasteful) behavior. Defamation is accusing someone of a crime that harms them financially, like Heard accusing Depp of beating her which led to the loss of two franchise films for Depp. It is not defamation to ask if a PR firm is engaging in social media manipulation. PR firms doing what PR firms do might be ethically questionable but it isn’t a crime.

Shane has given everyone a lot of reasons to dislike him and his company for the tactics he uses to protect his client who is an admitted husband batterer. Whether or not “Kamilla” is White or someone else in Shane’s firm or someone else entirely unconnected to Shane really doesn’t matter.

The curtain has been pulled back and people know how the game is played. PR firms and media need to get smarter about how they try to manipulate the public because the public is on to them.

If I conducted myself like the mainstream media, I’d be banned form every platform online.

They doxx, use personal information to attack people’s families, and then hide behind special treatments given press outlets.

The public sees them, though.