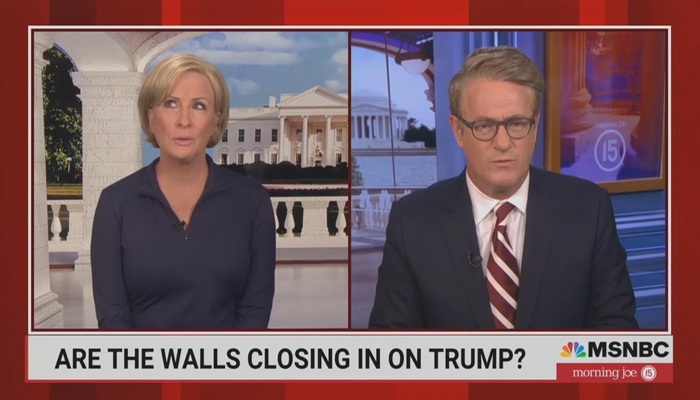 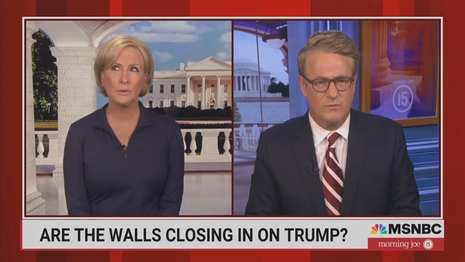 As we described it, Tuesday’s Morning Joe was a “Gloat-a-Thon” over the Mar-a-Lago search. But even the show’s unbridled schadenfreude on Tueday paled in comparison to Morning Joe‘s absolute ecstasy today over Donald Trump’s potential legal woes.

Mika and George Conway both joined the long chorus line of liberals declaring that the “walls are closing in” on Trump.

The ultimate euphoria came at the end of the first half-hour, as MSNBC legal analyst Charles Coleman, commenting on how the the Biden DoJ has turned the tables on Trump, quoted an “old saying:”

“It’s no fun when the rabbit has the gun.”

Mika immediately burst into prolonged, uproarious, laughter, and twice repeated the phrase. Scarborough was so enthralled with the saying that he said he would “write it down.”

Now imagine if a conservative commentator invoked the notion of a Republican president’s law enforcement agencies having “the gun” on a Democrat president.  Cue the shrieks of liberal outrage!

And consider that a favorite liberal talking point nowadays is how Trump and others have and continue to incite violence. So who’s inciting violence now, as they laugh uncontrollably at the prospect of Donald Trump having a gun trained on him?

Other low-lights from the segment:

The gloat-a-thon on Morning Joe was sponsored by GlaxoSmithKline, maker of Shingrix, Ring, and Wegmans.

MIKA BRZEZINSKI: The former president once claimed that innocent people don’t plead the Fifth. So what does that say about him!–after he invoked the Fifth Amendment hundreds of times with the State of New York yesterday?

Yeesh! Walls are closing in.

Does he still think it’s disgraceful?

MIKA: Does he think it’s something you only do if you’re guilty?

MIKA: And does he still think it’s something that the mob does?

SCARBOROUGH: 400 times! Is he mobbed up?

MIKA: We’ll get into that.

SCARBOROUGH: Is he telling us? Is this confession?

GEORGE CONWAY: Well, I do agree. This is, I think the walls are closing in on him.

SCARBOROUGH: — Fascists. I think you call fascists fascists, and if people are, if fascists are going out making threats, I think what you do, you know, you go after them with the law.

MIKA: There’s that, but there’s also —

Well, you know, there are legal channels for that, too.

MIKA: Newsweek matched this reporting of where this all came from on the inside to senior government officials who told the search was largely based on from an informant —

SCARBOROUGH: — an informant on the inside of Mar-a-Lago!

MIKA: — what documents Trump was hiding, and where they were located.

MIKA: Trump world is now reportedly trying to figure out who flipped. According to Rolling Stone, Donald Trump is worried he may have a rat, or multiple rats, in his midst. He’s wondering if his phones or tapped. Or even if his buddies could be wearing a wire. And Barbara, I would think that’s a very good thing to be concerned about.

MCQUADE: Yeah, absolutely. If this is an ongoing investigation, as it appears to be, then it would be appropriate to continue to collect evidence. And so, the ways that those are done are through listening devices, surveillance techniques, confidential informants, consensual monitoring, and other things.

CHARLES COLEMAN: Well, you know, Joe, as the old saying goes, it’s no fun when the rabbit has the gun. [Mika bursts into extended laughter.]

And I think that’s where Donald Trump finds himself [Mika continues to laugh]. He is essentially getting a very different view of how the legal system works. You know, this is someone who —

SCARBOROUGH: By the way, Charles, I grew up in the South —

MIKA: That is fantastic! It’s no fun when the rabbit —

SCARBOROUGH: — and I heard from my grandmom and my mom and my aunt, I heard just about every hearing, every saying —

MIKA: It’s no fun when the rabbit has the gun!

SCARBOROUGH: I never heard that one. So I’m going to write that down right now while you continue. Go ahead.

Whoopi, Cuomo Suggest White People Don’t ‘Pay Attention’ to Black People
NY Times vs. Science: Critic Hess TRIGGERED by Realistic Images of the Fetus
Having It Both Ways on the Pandemic
One Year Ago Today, the Greatest Chant Was Captured on Live TV – And “LET’S GO BRANDON!” Was Born (VIDEO)
9/11 responder and 25-year veteran of FDNY EMS fatally stabbed 19 times just 6 months before retirement; suspect arrested after standoff