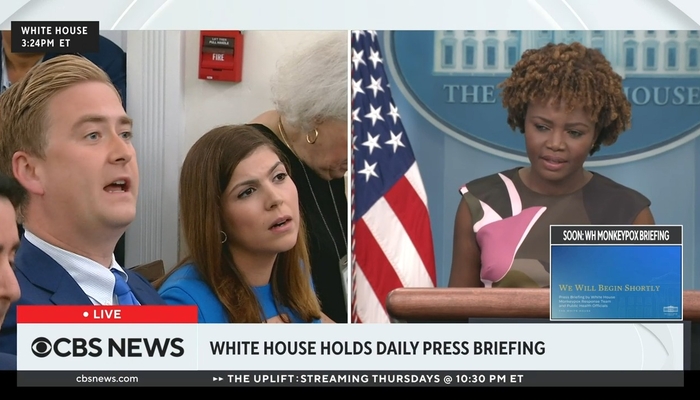 With President Biden having spent Monday in flood-stricken Kentucky and departing Wednesday for vacation in South Carolina, Tuesday marked perhaps the week’s only White House briefing, so reporters got in their takes about the FBI raid of former President Trump’s Florida home. Of course, Fox’s Peter Doocy did battle with Press Secretary Karine Jean-Pierre on the raid and whether the White House would do anything to pushback arguments that they’ve weaponized law enforcement against opponents.

Doocy led off with a round-about way of asking about the raid: “Do you consider Donald Trump to be a political rival of President Biden?” When Jean-Pierre insisted she wouldn’t “speak to that from here,” he countered with the fact that Biden “talks about Trump all time.” Incredibly, she disputed it: “Ehhh, I don’t talk about Trump all the time.”

Despite a series of audible scoffs, Doocy noted a few recent examples, starting with one of the administrations catchphrases for the GOP: “Ultra-MAGA, you guys were criticizing his handling of COVID last week. You’ve mentioned his January 6 response a couple days ago. So, can you say, based on all that–I didn’t say anything about Mar-a-Lago.”

Doocy tried again, but Jean-Pierre ducked, leaving the Fox reporter with another approach in citing Biden’s own declaration against him that he’d “be very fortunate if I had [Trump] running against me” in 2024. Jean-Pierre tried to interjected that she wasn’t “going to comment on” the raid despite Doocy’s insistence that “it’s just a quote from the President”

He moved next to whether the White House would declare before the world that they haven’t turned the Justice Department and FBI on its political adversaries (click “expand”):

JEAN-PIERRE: First — first of all, we’re just not going to comment on the Department of Justice investigation.

JEAN-PIERRE: We are just not going to comment on that.

DOOCY: Is this White House weaponizing the Justice Department and the FBI against political opponents?

JEAN-PIERRE: The President has been very clear from before he was elected — very clear on this — hold on —

JEAN-PIERRE: — throughout his time in office.

DOOCY: — he’s President now. I heard the quote. We will be playing the quote tonight at six o’clock. Is this administration weaponizing the Justice Department the FBI against political opponents?

JEAN-PIERRE: And I’m telling you that we are not going to comment on a criminal investigation. The President has been very clear. I laid out what his thoughts were back on January 7th in 2021 about how we saw the Department of Justice and I’m just going to leave it there. We are not going to comment come from here from this White House on a criminal investigation that is currently happening.

Doocy closed on a somewhat humorous note as he wanted to know “[w]ho around here decided that Americans were crying out for more interaction from the IRS” and whether they thought it would “be popular when the 87,000 new employees hired by the IRS go around and start auditing people to pay for the Inflation Reduction Act.”

In a response certain to come back to bite her, Jean-Pierre insisted the new employees would only target “those earning over $400,000” a year.

Both before and after Doocy, the AP’s Zeke Miller, liberal partisan Mary Bruce of ABC, CBS News Radio’s Steven Portnoy, and AFP’s Sebastian Smith used their unsuccessful attempts with Jean-Pierre to question whether the raid could pose problems for the credibility of the DOJ and FBI (click “expand”):

MILLER: Is the White House at all concerned given the domestic political climate, but also the signal that it sends to the rest of the world that the Department of Justice carried out this sort of operation on a former President that it could even be — create the appearance of politically-motivated prosecution?

JEAN-PIERRE: So, first off — and you’ve heard us say this times at this podium, you’ve heard the President say this the Justice Department conducts investigations, independently. And we leave any law enforcement matters to them. It would not be appropriate for us to comment on any ongoing investigations. I can say that the President Biden has been unequivocal since the campaign. He believes in the rule of law, in the independence of Justice — of the Justice Department investigations — that those investigations should be free from political influence and he has held that commitment as President. I also want to remind you all of what he said on January 7th, 2021 when he then nominated Merrick Garland to be the attorney general and I quote: “We need to restore the honor, the integrity of the independence of the Department of Justice in this nation that has been so badly damaged. And so, many former leaders of that department in both parties have so testified and that — and stated that. I want to be clear to those that leave this department who you will serve. You won’t work for me. You are not the president or the vice president’s lawyer. Your loyalty is not to me. It’s to the law, the Constitution, the people of this nation, to guarantee justice.” So, I would refer you to the Department of Justice.

MILLER: And just lastly, does the White House or the President believe it would be helpful both domestically and the signal that it sends abroad for the department of justice to be more open about the reasons for that search warrant, the underlying evidence there?

BRUCE: And along this rate, I understand you’re underscoring the independence of the Justice Department, but just politically and in terms of the optics of this, you concerned about how it looks for the Justice Department to be investigating and raiding the home of former President, who may very well be the current President’s rival in 2024?

PORTNOY: Once more on this question of the general reaction to what has happened since yesterday. Does the President that the FBI’s legitimacy and decision-making in the way that it handled this is on the line.

SMITH: So, I’m not asking you to comment on the Justice Department side of this, obviously, because I know you’re out. But politically, is the President — who’s the country’s leader — is he confident that he has a plan to address the way that a lot of Americans — maybe even a very large number of Americans — are being told and may now believe that Donald Trump is being persecuted, that the Deep State’s coming after you, that the IRS and the FBI are corrupt. All this kind of stuff. This is really believed, apparently, by really a lot of people. He’s the leader of the whole country, as he often says. Does he have a handle on this?

Though she didn’t tie it to the raid (and instead suggested there’s “a lot of work” left), Real Clear Politics’s Philip Wegmann indirectly touched on credibility and divisions: “The President campaigned on binding up the wounds of the country and restoring norms and I’m wondering two years in if the President believes that he has made progress in restoring the American public’s faith in federal institutions?”

Today News Africa’s Simon Ateba did the opposite in terms of subtly, leaving even the inept Jean-Pierre in position to deflect: “[Y]ou said that the President believes in the rule of law. Does he believe in the rule of law when it comes to the former President or even his son?”

As for acts of liberal activism and cheerleading, CNN’s Kaitlan Collins sought insight into how Biden “plan[s] to use the string of wins that he’s had lately and that Democrats had lately to turn it to a sense of momentum, not just for his own low approval ratings, but also to help Democrats in the midterm elections.”

On the raid, Andrew Feinberg of the Independent wanted to know if the White House and relevant agencies were “preparing for possible violence” in retaliation.