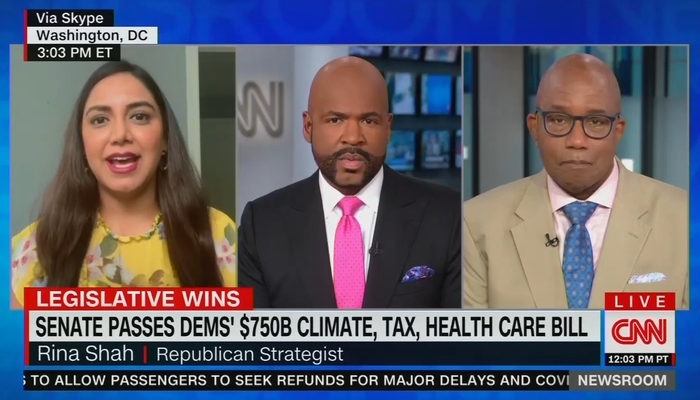 It’s one thing to have Democratic-sympathetic media figures cheering the passage of the so-called Inflation Reduction Act by the Senate, but it’s another thing entirely to try to trick your audience into thinking Republicans support the bill’s passage. But CNN tried just that on Monday afternoon’s CNN Newsroom, where Rina Shah was described as a “Republican strategist” but advised her supposed GOP colleagues to “just be silent” about the bill and let the Democrats take their victory lap.

Co-host Victor Blackwell discussed the bill with Shah alongside CNN political commentator and NY1 host Errol Louis, with Blackwell introducing her as “senior adviser to Republican Women for Progress.”

Blackwell began by asking Louis if he thought the bill would substantially impact on the outcome of the November midterms. Louis hedged his bets: “They’re going to have to really get out there and sell this about what’s going to happen in the future. That doesn’t always necessarily work when Americans are cranky, paying high bills, and not necessarily believing that this is going to work for them.”

When Shah — again, she was labeled by the chyron as a “Republican strategist” — was asked the same question, she largely agreed, but also attacked Republicans who would dare oppose the bill or warn of its potentially harmful effects on the economy:

Shah’s advice to Republicans taking a principled stand against a massive spending bill? Shut up and be grateful!

Shah heavily criticized the candidates, saying that, “I don’t mean to be an alarmist here, but these kinds of candidates signal the death of a democracy as we know it.”

The “Republican strategist” then offered some political advice to Democrats:

A brief look into Rina Shah’s other media will help clear things up. As noted before, she is the chief adviser of Republican Women for Progress, whose website states, “If the Party of Lincoln is to continue to exist, we must ditch antiquated social ideals and separatism, develop a space for dialogue, and work towards creating constructive policies instead of pushing political agendas.”

Aside from being a “Big Tent” advocate looking to break one of the legs of the “Three-Legged Stool,” Shah is also not shy about expressing her views on social media:

Unsurprisingly, they are completely at odds with the vast majority of Republican voters and politicians.

And this is who CNN has on air to promote the “Republican” point of view? Who do they think they’re fooling?

VICTOR BLACKWELL: Let’s discuss further with CNN political commentator Errol Louis, he’s political anchor for Spectrum News and a columnist for New York magazine, and strategist Rina Shah is senior adviser to Republican Women for Progress. Good to have you both back.

Errol, let me start with you. Uh, that list of accomplishments that was just up on the screen, do you think that changes significantly the landscape for Democrats heading into the midterms?

ERROL LOUIS: It certainly gives them a lot of ammunition and a lot of energy to go out on the campaign trail. Now, will it sell? That’s the real question. There are a lot of — uh, Democrats I think that are already dispirited. They don’t like the way the polls are looking. They understand, frankly, Victor, that — you know, there’s a difference between getting a legislative win — uh, here in August, and somebody seeing it play — uh, play out in their lives.

You know, I mean a lot of those energy credits are going to be for if you put in new heat pumps or solar panels on your house, you can deduct 30 percent of the cost of that next year. Is that going to really get people excited in the next 90 days, which is what really matters for congressional Democrats? Not necessarily.

BLACKWELL: Yeah, the Inf — uh, the Inflation Reduction Act as it’s called, Rina — uh, won’t reduce inflation today or in September. What do you think the impact will be on the midterms?

RINA SHAH: Well number one, the Congressional Budget Office has told us it’s not going to drive up the deficit, and that’s something conservatives have long cared about and messaged on. Look, I think the reality is this, Republicans are going to say one thing but they know in the back of their minds there’s another. And that this was a jobs bill in many ways.

If it’s messaged correctly by people like Senator Manchin from my home state of West Virginia, he can get that message through to his constituency and say this is going to give you options for your future, for your kids to not have to go and work in coal, for example. I think that it gives hope.

And look, is it a perfect bill? Nothing on Capitol Hill is. But is it a starting place? Absolutely. The downside to this is the rhetoric that the Republicans are going to employ from now on. My, how the mighty have fallen, Victor. Look at how leader McConnell’s talking about this. Look at how Senate Republicans are talking about this. They’re employing misinformation. They’re taking on a very, very ugly veneer, and talking about this bill in a way that frankly doesn’t quite make sense to me. They should just be silent, I think, and Democrats seize the day. Hop in there and talk about how this is going to change the lives of young Americans and old Americans. Every single American across the country can benefit from this bill.

BLACKWELL: The most recent — uh, bill passed by the Senate again as Jessica Dean says now has to go to the House. Uh, Errol, that was — uh, passed on just Democratic votes.

FRANK LUNTZ [on CNN’s New Day, 08/08/22]: And the problem is, they communicate a partisan victory rather than a bipartisan success. That they’re communicating the difference, the tribes, the arguments, rather than the unity that a majority of Americans still want, and that affects not just the House races and Senate races, but it affects our entire mood.

BLACKWELL: What do you think of that?

LOUIS: Frank Luntz is a very smart guy. He put his finger on the problem that has been dividing America for so long. First of all, there’s a whole bunch of independents who are not necessarily partisan. Uh, but that’s not how you win elections, how you win elections is you get your base excited — uh, and then you see how much more you need, then you adjust to your base, and then you pull in maybe a couple of independents, but you don’t necessarily have to go across the aisle for bipartisan victories at the polls. Bipartisan victory on Capitol Hill is very different from a bipartisan victory — uh, in the streets.

And so — uh, that’s the real problem with the system, it’s really what makes it feel broken because everybody goes to their base. That’s what you’re supposed to do. That’s how you win elections. And we’re asking people to do exactly that in the next 90 days. It’s going to really cut against this broad — bipartisan in some respects — uh, or I should say broadly popular set of proposals that they just passed in the senate.

BLACKWELL: Rina, let’s talk about some of these Republicans who are now the nominees of their party for the Senate. Uh, Rick Scott, head of the National Republican Senatorial Committee, his job is to get Republicans elected so they can — uh, get the majority — uh, was on — uh, CBS this weekend. Margaret Brennan asked him about the standard that he set that voters should elect candidates who they would hire. Here’s part of the conversation.

MARGARET BRENNAN [on CBS Sunday Morning, 08/07/22]: In Georgia, Herschel Walker, Republican Senate candidate — uh, has lied about the number of children he has, about his business dealings, his ex-wife said he held a gun to her head and said I’m going to blow your effing brains out. In Arizona, the candidate Blake Masters called the Unabomber an underrated thinker. Would you hire these people to work for you?

BLACKWELL: That ain’t a yes. Um, and their other candidate, J.D. Vance has said some questionable things in Ohio. So what do these candidates mean looking ahead to — uh, the potential that the Republicans can win — um, the majority in the Senate?

SHAH: I don’t mean to be an alarmist here, but these kinds of candidates signal the death of a democracy as we know it. And I’m not trying to be — you know, I can’t believe I’m saying that. I made my career in this Republican Party. I have never seen the clown cars that keep coming out of some of these states of candidates that frankly don’t deserve a second look, much less to be the nominee.

Here’s the thing about these candidates, is they have been allowed to get this far. We have allowed our politics to become sensationalized. We’ve allowed our electorate to dumb itself down. We’ve said it’s okay to not be engaged. How can you change a system if you don’t understand how it works? That is what local Republican parties are counting on. They’re counting on their voters to not understand the system and just fall in line. We don’t see it change locally or federally.

So guess what the playbook has to be. How people hit back is with real facts, is with a plan of action, and unless Democrats — unfortunately it’s on their shoulders — unless Democrats hit back with the real plan and says don’t worry about this right now, which means this meaning the economy, the prices on the shelf. People will want to punish Democrats for that, but they need to thread the needle here is what I’m getting at.

They need to do the delicate dance of preserving our democracy, and proving that these candidates are too crazy and unqualified to take office, while also showing that they have a plan to get our country back to normal, and get people keeping more money in their pocket books. It’s a delicate dance, as I said.

LOUIS: Oh yeah, absolutely. You know, you have to ask yourself, is there a baseline? Is there something that somebody can say or do that simply disqualifies them? And that has been one of the more unfortunate changes in politics over the last five years, is that — you know, there’s nothing that can disqualify you, and — and for Senator Scott to not even say — you know, the idea that like, yes, some of this is disqualifying — you know, to hedge it in some way and say look, I personally wouldn’t hire these guys. But — uh, it’s not my choice. It’s the choice of the voters, which is the reality of it. But we’re in for some very tough times.

I would say, though, I’m a little bit more optimistic about this. People generally, overall, over time, make the right choice. A lot of — a lot of — uh, a lot of bad characters, a lot of bad candidates come forward, but they ultimately don’t last.

Christian Pastor John MacArthur issues scathing rebuke of California Gov. Gavin Newsom for running pro-choice billboards, urges the leader to turn to Christ
Joe Biden’s Life Story Is a Lie
A 5th Century Roman’s Guide to Happiness in a World Full of Pain, Loss, and Injustice
Disney reaches deal with activist investor Third Point, will add former Meta executive to its board
Harris: Government Should Use Race to Determine Who Gets Disaster Relief