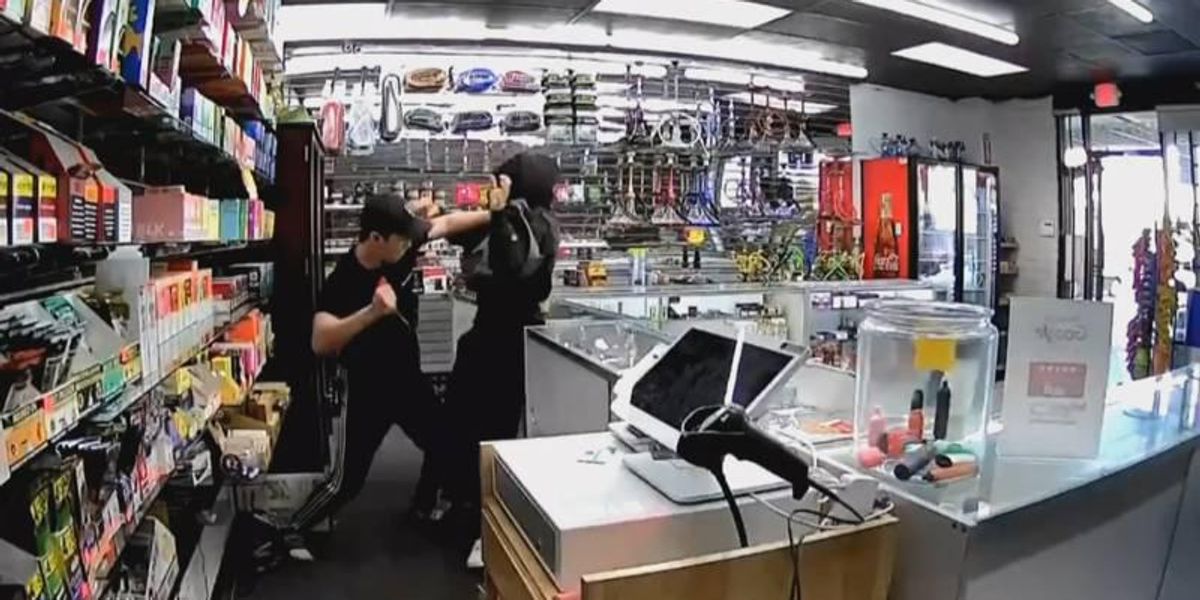 Video captured the harrowing moment when the owner of a Las Vegas smoke shop stabbed a would-be robber.

Johnny Nguyen was working at the Smokestrom Smoke Shop in the middle of the day on Wednesday when two individuals wearing ski masks walked into his store. In the surveillance camera video, Nguyen can be heard asking them, “Why are you guys wearing masks like that?”

Nguyen then said, “Can you guys just leave?”

One of the youngsters takes a tip jar. Nguyen told them that they can take the jar, but asks them to leave the coins.

Suddenly, one of the individuals jumps over the counter. That’s when Nguyen began stabbing the would-be thief.

Nguyen stabbed the would-be robber seven times with a knife.

The other person instantly ran out of the smoke shop.

As he is being stabbed, the would-be thief yells, “I’m dead! I’m dead!”

He then falls to the floor. Nguyen drags the would-be robber near the front door of the smoke shop.

Immediately after he had stabbed the would-be thief, Nguyen called the police.

Nguyen told FOX5, “The whole time I was a little bit nervous because obviously I was getting robbed.”

“I was really scared for my life because they were wearing baggy clothes… one of them came in with a bag as if he had a firearm,” the smoke shop owner said.

“I was in a fight or flight mode… a lot of adrenaline going through my body,” Nguyen added.

“I honestly don’t recall what I was thinking,” Nguyen told KSNV. “I assumed they had guns on them.”

Nguyen revealed that he plans to purchase a gun for the store in the event that his store is robbed again.

“I don’t know who they’re friends with, maybe they want to come back and do something else, so I just must stay vigilant,” Nguyen said.

Nguyen told KLAS-TV, “I don’t think he planned on getting stabbed that day obviously, but if you try robbing a store you are taking a risk. This is a small business obviously.”

Las Vegas Metropolitan Police said they had arrested two juveniles involved in the attempted robbery of the Smokestrom Smoke Shop in Las Vegas.

The would-be robber was taken to a local hospital after the foiled robbery attempt. Authorities did not reveal the health of the would-be thief who was stabbed.

No charges have been filed against Nguyen at the time of publication.