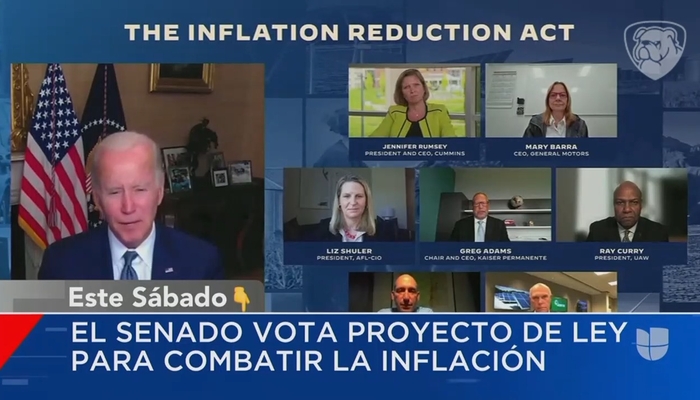 Univision news went into full PAC mode to promote Joe Manchin´s so-called “Inflation Reduction Act”, dedicating 35-seconds to an advertorial heralding “the project that according to experts would help (us) deal with the inflation we are experiencing”, according to anchor/regime propagandist Borja Voces.

The report not only openly lobbied for the bill, but also avoided any reference to how the democrats got a hesitant senator Kyrsten Sinema (D-AZ) on board: by siding with giving tax relief to hedge funds managers and equity executives in order to hire 87,000 IRS agents to audit the middle and working class.

Watch how Voces uses the midday news A-Block to shill for Democrats:

BORJA VOCES: And on Saturday the Senate will vote on the controversial “Inflation Reduction Act”, a key package on President Biden’s agenda. Yesterday, and after several days of negotiations, Arizona Senator Krysten(sic) Sinema, gave her support to the project that according to experts will help deal with the inflation we are experiencing. In addition, it would reduce the fiscal deficit and the price of certain medicines, impose taxes on large corporations, and allocate millions to fight climate change. If greenlit, it will go to the House for approval.

After admitting that the bill is a controversial one (but failing to say why), Voces defined it as “a key package on President Biden´s agenda”. The way Voces pitches it, the bill would magically “reduce the fiscal deficit, and the price of certain medicines, impose taxes on large corporations and allocate millions to fight climate change”.

Unfortunately, the 33-second report fails to tell Univision’s viewers that multiple nonpartisan organizations found that the bill would increase taxes across all brackets, but particularly among the poor, working, and middle classes.

Furthermore, Univision failed to disclose that in order to win Ms. Sinema’s support, Democratic leaders agreed to drop a $14 billion tax increase on wealthy hedge fund managers and Wall Street executives. Since many of these firms are now in the real estate rental business, it is fair to say that Democrats have given a tax break to landlords at a time when rents are skyrocketing. And there is no doubt that this is how Univision would’ve reported this tax break had it been poised to pass a Republican Congress.

Univision proves that they are only interested in standing opposite to power so long as that power is Republican. Otherwise, they are regime media.

Morning Joe Hilarity: Back to ‘Are the Walls Closing In On Trump?’
Salman Rushdie in surgery after he was stabbed in neck and abdomen, police say
Why So-Called Inflation Reduction Act Doesn’t Reduce Inflation
What is She Wearing? Jill Biden Goes Shopping with Hunter’s Wife – Dons a Tacky Blue Dress
‘Stand up for children’s innocence’: Texas comptroller investigating June drag event involving children