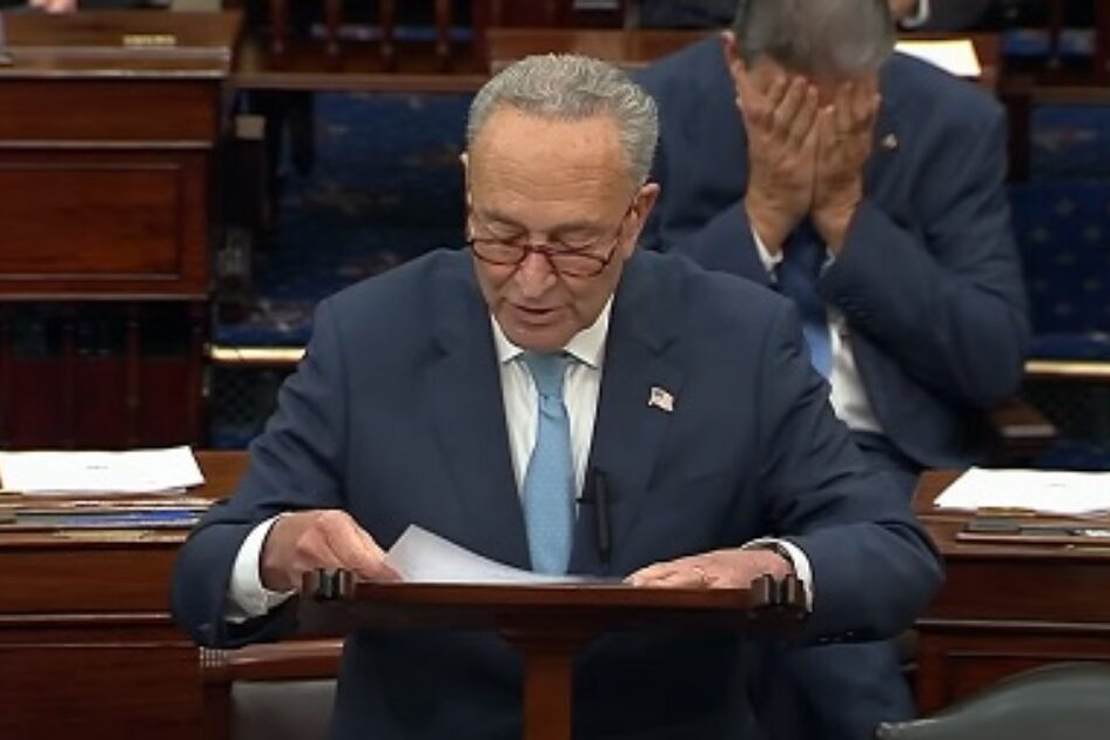 Senate Majority Leader Chuck Schumer and Joe Biden are lying when they claim that the so-called Inflation Reduction Act will not raise taxes on anyone who makes less than $400,000. They’re also lying about the bill reducing inflation, not harming America’s competitiveness, and growing the economy.

But the “Big Fib” is the promise that only rich people’s taxes are being raised. Democrats have been promising to bring down the deficit by raising taxes on the rich for ten years, and it never works because they just turn around and increase spending even more.

But nestled in the Schumer-Manchin bill is a real-world calculation that business tax increases ultimately increase taxes on workers, and not making that clear is dishonest.

An analysis by the National Association of Manufacturers says the tax in 2023 alone will reduce real GDP by $68.5 billion and cut labor income by $17.1 billion. One well-known economic truth is that corporations don’t really pay taxes. They are essentially tax collectors, as the corporate tax rate ultimately falls on some combination of workers, shareholders and customers. Raise the corporate tax rate, and you’re cutting wages and salaries for workers.

Any analysis of a tax increase on businesses has to take into account future earnings by workers. How much less will workers get paid because of the tax increase on their employer?

No surprise, that’s exactly what the Joint Committee on Taxation found in its analysis of the Schumer-Manchin bill’s distributional impact. The JCT finds that average tax rates will increase for nearly every income category in 2023 under the bill.

Taxes will rise by $16.7 billion in 2023 on Americans earning less than $200,000 a year. Taxpayers earning between $200,000 and $500,000 will pay $14.1 billion more. This gives the lie to Democratic claims that no one earning under $400,000 will pay more taxes under the bill, a promise Mr. Biden also made in his campaign. The reality is that the Schumer-Manchin bill is a tax increase on nearly every American.

A news release from the Senate Finance Committee says that by 2031, “new energy credits and subsidies would have people earning less than $400,000 pay as much as two-thirds of the additional tax revenue collected that year.”

“Americans are already experiencing the consequences of Democrats’ reckless economic policies. The mislabeled ‘Inflation Reduction Act’ will do nothing to bring the economy out of stagnation and recession, but it will raise billions of dollars in taxes on Americans making less than $400,000,” said Sen. Mike Crapo, an Idaho Republican who sits on the Senate Finance Committee as a ranking member, and who requested the analysis.

“The more this bill is analyzed by impartial experts, the more we can see Democrats are trying to sell the American people a bill of goods,” Crapo added.

A Democratic spokesperson claims that Republicans are fudging the figures. Ashley Schapitl said the Joint Committee on Taxation analysis isn’t complete because “it doesn’t include the benefits to middle-class families of making health insurance premiums and prescription drugs more affordable. The same goes for clean energy incentives for families,” Politico reported.

Few families will take advantage of “clean energy subsidies,” nor is there any guarantee that drugs are going to get cheaper. Also, the supposed benefits for families in the bill like lowering inflation are simply not going to materialize — at least not for seven or eight years.

To be fair, taxes on those making less than $400,000 a year will go up marginally. But “almost no tax increase” is still a tax increase. It would be nice if politicians would try to tell the truth once in a while for our benefit.

After years of rapid growth, the housing market is showing clear signs of slowing down
Back-to-School Blues: Droves of Americans Ditching Public School
The New York Times Struggles With Russian and Ukrainian Strawmen
Some consumers are cutting back on restaurant spending, but CEOs say not all chains are affected
The Biden Administration Brings On the Authoritarianism