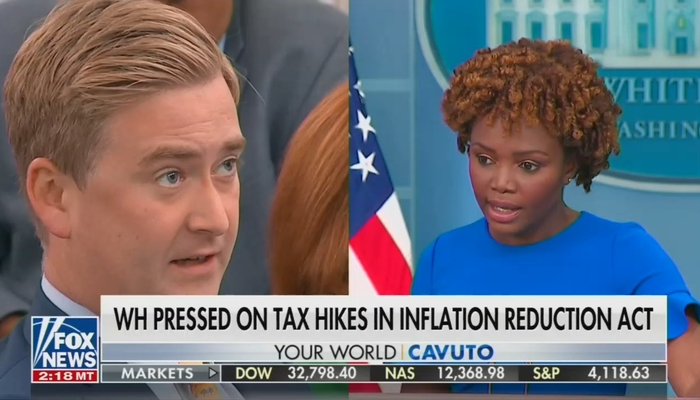 On Monday afternoon, reporters saw John Kirby emerge yet again for the White House press briefing as chaperone for the incoherent and stammering Press Secretary Karine Jean-Pierre and while there were some tough questions for Kirby on House Speaker Nancy Pelosi’s (D-CA) rumored trip to Taiwan, Fox’s Peter Doocy made Jean-Pierre crumble on the so-called Inflation Reduction Act that, according to some estimates, raise taxes on low and middle-class Americans.

As he often does, Doocy began with a basic question: “Is President Biden thinking about pulling his support for the Inflation Reduction Act?”

A confused Jean-Pierre said “no,” so Doocy explained why he asked what he did: “Because he promised it wasn’t gonna raise taxes on anybody making less than $400,000 a year, but the Joint Committee on Taxation says that is not true.”

Jean-Pierre maintained “that is incorrect,” so Doocy pressed once more: “So, the Joint Committee on Taxation, which you guys heralded as an effective body when you were selling the infrastructure package, is not to be trusted here?”

Like many of the Biden administration’s spending proposals, Jean-Pierre insisted the JCT was wrong because their analysis was “incomplete” and “omit[ted] the actual benefits that Americans would receive” on energy and prescription drugs.

After citing two far-left economists to back her up, Doocy cited another bleak analysis of the proposal conjured up by Senators Joe Manchin (D-WV) and Chuck Schumer (D-NY).

This time, however, it hit closer to home as it involved one of two schools where the President had established a Biden Center during his post-vice presidency. But once again, Jean-Pierre wanted nothing to do with them (click “expand”):

DOOCY: And – so, Penn-Wharton, where the President used to – University of Pennsylvania, he used to be a professor there – Penn-Wharton Budget Model says this Inflation Reduction Act is actually going to increase inflation in 2024. Does the President worry about that?”

JEAN-PIERRE: So, we agree with Senator Manchin. You heard him a couple times yesterday — and disagree Penn-Wharton as a – as – as do a number of qualified experts, which I’m happy to read out. But I – you know, I do wanna say that it is quite ironic that congressional Republicans are complaining – or – are – have a false off – a false outrage on – on this Inflation Reduction Act that is actually going to do something and help the American people lower costs when, you know – when they have offered nothing to do that. What they have offered is to increase taxes on Americans making less than $100,000 a year and what they have introduced is actually sunsetting Medicare and sunsetting also Social Security after five years and that’s how they want to deal with — how to help the American people. We are talking doing the complete – absolute, complete opposite.

Doocy pivoted with the timing remaining to see why the White House hadn’t responded to a provocative threat from a Communist Chinese government official that they would shoot down Pelosi’s plan if she were to visit Taiwan.

Given her ineptitude, Jean-Pierre initially said she had “not seen those reports” before condemning it as “unnecessary” since “there’s no change in the One China policy.”

Taiwan dominated Kirby’s portion of the briefing. When CBS’s Nancy Cordes wanted to know “why was [Pelosi] being urged not to go” even though U.S. “policy hasn’t changed,” Kirby was caught flat-footed when he replied he didn’t know anyone had discouraged her from doing so. This left Cordes to point out that Biden had recently done just that and Kirby to counter that Pelosi “makes her own decisions.”

Staying on the President, NBC’s Kelly O’Donnell and The Washington Post’s Tyler Pager sought to defend Biden by lamenting that a Pelosi stop in a free county would cause, at minimum, a global headache (click “expand”):

PAGER: It seems like this trip obviously is sparking a little more anxiety inside this building and throughout the administration, and I understand you said that the President respects the independence, but given the national security risks at play and China’s escalating rhetoric, was there not a discussion inside this administration of whether or not you should take a more defensive stance, as MJ alluded to, if there are other countries at play here, we might see a different response, given what China has said it might do in response to a trip that puts all Americans at risk and their national security. Did the President feel that maybe this is a different case and that maybe he should be more involved, or the team should be more involved than they might get?

O’DONNELL: Because of the closeness between the speaker and the President, it does raise the question about is she sort of pressing a foreign policy that may in fact put the President in a bad position. Is that the sense of this White House?

Meanwhile, the indefatigable Philip Wegmann of Real Clear Politics left a usually calm Kirby irked and accusing him of “manufacturing” drama for wondering why Biden was “bother[ing] with this drama” over this possible Pelosi visit to Taiwan and instead “call the Chinese bluff or tell them to pound sand when they start bellyaching about the possibility of the trip, given as you pointed out, there’s no change in policy and there’s precedent for Pelosi to visit Taiwan.”