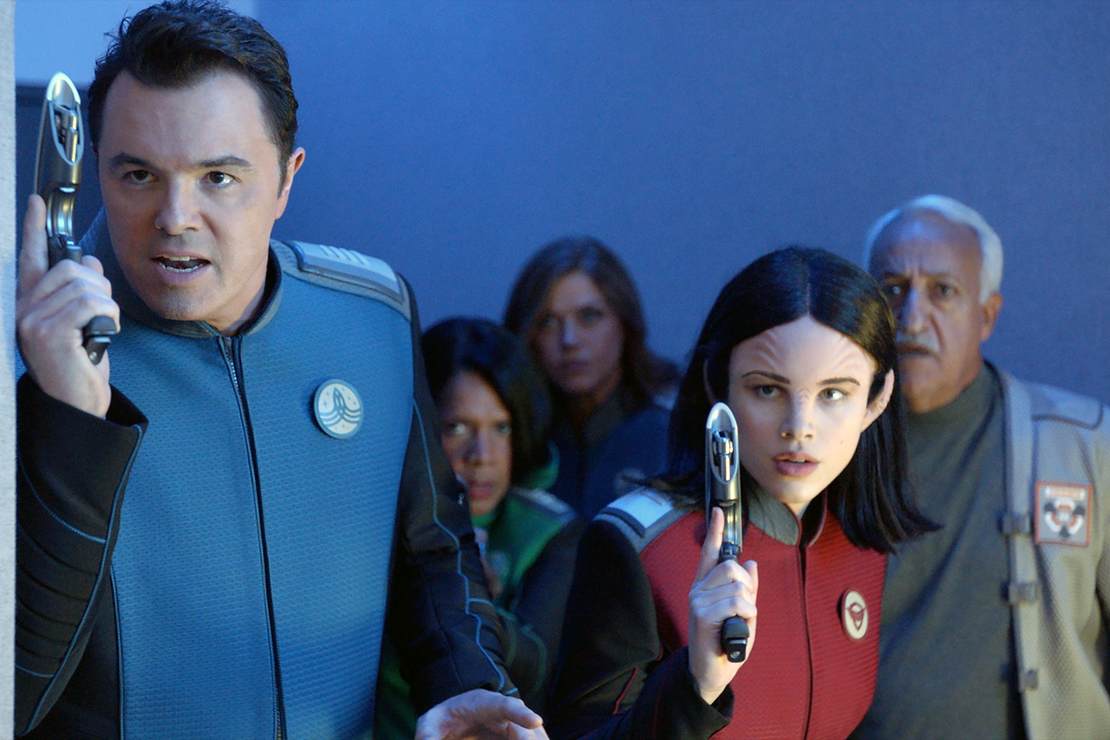 The sci-fi comedy The Orville returned to the small screen after a ridiculously long delay because of the COVID-19 pandemic. As a fan of the show, I’d been cautiously optimistic about the new season, now airing on Hulu, and I finally started making my way through the new season this month. And I was blown away by the fifth episode, which drove a stake through the heart of gender-transitioning children.

The Orville had touched on this issue twice before. The first time was in the third episode of the first season, in which Lt. Commander Bortus and his mate Klyden discover they have had a female child named Topa. Bortus and Klyden are Moclans — an all-male race — and the birth of a female child is an extremely rare occurrence that typically results in sex reassignment of the child to male. When Bortus asks the ship’s doctor, Claire Finn, to do the sex-reassignment procedure, she refuses. Bortus attempts to force her to do it by asking Captain Ed Mercer, played by Seth MacFarlane, to give her an order — which he won’t do. Bortus eventually has misgivings about the sex reassignment. Still, ultimately a Moclan tribunal decides the child’s fate: she must undergo sex reassignment, and the verdict is not portrayed as a happy ending.

The ramifications of this decision are addressed later in the second season when Bortus finds himself addicted to X-rated fantasies on the ship’s simulator. At one point, Bortus traces his detachment from his mate Klyden to the forced sex reassignment of their child.

But the show more bluntly addresses the issue of transitioning children in this season’s episode titled “A Tale of Two Topas.” In the episode, Topa, now several years older, unaware of being born female, is going through an identity crisis. After confiding in Commander Kelly Grayson about this, Grayson attempts to discuss this with Bortus and Klyden, but Klyden is furious and forbids Topa from working under Commander Grayson. But, seeing how unhappy Topa is, Grayson directs Topa to files on the ship’s computer that explain Topa’s origins. As a result, Topa decides to de-transition, which she ultimately does.

Now, I don’t doubt some would argue the episode isn’t “transphobic” at all, that the message is that people should be who they feel themselves to be. But that doesn’t hold up. Here’s why.

When Topa discovers the truth and confronts her parents, she tells them, “I may appear to be male… but what is inside me still exists. It is why I have felt the way I have for so long. My body has been screaming to me that I am someone else.”

Klyden later confronts Commander Grayson for leading Topa to the truth. During the confrontation, she tells him, “And no matter how much it hurts you to know it, underneath that manufactured exterior, Topa is still female.”

I couldn’t believe what I heard — could there be a more blatant endorsement of biological sex over “gender identity”? As she says, a “manufactured exterior” can’t change biological sex.

Later, Klyden abandons his family and tells Topa he wishes she was never born. Bortus, however, looks her in the eye and says, “Listen very closely to me. You are perfect.” A pivotal moment from an alien belonging to an all-male race that considers females to be “aberrations of nature” that require surgical correction.

To me, there’s no other way to interpret this episode as anything but a condemnation of gender transitioning children.

I’m amazed that it aired, and I applaud Seth MacFarlane for writing it.