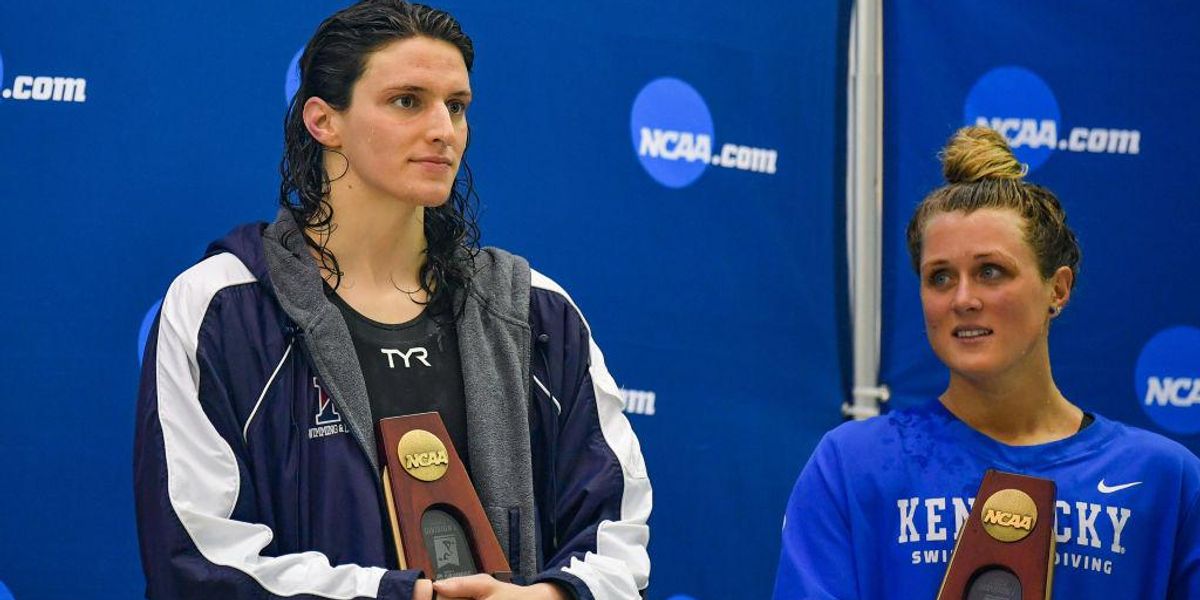 A former NCAA swimmer is speaking out about the “extreme discomfort” she encountered while she was forced to share a locker room with transgender athlete Lia Thomas from the University of Pennsylvania.

In March, Gaines competed against Lia Thomas – a biological male – in the 200 freestyle final at the NCAA Women’s Championships. Gaines tied Thomas for fifth place. However, the NCAA only had one fifth-place trophy. Gaines told the Daily Wire that Thomas was awarded the fifth-place trophy and Gaines was told that she would get her trophy in the mail. Gaines had to pose with a sixth-place trophy on the podium.

Gaines appeared on Wednesday’s episode of “Tucker Carlson Today” where she detailed her experience competing against a biological male who had transitioned.

“There’s extreme discomfort in the locker room, there’s kind of these grumbles,” Gaines explained. “Then we’re sitting there not even knowing who to talk to, who to complain to, because this kind of all happened behind the scenes and very discreetly.”

“[B]etter swimmers know if your better swimmers regardless of what school or what conference you’re at,” Gaines said. “You compete internationally together. Even if you’re not on the same collegiate team, you’ve probably been on teams together before.”

“All of a sudden, out of nowhere, there’s this article posted that says, ‘Lia Thomas, swimmer at UPenn, posts 1.41 200m freestyle,’ which is a very, very fast time,” the former University of Kentucky swimmer noted.

Gaines recalled, “I kind of just went about my training because I was like, this is a good thing maybe, but, turns out, two weeks before our national championships, the NCAA announced Lia will be competing with the females, and I was just like, ‘mind blown.'”

Gaines – who is one of the few NCCA athletes to publicly speak out against Thomas competing against women – described the atmosphere at the NCAA national championships as “edgy.”

“The environment is nothing like I’ve ever seen before,” Gaines revealed. “People didn’t really know what to say, who to say what to, how to feel. Obviously, I know how I felt and I knew how my teammates felt, but no one really wanted to talk about it.”

After Thomas captured a championship title in the first event, Gaines said the mood deteriorated.

“That next day we came back and the mood had shifted to where people were mad,” Gaines remembered. “There were tears, these poor ninth and seventeenth-place finishers who missed out on being named an all-American.”

Gaines slammed the NCAA for a “huge lack of accountability” in allowing a biological male to dominate female swimmers.

“I think people forget that women’s sports were a protected group. The category was made because the playing field was not level by any means when you have them competing against men,” Gaines expressed. “And so obviously it was created to ensure that fairness. And now that we are kind of completely flipping that, it devalues what it was created for.”

“Once you start infringing upon something that people have fought so hard to get and something that I know, personally, I have dedicated essentially my whole life to, I’m allowed to think that’s not okay and obviously not support that by any means,” she declared.

Before speaking about the controversy, Gaines consulted people in her inner circle.

“I talked to my athletic director, I talked to my parents, and I was like, ‘Are you all okay with this?’ And they all said, ‘Speak your heart, go for it,'” Gaines said.

Since speaking her mind, Gaines said she received “an influx of support all across the board.”

Gaines railed against her detractors, “You have your couple of negative comments, but it’s things calling me, like, ‘transphobic’ – which, if they say that, it just rolls right over my head because they’re not listening to the message.”

Earlier this month, UPenn nominated Thomas for the “Woman of the Year” award.

Gaines bashed the NCAA, “This is yet another slap in the face to women. First a female national title and now nominated for the pinnacle award in collegiate athletics. The NCAA has made this award worthless.”

This week, Thomas did not win the “Woman of the Year” award.

Anti-ESG Fund Rakes In Millions After Two Days On The Market
NewsBusters Podcast: A ‘Brutal Payback’ for the Trump Raid?
ABC Rediscovers Afghanistan Debacle, But Just Three Seconds to Biden
Due to lack of support in state legislature for 12-week abortion ban, Nebraska governor won’t call special session
Clothing subscriptions like Stitch Fix were once hot – but now might be the victims of ‘box fatigue’