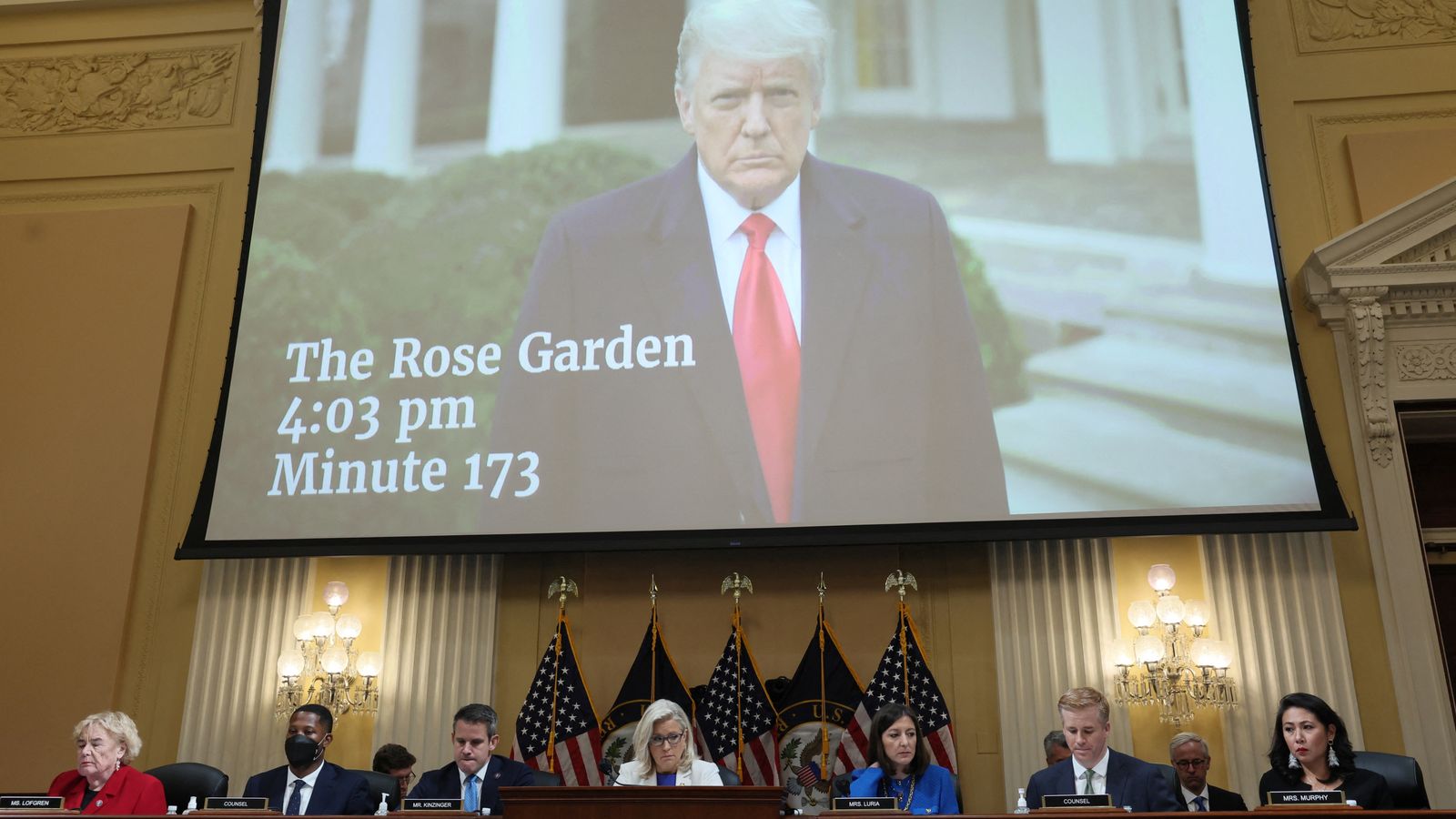 Donald Trump watched the Capitol riots on television in his dining room and failed to take “immediate action in a time of crisis”, an investigation has heard.

During the eighth hearing into the January 6 riots, the committee was told that the former president was aiming to stop or delay the congressional certification of Joe Biden’s election victory by not intervening.

The insurrection left five people dead, including a police officer, and more than 100 officers injured.

Congresswoman Liz Cheney said the only thing helping Mr Trump’s goal was the “angry armed mob” that he “sent to the Capitol”.

She added that Mr Trump chose not to answer pleas from Republican lawmakers to intervene and stop the violence for hours after the riots began.

“He refused to do what every American president must,” she said.

The committee was told that his daughter Ivanka Trump and former chief of staff Mark Meadows were among those urging him to issue a strong condemnation of the events.

His son, Donald Trump Junior, also made a plea for his dad to do something, telling Mr Meadows: “He has got to condemn this s*** ASAP.

“This one you go to the mattresses on. They will try to f*** his entire legacy on this if it gets worse.”

A timeframe of 187 minutes

Congressman Adam Kinzinger, one of two Republicans on the committee, said Mr Trump “resisted” tweeting out that protesters should be peaceful, with former White House deputy press secretary Sarah Matthews saying he only agreed to do so after his daughter suggested using the phrase.

Ms Matthews said his tweet “did not go far enough” and Mr Trump initially “did not want to include any sort of mention of peace” in it.

Analysis by US correspondent Sally Lockwood

This hearing was an astonishing insight into President Trump’s mindset in those hours of violence on Capitol Hill. What was he doing? That is the question at the heart of this committee’s investigation.

We now know he was watching the riot unfold on television from a dining room in the West Wing and refusing to call off the mob. Secret Service radio recordings sound panicked. One White House official described how staffers were fearing for their lives and calling family members to say goodbye.

The committee also revealed the large number of text messages being sent to his Chief of Staff Mark Meadows calling for him to stop the violence – from Fox News hosts, fellow Republicans, his son Donald Junior. Everyone close to him was appealing to him to do something. He was listening to no one.

It took him more than three hours before he agreed to tell the rioters to go home. Testimony from his former Deputy Press Secretary revealed it was his daughter Ivanka who finally got the former president to agree to some conciliatory language.

Then a day later, more evidence to show the president’s ongoing denial. Outtakes from a video message he recorded on 7 January were shown to the committee. He’s unwilling to say “the election is over”.

How likely is it that the evidence being presented in this committee could result in Donald Trump facing face criminal charges? It’s uncertain.

One key question is the question of intent.

Donald Trump never told this mob to break into the Capitol, he didn’t tell them to bring weapons. We do not have testimony to that effect. But there may be evidence when the hearings resume in September that link Donald Trump – or those in his circle – to a greater degree to the attack on the US Capitol.

The hearing aimed to show a “minute-by-minute” account of Mr Trump’s actions for the duration of the attack on the Capitol building – a timeframe of 187 minutes.

Beginning at 1.10pm, when Mr Trump finished his speech sparking the riots, it came to an end at 4.17pm when he released his now-infamous video on Twitter telling his supporters to “go home in peace”.

At 1.25pm, just 15 minutes after finishing his speech, Mr Trump went to the private dining room off the Oval Office, where he stayed until around 4pm.

Congresswoman Elaine Luria explained how he watched the chaos unfold on TV, saying he refused to do anything due to his “selfish desire to stay in power”.

She said witnesses told the committee that he sat at his “usual spot” at the head of the table facing the television on the wall, which was showing Fox News.

The hearing noted that, despite pleas for him to take action, Mr Trump instead sent a number of tweets, including one sharing a link to his speech and another referencing Vice President Mike Pence.

‘Pouring gasoline on the fire’

In the tweet, he said Mr Pence “didn’t have the courage to do what should have been done to protect” the US.

Footage played to the hearing showed a lot of anger was focused on Mr Pence, with protesters chanting for him to be hanged, calling him a traitor and saying he had “screwed” the American people.

Shortly after the tweet was sent, the committee said the incident escalated but Mr Trump continued to make calls to delay Mr Biden’s congressional certification as president.

Ms Matthews described the tweet as “pouring gasoline on the fire”.

In secret service radio traffic played to the committee, officers can be heard voicing their concerns about getting Mr Pence out of the building safely.

“Starting to kick in windows of the Capitol. VP being pulled. Decision in the next 2-3 minutes or… VP may be stuck in Capitol,” security logs read.

“If we lose any more time, we may lose the ability to leave,” one agent said. “If we are going to leave, we need to do it now.”

Sharing images of the White House call log, the committee said they show Mr Trump made no calls at all while the violence ensued.

It wasn’t until just after 4pm, more than three hours after the siege began, that Mr Trump recorded his video message from the White House’s Rose Garden.

The committee heard that a script had been written for him to read, but he decided to “go off the cuff” instead.

An outtake of his message, played to the hearing, showed Mr Trump wanted to claim that the majority of supporters were acting “peacefully” at the Capitol.

“I urge all my supporters to do exactly as 99.9% of them have already been doing – express their passions and opinions peacefully,” he was recorded as saying.

In another clip, showing an outtake of a message recorded the next day, the former president still refused to say the “election is over”, asking to just say that Congress had certified the result instead.

In his closing remarks, Mr Kinzinger described Mr Trump’s conduct as a “supreme violation of his oath of office” and a “dishonour” to America’s democracy.

“It is a stain on our history,” he added.

The hearing could be the last one this summer, with another round due to take place in September.

After years of rapid growth, the housing market is showing clear signs of slowing down
BIG TECH COLLUSION? Facebook Helped Liberal Axios Sell for $525M: Report
Is This Trump’s Moment to Officially Announce His 2024 Candidacy?
Oklahoma woman gets life in prison for convincing lover to murder her pastor husband who they had threesomes with
Eric Trump Says Safe Cracked Open By FBI Was Empty (VIDEO)