Florida Woman was arrested in the rain outside a Publix on Thursday, armed with a whip and a pitchfork. In the video at the link you can see her doing superhero poses with her weapons.

After Florida Woman was put in the back of the trooper’s car, she began to yell “God is great” several times. She also reportedly stabbed a man’s minivan with the pitchfork, causing damage, according to the store manager. [She stabbed a minivan??? -SG]

The trooper said the woman appeared to be “highly intoxicated on some sort of stimulant drug.” Slone reportedly told law enforcement “she felt no pain anymore and that God was in control.”

I saved the kicker for the very end: Florida Woman, dancing around in the rain with a pitchfork and whip, was reportedly trying to sell teddy bears.

That’s only the second time Florida Wo/Man has scored six points in a single caper, and just one shy of last week’s all-time record of seven points.

Welcome to the Spider-Man Multiverse 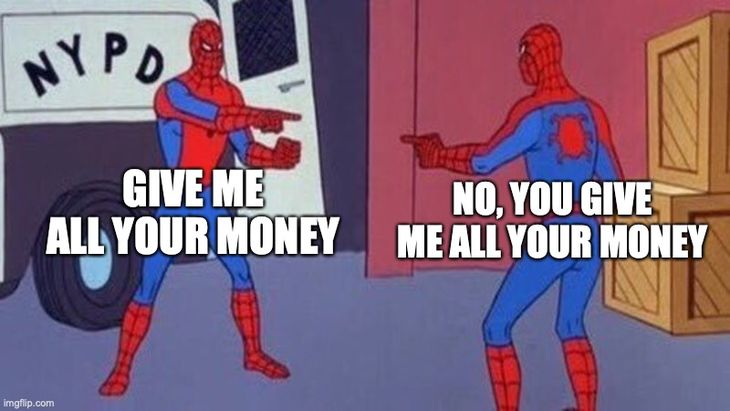 It’s weirder than you think.

Florida Man was dressed head to toe as the web-slinger when authorities said he robbed a woman near the intersection of Federal Highway and Dixianna Street Monday evening, a report from WSVN said.

The victim was at a laundromat when she noticed Payne wearing the Spider-Man costume, bright yellow shorts, and sneakers while riding his bicycle.

After posing for a picture with the woman, Florida Man allegedly hit her on the back of the head and robbed her of $45.

Somehow, police had no difficulty identifying their man.

It must be said: Florida Man doesn’t quite get this whole cosplay thing.

The Return of Florida Iguana Madness

Florida woman surprised by uninvited iguana in her toilet

The reptile was unable to find its way out the commode so Reynolds had to enlist Harold Rondon of Iguana Lifestyles, a wildlife removal service, to rescue the little fella.

Going out on a limb here and guessing that Florida might be the only state in the union with a service named Iguana Lifestyles.

Get Off My Lawn, Get Out of My Living Room

I’ve read this story twice and I’m still not completely sure what the order of events was. But I can say for sure that there was alcohol, fast driving, crashing into a house, a fistfight, and shots fired.

Not bad for a Wednesday.

Previously on Florida Man Friday: Smokey and the Lawnmower Bandit

Not All Heroes Wear Capes

Just watch the video already, and bring a hanky.

Beaten to the Punch

It’s a Brawl World After All: Two Families Slug It Out at Disney

It’s true: PJ’s own Kevin Downey, Jr. beat me to the punch on a Florida Man story.

I don’t mind coming in second, so long as I’m losing to someone with style — like Kevin:

The family feud raged for roughly two minutes as onlookers gave the dumbos room to rumble. The Rescuers soon showed up and broke up the donnybrook, though several of the pugilists tried to continue the melee. One scrapper was hospitalized with a cut to the face, and several others were left with bruises.

There are several videos of the fisticuffs that can be found online. I like this one the best. PRO-TIP: count the shoes left on the ground as the dust-up continues. How do people lose their shoes in a gang fight?

You may be thinking. “Who goes to Disney and fights? A LOT of people.

If you missed it on Thursday, click over to Kevin’s piece for all the delightfully lurid details.

Even though beaten, I had to include this one for the FMF count.

We have five scored stories with a total of 19 points for an average of 3.8 points per story.

That’s a solid week, Florida Man. Can’t wait to see what comes next.

I’m not sure why Food & Wine felt the need to cover this one, but what the hell, right?

According to the Colorado Springs Visitor Information Center, hiking the 13-mile Barr Trail to the summit of Pikes Peak can take anywhere from six to 10 hours, depending on “weather, the hikers’ fitness and technical ability as well as a variety of other variables.” It took Bob Salem almost seven days to get to the top of the 14,115-foot mountain, but his ascent definitely included some “other variables,” because he pushed a peanut with his nose all the way to the top.

You read that correctly: Salem made his way up the mountain on his hands and knees, and he wore an oversized spoon attached to a CPAP mask to help him nudge a peanut for the full length of the trail. According to a Facebook post from the City of Manitou Springs, Salem is the first person in the 21st Century (and the fourth person, period) to complete the unorthodox climb.

Longtime FMF readers knew this was coming because I previewed Colorado Man’s attempt in the June 17 edition:

I know what you’re thinking: “This is what happens when you legalize magic mushrooms.”

But no. Here’s a story from 1963, years before Denver legalized ‘shrooms or even pot: Meet The Man Who Pushed A Peanut Up Pikes Peak With His Nose.

I keep you abreast of nothing but the finest news.