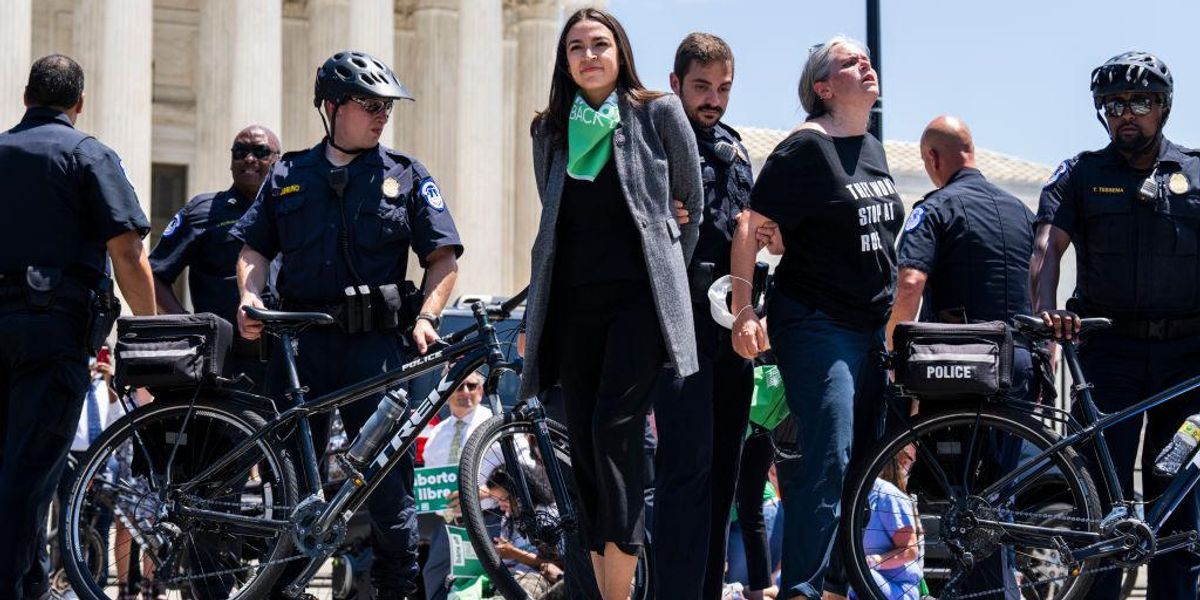 Several Democratic lawmakers were arrested at an abortion rights protest outside the Capitol on Tuesday as demonstrators railed against the Supreme Court’s decision to overturn Roe v. Wade.

According to police, the protest outside the U.S. Supreme Court building illegally obstructed traffic.

“It is against the law to block traffic, so officers are going to give our standard three warnings before they start making arrests,” police said.

Two minutes later the police said they started making arrests after warning the demonstrators to “get out of the street.”

u201cWe have already given our standard three warnings. nnSome of the demonstrators are refusing to get out of the street, so we are starting to make arrests.u201d

By 1:35 p.m. the protest was cleared. Capitol Police said a total of 34 arrests were made for crowding, obstructing, or incommoding, including 16 members of Congress.

Axios later reported that 17 lawmakers were arrested. They are:

Video posted on Twitter showed police officers escorting lawmakers away from the demonstration.

u201cMultiple members of Congress, including @AOC, being arrested by Capitol Police for blocking traffic outside the Supreme Court in abortion rights demonstration:u201d

As Ocasio-Cortez was taken away by police, she held her hands behind her back as if she was handcuffed, but she was not. Video shows her raising her fist in defiant salute to the other protesters.

u201c.@AOC has just been escorted by police away from the Supreme Court.u201d

Some of the Democrats issued statements after their arrest.

“There is no democracy if women do not have control over their own bodies and decisions about their own health, including reproductive care,” Maloney said.

A spokesman for Pressley told The Hill that the congresswoman participated in a protest against the “cruel and callous decision to overturn Roe v. Wade and strip away abortion rights for everyone who calls America home.”

Speier, who reportedly led the protest, tweeted she was, “Proud to march with my Democratic colleagues including ⁦⁦@DemWomenCaucus⁩ members, and get arrested for women’s rights, abortion rights, the rights for people to control their own bodies and the future and our democracy!”

u201cProud to march with my Democratic colleagues including u2066u2066@DemWomenCaucusu2069 members, and get arrested for womenu2019s rights, abortion rights, the rights for people to control their own bodies and the future and our democracy! #BansOffOurBodies #WeWontGoBacku201d

In June, the Supreme Court overruled its abortion precedents in the landmark Dobbs v. Jackson Women’s Health Organization decision, which said the Constitution does not protect the right to abortion. It was an unambiguous victory for the pro-life movement in America, which had campaigned and peacefully protested for Roe to be overturned in Washington D.C. for nearly 50 years without incident.

Ford raises price of electric F-150 Lightning by up to $8,500 due to ‘significant’ battery cost increases
IRS Hiring Spree Is Biggest Expansion of Police State in American History
For good, or ill, the Republican Party has placed itself in the orbit on Donald J Trump
Italians Say Ciao To Domino’s As Last Franchise Closes
MSNBC Anti-Trump Melodrama: ‘Vote As If Your Life Depends On It—Will We Survive?’