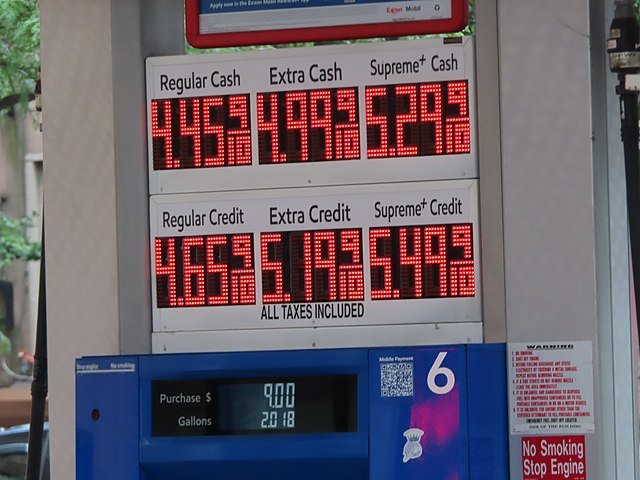 The current mindset of the global elite and climate extremists is to shut down any energy or food sources with which they disagree regardless of the crises those decisions create. Why can’t they think more strategically and perhaps achieve their goals without starving or freezing millions to death? Maybe they don’t want to.

Climate alarmists, like Biden and his compadres in Congress, are cutting off energy sources and those drastic measures are causing a global energy shortage. All of this is in hopes of pushing people to electric vehicles, solar, and wind. None of this is working as well as they predicted and families are suffering.

The extremists are also pushing expensive and environmentally-toxic electric vehicles as the solution to all that ills the world. Unfortunately, if there is not enough energy, regardless of the source, anything that runs on energy will struggle. By artificially creating an energy crisis, electric vehicles will feel the same hurt as everyone else as electricity prices rise due to massive demand spikes during a shortage. None of this is working as they predicted and most will suffer.

The climate scare mongers in Europe – and likely the U.S. soon – are implementing environmental regulations that make it impossible for farmers to survive which will cut off viable food sources in hopes of something magical taking its place – magical because there is nothing to take its place. None of this is working and everyone will suffer.

They will also have failed to achieve their goals of a non-fossil/nuclear-fueled world – by a ton. Check: India, China, Russia, Germany, etc

Europe is returning to coal, nuclear, and oil to deal with the fact that they attempted to cut nuclear off too early, are over-reliant on insufficient wind energy, and have become too dependent on Russia.

Texas is dealing with its own problems as the summer cooling season is coming on strong and their wind farms aren’t getting any wind. Shocker! I grew up in Texas – there is almost NEVER any wind during the hottest months. Relying on wind farms to help during the summer high-demand season was idiotic at best.

The Economics of a Bad Approach

The enviro-extremist approach is to create artificial shortages of critical products like food and energy in hopes that people will turn to less available, more expensive, and less viable sources. Unfortunately, those alternatives cannot produce enough food or energy to replace the current approaches. Ergo: shortages and massive price hikes.

Instead of creating artificial shortages to give alternatives a chance, utopia-seeking leaders should be fostering the technologies and approaches they like until those technologies actually show success in the form of over-supply. Imagine if the U.S. already had too much affordable energy from wind, solar, nuclear fusion, hamsters on wheels, or whatever. It might make sense to cut coal, natural gas, and nuclear fission plants. But, it only makes sense at that point. We are NOT there – not anywhere – and not even close.

Economics will ultimately decide which energy and food sources flourish and which do not. Hamstringing affordable, plentiful sources so that costlier and less reliable alternatives look better is doomed to failure and will hurt the majority of the global population.

The climate alarmists are in such a hurry that they’re literally doing it backward. The world can create enough new sources of power before we cut off the ones that currently work. Doing it the other way around is simply stupid.

Why Won’t They Do it the Right Way?

Obama tried massive subsidies to solar firms like Solyndra which cost taxpayers billions. That company produces exactly 0 watts of energy today. Biden and his cronies are doing the same thing, but they expect a different result – magically.

Their chosen winners – wind, solar and unicorn farts – are not as cheap, reliable, and abundant as coal, oil, and nuclear. Even tech genius Elon Musk has struggled to make solar profitable. They also aren’t as environmentally friendly as they would have everyone believe. Given all the negatives, they have to tilt the scales to artificially make contemporary energy sources look as awful as the new stuff.

When Will it Change

As blackouts, food shortages, and unaffordable energy prices take hold – like in Sri Lanka – the environmental extremists are going to be shown the door… that leads off a cliff … into hell. They won’t be missed. Anyone seen Sri Lanka’s former president lately? No?

ESG (environmental, social, governance) decimated the Sri Lankan economy, will likely cause starvation, and has incited a revolution that forced their former president to flee the country.

Farmers in the Netherlands, Spain, Poland, and Italy have swarmed government offices with their tractors to protest ‘green’ regulations that make it extremely difficult if not impossible for them to continue growing food for their nations and the world.

In the United States, the Biden administration’s war on energy has led to extremely high gas, heating oil, propane, and electricity prices. As energy gets more expensive, so does everything else. Have you seen your grocery bill lately? Pocketbook issues drive elections and Biden’s Democratic Party is about to have one of its worst-ever mid-term elections.

They’re doing it wrong, are screwing the world, and have achieved nothing.

China Walks Back Promise Not To Use Force In Taiwan ‘Reunification’
‘A targeted, unprovoked, pre-planned attack’ on Rushdie: What we know about suspect Hadi Matar
FBI, R.I.P.?
President Donald Trump Requests Return of Privileged Documents on Truth Social
‘Are You Kidding Me?’ CNN’s S.E. Cupp Told To Get Out Of Her Bubble On Mar-a-Lago Raid