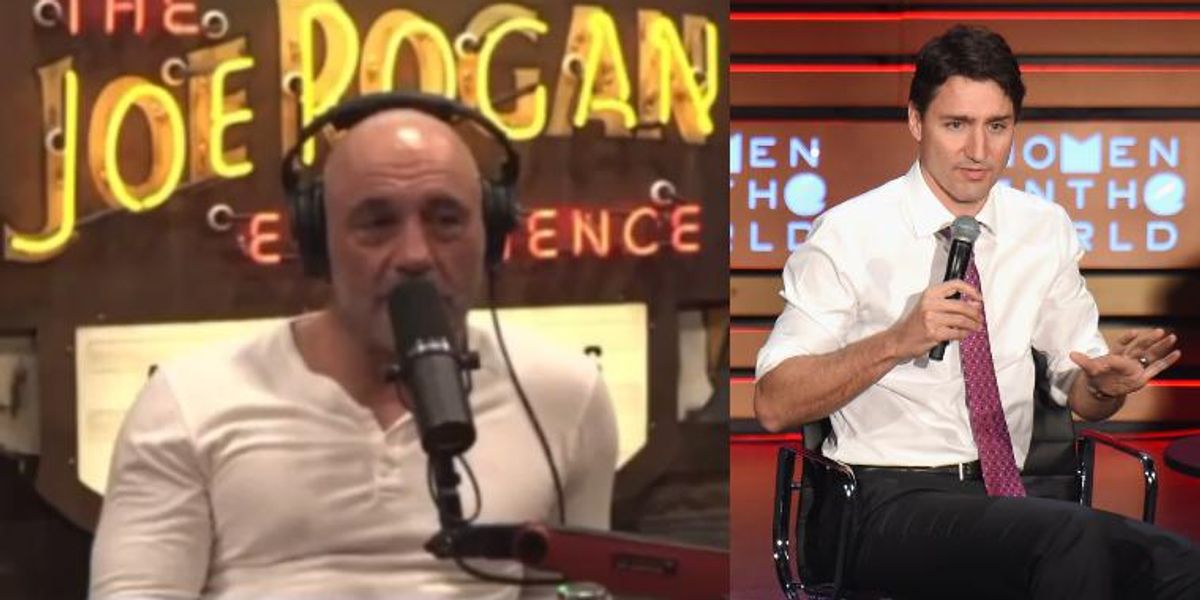 Joe Rogan didn’t hold back in recently lambasting Canadian Prime Minister Justin Trudeau. During Thursday’s episode of “The Joe Rogan Experience,” the prolific podcaster accused Trudeau of being a dictator.

“They gotta get rid of that guy,” he said of Trudeau.

Rogan admitted that he liked Trudeau before the pandemic.

“I was like he’s a handsome guy. Seems sweet. Good looking guy, confident, good talker,” he complimented Trudeau. “And during the pandemic, I’m like, ‘Oh, you’re a f***ing dictator. Oh, you don’t like criticism. You’re trying to shut down criticism by saying all your critics are misogynists and racists.'”

During the anti-vaccine mandate protests in 2021, Trudeau called the large trucker protest a “small fringe element in the country.” He added that the protesters don’t believe the science and lash with “racist, misogynistic attacks.”

“He’s gross, he’s a sketchy guy,” Rogan said of Trudeau. “He’s got some shaky f***ing deals. Like why do you want everyone to get injected every four months? They don’t need that anymore. Like what are we doing?”

Rogan added that international travelers can’t visit Canada unless they are fully vaccinated against COVID-19.

“Unless you qualify as a fully vaccinated traveler, you cannot enter Canada for reasons such as:

Segura chimed in and noted that New York City has vibes of the peak of the pandemic.

“I was just in New York,” Segura said. “Everyone was masked up everywhere. I was like, ‘What’s going on, why is everyone so masked up?'”

Rogan noted that Austin was a far different environment when it came to COVID.

This isn’t the first time that Rogan has bashed Trudeau.

Trudeau said, “We have a culture where the difference is guns can be used for hunting or for sport shooting in Canada, and there are lots of gun owners and they’re mostly law respecting and law-abiding, but you can’t use a gun for self-protection in Canada.”

Rogan said he was “disgusted” by Trudeau’s remarks.

“He said you don’t have the right in Canada to own a gun to protect your life. It is one of the most wild things I’ve ever seen anybody say, because first of all, I don’t believe it’s true,” the Spotify host said.

In 2019, Rogan ridiculed Trudeau for his bumbling answer about how he claimed that his family doesn’t use plastic bottles.

iOS’s Facebook and Instagram Apps Can Monitor User Interactions
California governor proposes $1.4 billion plan to keep last nuclear plant open
Previously rabid fans of Kamala Harris are losing faith: ‘Did I just make up a person in my head who could do those things?’
The Biden Administration Is Acting Guilty of a Coverup After Mar-a-Lago Raid
Hammer-wielding shoplifter bashes head of 70-year-old laundromat worker who tries to stop theft. Crook apparently needed some free bleach.