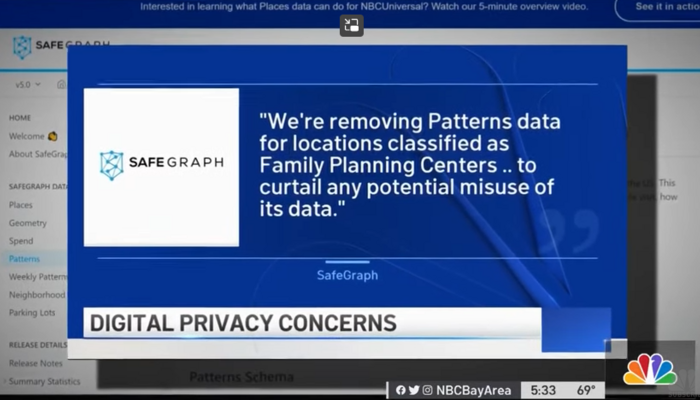 Hypocrisy on the front page of the New York Times Business section Friday, with Natasha Singer and Brian Chen reporting on our scary new world where abortion laws are left to the states: “In a Post-Roe World, the Future of Digital Privacy Looks Even Grimmer.”

Welcome to the post-Roe era of digital privacy, a moment that underscores how the use of technology has made it practically impossible for Americans to evade ubiquitous tracking.

In states that have banned abortion, some women seeking out-of-state options to terminate pregnancies may end up following a long list of steps to try to shirk surveillance — like connecting to the internet through an encrypted tunnel and using burner email addresses — and reduce the likelihood of prosecution.

Even so, they could still be tracked. Law enforcement agencies can obtain court orders for access to detailed information, including location data logged by phone networks. And many police departments have their own surveillance technologies, like license plate readers.

Pro-abortion paranoia aside, the Times is putting its hypocrisy over “digital privacy” on full display. Because when it comes to fighting so-called right-wing misinformation, Times reporters are eager to play the censorious hall monitor of internet discussion, and to heck with any privacy concerns.

….the state of digital privacy is already so far gone that forgoing the use of digital tools altogether may be the only way to keep information secure, security researchers said. Leaving mobile phones at home would help evade the persistent location tracking deployed by wireless carriers. Payments for prescription drugs and health services would ideally be made in cash. For travel, public transportation like a bus or a train would be more discreet than ride-hailing apps.

Reproductive privacy has become so fraught that government officials and lawmakers are rushing to introduce new policies and bills to safeguard Americans’ data.

The article recommended virtual private networks and encrypted messaging “to combat surveillance, including the chat services WhatsApp and Signal. All of this is for something no state is trying to do.

Which is very strange, because Chen contributed to a Q&A article with Kevin Roose in February 2021 that smeared Signal as part of the problem: “Are Telegram and Signal the Next Misinformation Hot Spots?”

Showing a complete disregard for fears of law enforcement using the internet to surveil abortion-seekers, tech reporter Kevin Roose in 2021 warned of the danger of letting people talk where law enforcement and reporters couldn’t listen in:

So there’s now this debate about whether it’s good that all these unsavory characters from the dregs of the internet are disappearing from big social platforms, or whether it’s dangerous to have them congregating in spaces where researchers, journalists and law enforcement can’t keep tabs on them as easily.

Taylor Lorenz, the former crybully Times reporter who is now the Washington Post’s problem, also waged a strange war on internet privacy during her time with the paper, shown by her obsession with eavesdropping on Netscape co-founder Marc Andreessen in his talks on Clubhouse, falsely claiming Andreessen used “the r-slur” during a virtual meeting.