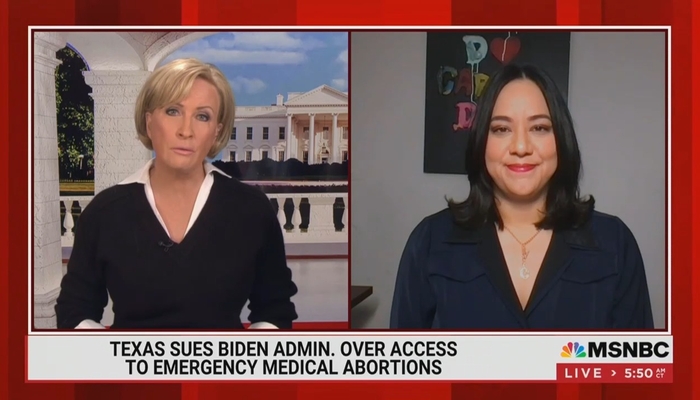 On Friday, co-host of MSNBC’s Morning Joe Mika Brzezinski decided to highlight the “dangers” of a post-Roe America by bringing on pro-choice Texan Rochelle Garza, the Democratic candidate running against Ken Paxton in the attorney general race. And of course, the interview was just a vehicle to tee up Garza to bash her opponent over abortion restrictions.

At the top of the interview, Brzezinski asked her to “explain to us why you feel your opponent needs to be replaced.” Clearly, Garza didn’t hear Brzezinski introduce her to those watching because she started off saying “My name is Rochelle Garza, I’m running for Attorney General here in the state of Texas.”

As to why she decided to run, she said her reason was that she was “angry.” Garza detests what Paxton is doing in Texas regarding abortion, claiming that he is advocating for “state-sanctioned femicide” and “the intentional killing of women.” She fears that if he wins in November he will turn “Texas into a morgue” and take that “nationwide.”

After that take, Brzezinski suggested she was trying to “comprehend all the different extremes” and lobbed another softball: “What would you say, I mean, what is your argument about who and what your Republican counterparts stand for?”

Garza came in a little too hot with her take once again. She defined what the GOP stands for as “absolute extremism” and that “stripping” women of their “human rights” simply “wasn’t enough for them.” She warned Brzezinski that “they’re going after all women.”

She then tried to spin the narrative on her opponent, saying that he “should be worrying about his own criminal matters” and “not attacking women.”

How is saving the unborn—including unborn baby girls “attacking women?”

Brzezinski pointed out that Paxton says “he’s not trying to take away protections of women in the case of the mother’s life being threatened.” And asked Garza what her thoughts were. Garza responded calling his claim “absolutely not true.” He is apparently “requesting that emergency services not be provided to women that need to have an emergency abortion,” calling his actions “cruel.”

Now, very few women actually need an abortion to save their own lives, and those abortions count as a very low percentage. And, if both mother and child are in danger, doctors are at a stalemate and will rightfully choose to save the mother anyway. Those cases should not even be considered as “abortions.”

Perhaps Garza and other lefties like her should educate themselves on these very unlikely instances; and should take classes on logic, maybe take up yoga. They might not take people so aback if they’re less extreme and more level-headed.

This example of extreme, lefty craziness was made possible by Liberty Mutual and Sleep Number.

MIKA BRZEZINSKI:  Joining us now, Democratic nominee for Texas Attorney General, Rochelle Garza. She is hoping to unseat Paxton in November. Good to have you on the show. Explain to us why you feel your opponent needs to be replaced.

ROCHELLE GARZA:  Well thank you for having me on. My name is Rochelle Garza, I’m running for Attorney General here in the state of Texas. I’m a civil rights attorney, I’m a new mom to a 3-month-old daughter and I’m angry. I’m running against Ken Paxton because I’m going– I want to stop what he is doing. This is state-sanctioned femicide he is advocating for, he is advocating for the intentional killing of women. We need to vote him out before he turns Texas into a morgue and takes that nationwide.

BRZEZINSKI: So I’m trying to, you know, comprehend all the different extremes in this case, which really highlights exactly what you’re talking about. What would you say, I mean, what is your argument about who and what your Republican counterparts stand for?

GARZA: This is absolute extremism. Taking away rights from women, like they did with the fall of Roe, wasn’t enough for them. Now, they’re going after all women. You know, this is just another example of this extreme agenda that we are seeing from people like Ken Paxton.

Ken Paxton should be worrying about his own criminal matters. He has been under criminal indictment for over seven years. He’s under FBI investigation and has ties to the January 6th insurrection. He should be worrying about those issues instead of attacking women, and Texans aren’t going to put up with this because this is not who we are, and we are going to vote him out come November.

BRZEZINSKI: So it took a while for Paxton to admit that this case even happened, but he also says he’s not trying to take away protections of women in the case of the mother’s life being threatened. What do you say to that?

GARZA: Well, that’s absolutely not true. That’s exactly what he is litigating. He is requesting that emergency services not be provided to women that need to have an emergency abortion. That is the heart of this litigation. So it is cruel, what he is doing, and he is lying if he is saying otherwise.