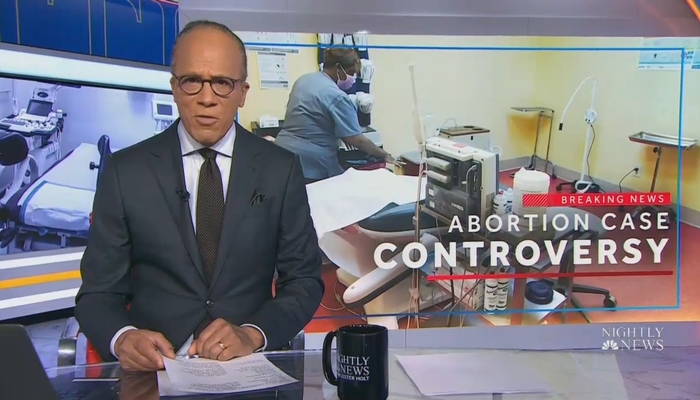 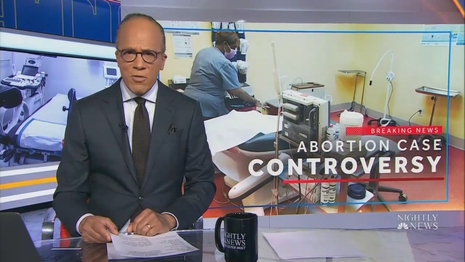 On Thursday,  correspondent María Vargas Pión for the Spanish language channel Telemundo knocked on the door of the mother of the 10-year-old Ohio rape victim who told the reporter that the girl is “fine” and “everything that they’re saying against him [the rapist] is a lie.” Despite this drastic turn in the tragedy surrounding this tragic rape case, all three evening news broadcasts ignored the story and focused instead on the Indiana Attorney General investigating the abortionist who performed an abortion on the 10-year-old girl.

On ABC’s World News Tonight, anchor David Muir spent 36 seconds on the Ohio rape case which focused entirely on the Indiana Attorney General’s investigation into the abortion doctor Caitlin Bernard who failed to notify the state of Indiana that she was going to perform the abortion.

“The Indiana doctor who performed that procedure is now under investigation. The Indiana attorney general saying he is investigating the doctor’s license and whether she failed to report the child was raped” Muir reported. “The family pointing out the child had to go to Indiana because there are no exceptions in Ohio after Roe was overturned.”

CBS Evening News had the same priorities, failing to report on the mother defending her daughter’s rapist. Giving her report for CBS, reporter Elaine Quijano proclaimed that “since the Supreme Court overturned Roe v. Wade, Ohio is at least one of nine states which make no exceptions for rape or incest. In Indiana, abortions are legal up to 22 weeks.”

Yet Quijano failed to mention that Ohio Attorney General Dave Yost had previously stated the girl could’ve received an abortion under her unique circumstances.

During his report for NBC Nightly News, national correspondent Gabe Gutierrez read Yost’s statement on the rape case without noting that the girl could’ve received an abortion in Ohio if her parents notified the proper authorities: “My heart aches for the pain suffered by this young child. I am grateful for the diligent work of the Columbus police department in securing a confession and getting a rapist off the street.”

But the truth doesn’t matter to the leftist news networks. Only the Democrat Party narrative is newsworthy to them. Even the mother of a 10-year-old rape victim defending the illegal immigrant who did it isn’t news since it might draw attention to the fact that he snuck into the country during former President Barack Obama’s reign. That would make Obama look bad so that can’t be allowed to happen.

This disgraceful bias by omission from the three networks was made possible by Dawn on ABC, TD Ameritrade on CBS, and Liberty Mutual on NBC. Their information is linked.

To read the transcripts of each segment click “expand”:

DAVID MUIR: Back here at home tonight, and to news in that disturbing case of a 10-year-old Ohio girl who had been raped who went to Indiana to get an abortion after Roe was overturned. No exceptions in Ohio for rape. Well tonight, the Indiana doctor who performed that procedure is now under investigation. The Indiana attorney general saying he is investigating the doctor’s license and whether she failed to report the child was raped.

The family pointing out the child had to go to Indiana because there are no exceptions in Ohio after Roe was overturned. Tonight, a lawyer for that doctor, Dr. Caitlin Bernard said she, quote, took every appropriate and proper action in accordance with the law. She has not violated any law, according to the lawyer.

NORAH O’DONNELL: Turning now to the abortion case that has gained international attention after a ten-year-old rape victim from Ohio was taken to Indiana for the procedure. Here is CBS’s Elaine Quijano.

ELAINE QUIJANO: Tonight Indiana’s Republican Attorney General Todd Rokita told CBS News that his office is investigating whether Dr. Caitlin Bernard, a local ob-gyn physician followed state law which requires her to report that she performed an abortion on a ten-year-old girl who was a victim of rape. The girl traveled from Ohio where most abortions are illegal, once there is cardiac activity, usually at six weeks. Yesterday, Dr. Bernard tweeted my heart breaks for all survivors of sexual assault and abuse. I am so sad that our country is failing them. Elizabeth Nash works for an abortion rights group.

ELIZABETH NASH (GUTMACHER INSTITUTE, PRINCIPAL POLICY ASSOCIATE): That the best thing for a sexual assault survivor who needs an abortion is not an abortion ban.

QUIJANO: Since the Supreme Court overturned Roe v. Wade, Ohio is at least one of nine states which make no exceptions for rape or incest. In Indiana, abortions are legal up to 22 weeks.

How concerned are physicians now about potentially being in legal jeopardy?

NASH: They are particularly concerned because more than anything, providers want to provide care.

QUIJANO: The girl’s case sparked international attention after President Biden made reference to it as he signed an executive order to protect access to abortions.

QUIJANO: Yesterday, 27-year-old Gerson Fuentes was arraigned in Ohio for allegedly raping the girl. Tonight the Indiania doctor’s lawyer released a statement saying quote, my client, Dr. Caitlin Bernard took every appropriate and proper action in accordance with the law and both her medical and ethical training as a physician. She followed all relevant policies, procedures, and regulations in this case. The attorney says they are considering legal action to clear her name. Norah?

LESTER HOLT: Another major story shining a light in the deep divide in this country over abortion. A 27-year-old man facing charges for the rape of a 10-year-old girl who had to travel to another state to get an abortion. Now after many conservatives cast doubt on her story, they’re walking it back. Here’s Gabe Gutierrez.

GUTIERREZ: According to court documents Fuentes confessed to raping and impregnating a 10-year-old girl. A detective said she then traveled from Ohio which has banned most abortions to neighboring Indiana to end the pregnancy. The case has become the latest flash point in the national abortion debate following the Supreme Court’s reversal of Roe v. Wade. It was first reported earlier this month by the Indianapolis Star newspaper citing a single source, an ob-gyn in Indianapolis. The story went viral. Last week President Biden brought it up.

GUTIERREZ: But over the next several days, Republicans including Ohio’s Attorney General cast doubt on the story.

DAVE YOST (OHIO ATTORNEY GENERAL): We have regular contact with the prosecutors and local police and sheriffs. Not a whisper anywhere.

GUTIERREZ: Then yesterday after the suspect’s arrest, he issued a written statement. “My heart aches for the pain suffered by this young child. I am grateful for the diligent work of the Columbus police department in securing a confession and getting a rapist off the street.” The Wall Street Journal editorial board had also previously questioned the story and now its published a new editorial correcting the record. Writing it appears President Biden was accurate. Still, Indiana’s Republican attorney general says he’ll investigate the ob-gyn who performed the procedure for failing to report it. That ob-gyn says in part, doctors must be able to give people the medical care they need when and where they need it. The case now highlighting deep divisions in this country as states scramble to clarify their own laws from supporters of abortion rights.

DR. MICHELLE BROWN (NORTHWESTERN MEDICINE OBGYN): It’s a hard truth to realize that these horrible things are going to happen to children and other people in your state because of the really severe restrictions that are placed.

GUTIERREZ: To those who oppose abortion.

ERIC SCHEIDLER (PRO-LIFE ACTION LEAGUE EXECUTIVE DIRECTOR): With so many questions about what really happened, it’s a real shame that the Biden administration rushed to exploit this poor little girl’s situation.

GUTIERREZ: And today Republicans blocked an attempt by Senate Democrats to pass a bill to codify the right of individuals to cross state lines for an abortion. Lester?

From a $114 billion profit to a $197 billion deficit: The federal gov’t might lose big on student loan debt
‘Not a Red Wave’; CBS Hopes Dems Will Focus More on Abortion, Trump to Keep the House
Undermining Legacy of Jefferson and Madison in Their Own Homes
Column: Only Some Terrorist Takedowns Are Unifying and Patriotic
TOO FUNNY: President Trump DESTROYS “Dementia” Joe Biden on His Second COVID Diagnosis