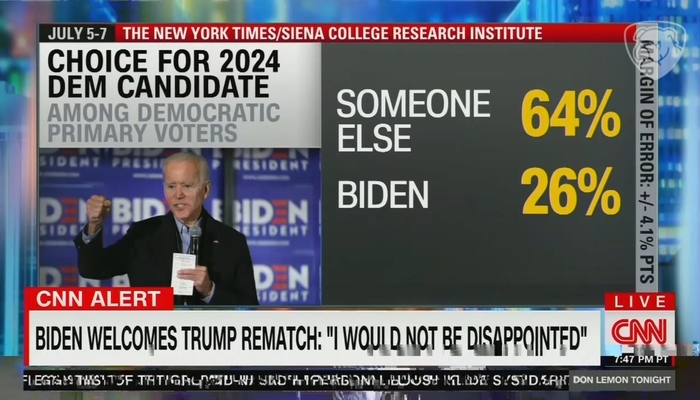 In the face of 40-year-high inflation and abysmal poll numbers where even Democrats don’t want him to run again, Don Lemon was in a foul mood on Wednesday’s Don Lemon Tonight. He scoffed at Biden’s talk about unity by suggesting the American people “are dug in on both sides.” Like CNN and Don Lemon aren’t dug in?

As highlighted in a soundbite, Biden stated that he ran for President for three reasons. Number one, “to restore the soul of America, to get back to who we are as a people… the way we talk to one another, the way we treat one another. The second thing was to rebuild the backbone of this country. The middle class, when the middle class does well, everybody does well.” Finally, ending with “to unite the country,” admitting that “I still haven’t accomplished the third piece and that’s what I’m trying to do.”

Lemon told his guest, former Obama strategist David Axelrod, “I’m not sure if he was elected in large part because of the country – because of the unity… I think people wanted sanity, and they wanted a steady hand.”

Axelrod seemed to ignore the current state of our nation when he stated, “He’s [Biden] gotten more done than anybody thought he would… He got some things done.” He continued: “I think he deserves credit for that.”

Axelrod continued his support by saying, “I think he is in command of what he’s doing… he’s, you know, offered strong leadership.”

Even with that, he tried to tell Lemon the hard truth: “it’s going to be a very difficult November,” suggesting what the President needs to do now is make clear to the public what the Republican Party is preaching. Assuming he means to make it seem as though the Democratic Party is the way to go, Axelrod said, “he has to create a choice for the people.”

With the approval ratings low and recent numbers showing that 64 percent of the general public wished someone else would run in 2024, Axelrod stated that while that number looks big, the main objection people have to Biden running again is his age, a problem “that’s not going to get better. He’s not going to get younger.”

Coming in to defend the President, Lemon took a swipe at former President Ronald Reagan, chiding he “wasn’t a spring chicken.” He then hinted at the long-debunked claims he was suffering from Alzheimer’s while in office, suggesting he was “having issues… there were concerns about Reagan at the end of his term

Pointing to a poll that shows even with “all the bad news with the economy that he has now,” the President still leads Donald Trump 44 percent to 41 percent (a three-point difference).

What he failed to mention was that the margin of error was 4.1 percent. And with the Democrats and the liberal media pushing the January 6 hearings, shouldn’t Biden be doing better?

This segment is sponsored by DoorDash and Disney. Their contact information is linked.

DON LEMON: President Biden in Israel tonight on his first Presidential visit to the Middle East, sitting down for an interview with Israel Channel 12, talking about why he ran for President and whether he’s accomplished his goals. Listen.

PRESIDENT JOE BIDEN: I was running for three reasons. And no one in me, my campaign agreed with. I said, number one. To restore the soul of America, to get back to who we are as a people and the way we — and the way we talk to one another, the way we treat one another.

The second thing was to rebuild the backbone of this country. The middle class, when the middle class does well, everybody does well. The poor have a way up and the wealthy stay wealthy.

And thirdly, to unite the country. I still haven’t accomplished the third piece and that’s what I’m trying to do.

LEMON: So, let’s talk about all the things Biden is facing now:  bad economy, pandemic that won’t quit, a war overseas, major fault lines here over gun rights, abortion rights. How is he going to unite the country in the next two years?

He has to create a choice for people and he has to make clear what the Republican party is offering. And that by its very nature involves being a little more contentious, more comparative, more challenging. So, you know, I have no doubt that this is what’s in his heart. He is by his very nature, a conciliatory person. He’s worked across party lines for half a century.

LEMON: But is that — is that reality right now? Is that realistic right now? Because listen, I’m not saying that the country shouldn’t be united, but I don’t think the country wants to be united. I think — I think people are dug in on both sides.

AXELROD: You know, Don, I think there are a lot of people in this country who want to see people working together.

LEMON: That would be great.

AXELROD: I think there are a lot of people in this country who are alarmed by the shrill voices. But I — but I also think that the parties themselves are not in that place that the activists, particularly the politicians are not necessarily in that place.

Joe Biden was elected because he stood for that. That’s what the country voted for. But right now, you know, some of those things that he most values are not what’s needed. He needs to be more contentious. He needs to really draw the choice for people.

But I will say this. Say what you will about cooperation, bipartisanship, and so on. He’s gotten more done than anybody thought he would. The infrastructure bill, he obviously got the Rescue Act. He got the gun bill. He got some things done. And I think he deserves credit for that.

But there is a big stark choice now, and it goes to the sort of tone and tenor of the parties and what the Republican Party stands for. The Republican Party that exists today is not the one that Joe Biden grew up with all those decades in the United States Senate.

AXELROD: Yes. And, Don, look, discontent is not unheard of among Democrats or Republicans when the president isn’t doing well in the polls and you’re headed into a fall campaign. You know, we felt some of that when I was in the Obama, White House. The fundamental thing I’d be worried about that those are large numbers. Sixty-four percent is a large number, but then also when they were asked, they asked people to volunteer what it was that they objected to about Biden, the people who said they did want him to run.

LEMON: Well, Reagan wasn’t a spring chicken. I mean, I was alive for that.

AXELROD: Reagan was — Reagan was younger when he left office than the president is now.

LEMON: He’s having issues with —

But, you know, when you are going to face the voters and ask them at 82 for another term, and you’re going to be closer to 90 than 80 at the end of that term, that is a very, very difficult case to make.

AXELROD: And ultimately, he’s going to have to confront that question.

LEMON: Yes, well, let’s just put it, even with the headwinds he still leads Trump by just three points, 44 percent.

LEMON: To 41 percent and the headwinds and with the — all of the bad news with the economy that he has now. So, we’ll see. You’re right. Can’t predict it. Thank you, David. Thank you. I really appreciate it.

BIG TECH COLLUSION? Facebook Helped Liberal Axios Sell for $525M: Report
Facebook defends itself after handing over chat messages to police investigating abortion
After years of rapid growth, the housing market is showing clear signs of slowing down
‘A targeted, unprovoked, pre-planned attack’ on Rushdie: What we know about suspect Hadi Matar
Why the FBI has raided Trump’s estate – and what it is investigating