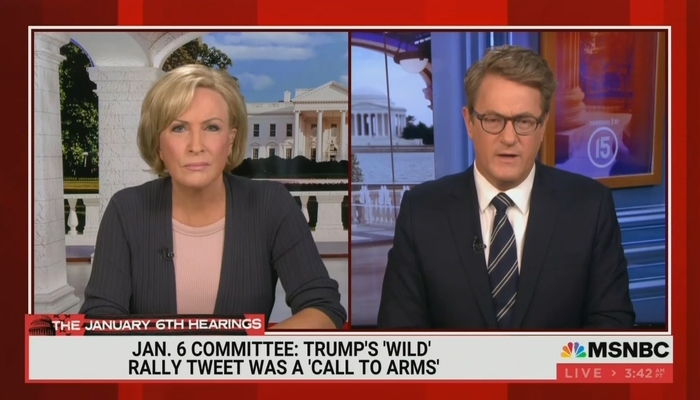 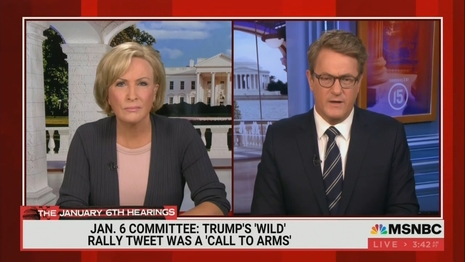 On Wednesday’s Morning Joe, Joe Scarborough went on a rant against the DC Police Department, the National Guard, and the FBI, for their failure to respond promptly to the Capitol Hill riot. “Were they eating donuts?” surmised Scarborough, deploying that derogatory cliché about the police.

Scarborough didn’t frame his complaint in terms of then-President-Trump’s failure to order those agencies to respond. To be sure, Scarborough roundly condemned Trump, calling him a “sick man” and a “fascist” who was “excited” by the violent events of the day and who should be “arrested for sedition.” But Scarborough was suggesting that those agencies should have acted on their own initiative to respond.

At the end of his rant, Scarborough again poured gasoline on the fires of racial and religious resentment. Repeating an accusation that we noted last year, Scarborough said:

“Most of the people you see in these videos are white. I said it the day after, if these were black protesters, you better believe the cops would have been up there in a second. If they were Muslims, there would have been cops standing on top of the buildings with rifles and gunning them all down. I mean, there’s no doubt! There’s no doubt in my mind that these people were allowed to sit out there with Confederate flags and Trump flags, and desecrating the cross of Jesus Christ, because they were white. It’s that simple!”

Scarborough didn’t attempt to offer any evidence in support of his sickening suggestion. Does he really imagine that the DC police force, which is majority black, and whose chief is African-American, would have indiscriminately opened fire on black or Muslim protesters? Or that the woke FBI would have done so?

But Scarborough could care less about recklessly fanning the flames of racial and religious resentment—just so long as doing so lets him virtue-signal to his leftist ilk.

JOE SCARBOROUGH: And why could we sit and watch our TV for hours, because you know they were sitting there watching their TV for hours, before they did anything. If you’re, if you’re on D.C. Police and you see this — I’m sorry, I’m about to — I’m about to say some profane things right now. I’m not going to.

But just look at this. You’re a D.C. Police officer. You run the D.C. Police department. You run the National Guard. You run the FBI. And you’re seeing these images, and you’re seeing them live on television. And you do nothing! Nothing. We heard that Donald Trump waited three hours, over three hours before he did anything. He watched the violence. He watched police officers being brutalized. Well, of course, we understand, he’s a sick man. He’s a fascist. We understand that he was actually rewinding and rewatching the most violent footage because he was so excited by what he was seeing. But what about D.C. cops?

MIKA BRZEZINSKI Well, we just have to —

SCARBOROUGH: We’ve been watching — no, when they’re watching police officers being brutalized and beaten to, within inches of their death.

What are they doing? Sitting eating donuts in, in, in, in their headquarters? What are they doing? What was the FBI doing? What was the National Guard doing? How the hell did this happen? Now listen, I want to get to the bottom of all of this, Mika. I want to find out, obviously, what Donald Trump did. He, I said the day after he should be arrested for sedition. That Rudy Giuliani should be arrested for sedition.

But I want to know what the hell happened to our law enforcement agencies that allowed this to happen.

Most of the people you see in these videos are white. I said it did the day after: if these were black protesters, you better believe the cops would have been up there in a second. If they were Muslims, there would have been cops standing on top of the buildings with rifles and gunning them all down.

I mean, there’s there’s no doubt! No doubt in my mind that these people were allowed to sit out there with Confederate flags, with Trump flags, desecrating the cross of Jesus Christ, because they were white. It’s that simple!

Parents demand sexually explicit books be removed from Oklahoma public school libraries
NPR gets hammered for saying Florida license plates with the Gadsden flag symbolize a ‘dangerous far-right extremist ideology’
Video: NC Lt. Gov. Mark Robinson delivers rousing speech at CPAC calling for conservatives to save America from ‘socialist horde that is trying to drag it down into the pit of hell’
Allbirds ‘dramatically’ slows pace of new hires as loss widens
Jeffrey Toobin’s time at CNN comes to an end