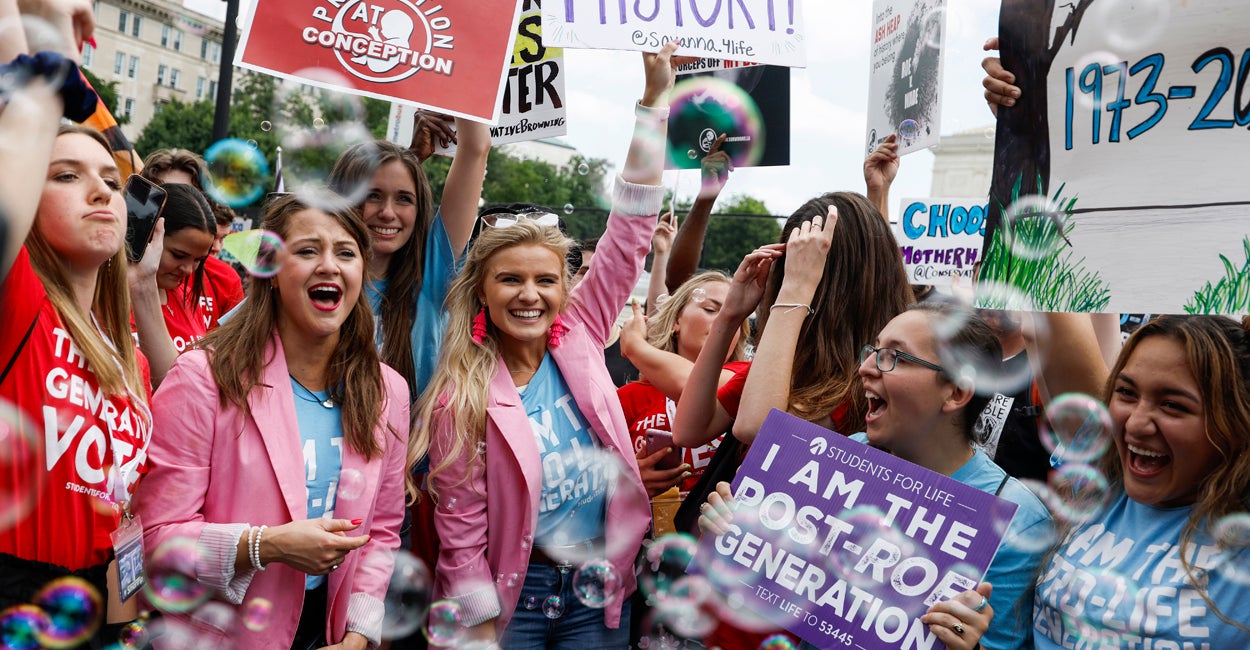 Editor’s note: The Daily Signal’s audience greeted the news of the Supreme Court’s overruling of Roe v. Wade with both joy and new resolve. Here’s a sampling from the mailbag at letters@dailysignal.com.—Ken McIntyre

All I could think of was that in a little while, they will take me upstairs and kill my baby. I finally left in tears, still pregnant. It was one of the best decisions I’ve made in my life.

As the highest court in the land overrules its 1973 decision (“Supreme Court Overturns Roe v. Wade in Dobbs Decision“), my son is now 41. I also have an 18-year-old granddaughter.

It wasn’t easy, but life isn’t easy. I’m very thankful for the decision I made. I came so close to killing my baby.

My heart goes out to everyone who has had an abortion. I pray they feel God’s amazing love and forgiveness.—Vicki Neighbours, Falconia, Wis.

Dear Daily Signal: This is one of the most surreal moments I’ve ever experienced (“Life Wins: In Overturning Roe v. Wade, Supreme Court Issues Victory for Rule of Law“).

After decades of marching, advocating, and praying, Roe v. Wade is finally finished; the false “constitutional right” to kill a preborn child has been erased by the Supreme Court.

We are experiencing a truly historic victory for life. I rejoice for the lives that will be saved by the reversal of this horrific 1973 decision.

However, this victory is just the beginning. Our work to transform our culture and make abortion unthinkable is just getting started.

Abortion advocates are in an uproar, pushing lies that women will die, life-saving medical care will be eliminated, and the reversal of Roe will lead us back to the Dark Ages.

Remember, abortion is still legal, and even subsidized, in many states. The killing of preborn babies has not stopped.

We now are fighting an uphill battle against an onslaught of disinformation and deceit—the same lies that led to the senseless killing of 63 million innocent children.—Jeff Baker

Dear Daily Signal: Thank you for showing the positive, pro-life young people who have been so courageous in sending God’s message out: We all come from our mothers’ wombs (“In Photos: How Pro-Lifers Are Celebrating Dobbs Decision“).

Now the prayer movement must continue to ask the Holy Spirit to convert our society, so there is no need for abortion.—Christine Strasser

I cannot be happier with the Supreme Court. After almost 50 years of federal acceptance in the courts, the justices have determined that abortion never was included in the Constitution as a right, pushing it back to the states.—Ronnie Sisneros

My eyes are filled with tears, as I’ve just read the commentary by Cathy Harris stating how she regretted her abortion and has done all she could to stop this in our country (“I Had an Abortion. Here’s Why I Want Roe Reversed“).

I, too, suffer such agonizing pain from an abortion. “What kind of person would lay there and let a man kill her baby?”

I know God has forgiven me, but the pain of the irreparable act of murder is excruciating. I wish I had that child.—Karen Flores

What makes me sad about this debate is the widespread ignorance of the Constitution being demonstrated.

I think that both sides need to heed the advice of author and commentator Thomas Sowell, who advocates that if you pay no penalty for being wrong then you should not be the decider.—Ken Marble, Littleton, Colo.

I call for June 24, the day of the release of the Supreme Court’s Dobbs decision, to be a national holiday, to celebrate annually the liberation of the unborn from the threat of abortion.

And it shall be called Trumpteenth in honor of President Donald J. Trump, without whom this amazing miracle would not have been possible.—D. Van

Those who are violating the law by protesting at the Supreme Court justices’ homes should be arrested and prosecuted.

To my mind, Garland and Descano are corrupt, just like the Biden administration. I hope and pray that Virginia Gov. Glenn Youngkin takes action.—Phillip Stacy

Dear Daily Signal: Douglas Blair’s report on pro-abortion activists’ publication of the home addresses of Supreme Court justices is so disheartening (“Justices’ Home Addresses Blasted on Social Media With Zero Consequences“). I am so sick of the unfathomably deplorable tactics of the left.

I think of the peaceful protests by pro-life Americans (the March for Life in the nation’s capital, the overregulated sidewalk vigils at Planned Parenthood facilities, and 40 Days for Life, among many others); no listing of the addresses of the seven justices who created the Roe v. Wade abomination.

I do recall that there were some horrendous acts against abortion providers and the abortion abattoirs in the 49 years of Roe v. Wade. But those criminals were arrested and their acts were punished. Not so the radical leftists who are allowed to be a law unto themselves.

Sometimes I wish that pro-life and conservative people would be a little more disruptive. In the end, I hope working peacefully and lawfully, but hard, will win the day. Our country then will have a semblance of law and order and equality in the justice system—not the totally unequal enforcement of the law, which is the current state of affairs.—Elizabeth Corr

Rules for thee, but not for me. That seems to be the rule of thumb for some people.

By the way, were the addresses of the three liberal Supreme Court justices posted? Just wondering why or why not.

No chance for pro-lifers to protest their decisions in this way. That wouldn’t have mattered; they know it’s against the law, so they wouldn’t do it. It’s called respect.—Emma Gifford, Naples, Fla.

Conservatives should mount sustained, noisy demonstrations in front of the homes of prosecutors who refuse to prosecute the Supreme Court protesters (“What We Saw During ‘Night of Rage’ Pro-Abortion Protest“).

Of course, there is the risk of arrest—sweet hypocrisy for sure—but if we are unwilling to take risks, we will be strangled by the ruthless left.—Edwin Holstein

What hypocrites. Hide behind black umbrellas in masks. I guess they’re not proud of themselves.—Shirley Hirsch

I think we all need to stop reinforcing these pro-abortion activists’ bratty and aggressive behavior by putting it on display.

If/when protests escalate to a dangerous level, have protesters legally removed from the environment.—Jane Wilhelm

“Many states in this country still recognize a woman’s right to choose,” Biden is quoted as saying. “So, if a woman lives in a state that restricts abortion, the Supreme Court’s decision doesn’t prevent her from traveling from her home state to the state that allows it. It doesn’t prevent a doctor in that state from treating her.”

Women will have a problem, however, because as a result of Obamacare, young people under age 26 who must be covered by their parents’ insurance are unable to access health care outside their parents’ state. Maybe this situation will get their attention to this unfair development.

Personally, I think the whole Obamacare mess should be canceled. My grandson had to quit a good job and move to the state where his parents live to use their insurance to get medical care; then he couldn’t get work there and has sunk into a funk.

Dear Daily Signal: I just finished listening to “The Daily Signal Podcast” for June 28, which discusses resources available for women and men who are dealing with unexpected pregnancies.

I’m glad a lot of resources are available, but that primarily means for single moms. I don’t care how much assistance is given to a single mom during pregnancy and up to when she has the baby; it’s not going to help her much after the baby has been born, especially if she has other children.

I found myself angry after listening to the podcast, though, because it seems like you are addressing the wrong problem. If the only thing that happens because of the Supreme Court’s decision to overrule Roe v. Wade is that more babies are born to single moms, then we have lost the battle.

We need to be encouraging Americans to get back to traditional, godly morality so there are very few unexpected pregnancies and people aren’t sleeping around with anybody and everybody whenever they want. That’s what we should be fighting for, and it’s going to be a long battle.

For the past 18 years, in the twilight of my legal career, I have been helping people resolve legal issues when they hit bottom in their life, either through drugs, alcohol, bad decisions, or whatever. I’ve met with many women who have babies from multiple fathers, and the fathers are usually in the wind and out of the picture.

That’s the problem we need to be fixing. We need stable, two-parent families (a mom and dad) who have a clue about how to live, plan, work, and have a budget. That’s what we should be striving for.—Jim Richardson, Oro Valley, Ariz.

Thank you for a great, informative article. I would like to add that you omitted mention of the pregnancy cocktail or the morning-after pills available for termination of pregnancy.

I also would like ask of most women who are contemplating abortion: Why does it require more than 15 weeks to decide?—Thomas Fugate

Let’s educate women on the use of birth control rather than abortion, which was never meant to be used for this purpose.

Today we have more and safer types of birth control methods than ever before. Women and men still have choice; they just need to learn to use it before sex and not after, and use it responsibly.

The left has shown its true colors in attacking pregnancy centers. If leftists truly cared about women who find themselves facing a crisis pregnancy, why would they be attacking the very organizations who for years have been reaching out to and supporting these women?

If they cared, they would join with pregnancy resource centers to give more and better health care to women through these organizations. Even better, all the tax dollars that have been funneled to Planned Parenthood now can go for true women’s health issues.—D. Cuban