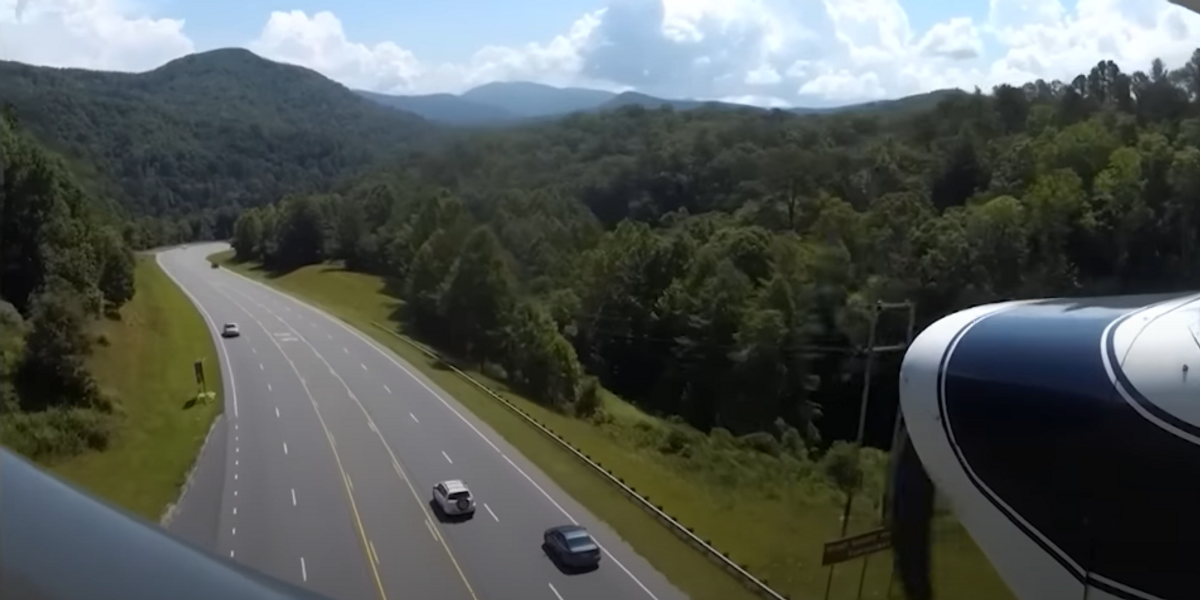 Vince Fraser needed to land his 1967 Aero Commander single-engine plane. However, he only had available to him a public highway and not a runway. Without the runway option, the novice pilot and Marine veteran was able to perfectly land his plane on a highway in North Carolina, as shown in a viral video.

On Thursday, the Swain County Sheriff’s Department shared incredible footage of the pilot touching down in the middle of traffic on a North Carolina highway. The pilot was able to land the plane “down on its wheels on Highway 19 just west of the T.A. Sandlin Memorial Bridge over the Little Tennessee River,” according to WAVY-TV.

WRIC-TV reported, “Vince Fraser, 31, who has less than 100 hours of flight time, lost power to the engine of his 1967 Aero Commander single-engine plane, and struggled to find a suitable location to set the aircraft down in the dense forests of Swain County, located in the southern Appalachian mountains of North Carolina.”

Fraser ventured on the trip to get an aerial view of a property near Fontana Lake.

“As I started climbing, the aircraft just sort of stopped climbing,” Fraser said. “I had to pitch down more to keep the airspeed.”

“I looked at him and I told him I was sorry, and that I loved him. From there on out, it’s just a commitment,” Fraser told his father-in-law, according to WJW. “Let’s see what’s going to happen. Let’s do this the best we can.”

“Now we’re headed to Highway 19. I see powerlines. I see cars, curves, trees, hills. I have no other option. This is the only and best option for us right now,” Fraser explained.

Fraser’s father-in-law reacted, “He looked at me and said ‘Just do whatever you can. Do what you can do. I trust you.'”

WAVY-TV reported that the pilot reacted to the stalled engine, “Trying to remain calm, he went through a checklist of steps needed to restart the engine in case of a failure. It started.”

Fraser told WINK-TV, “I kind of went into this mentality that I had when I was in the Marine Corps. So, it was just, I had to save Jeff, that’s my objective was to save our lives, and save the people on the ground and with as little damage as possible.”

Then he saw the North Carolina highway with minimal traffic. The novice pilot was able to land the plane near a heavily wooded area in the Great Smoky Mountains, appoximately 55 miles west of Asheville.

Within three minutes, Fraser landed the plane on the highway.

When emergency services showed up at the downed plane, Fraser said, “They pulled up and I just kind of stood in front of the aircraft, took a deep breath and tried to collect myself.”

Fraser noted that his bond with his father-in-law has grown since the near-death experience.

“Now when I give him a hug, I actually embrace him. I don’t know that it’s changed our love for each other but it has definitely made it stronger,” Fraser told Fox 8.

A mechanic discovered that the plane suffered a fuel shortage in one tank.