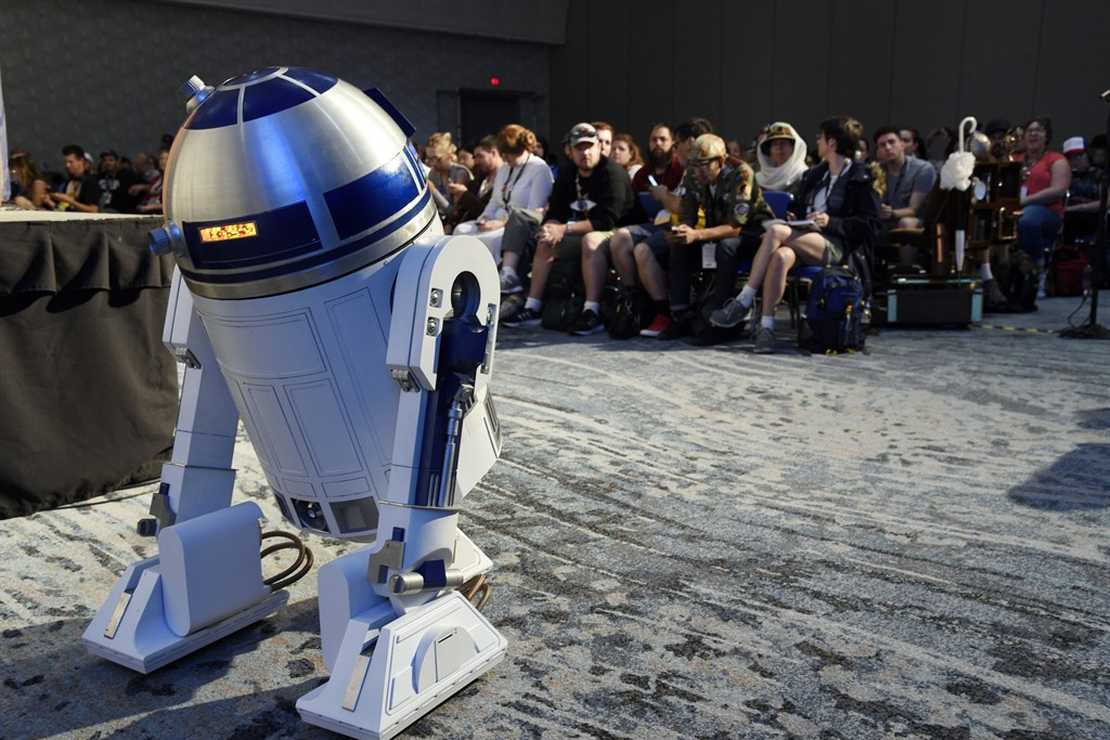 One droid was No droids were harmed in the making of this story:

Florida Man was caught and arrested for impersonating a hotel guest and a Cast Member as he took a gold necklace and an R2-D2 droid worth about $10,000, according to sheriff’s reports detailing the man’s scheme that unfolded across Disney property this year.

He also said he took a game machine called the “Duck Catcher” from the game center on the first floor of the Dolphin Hotel. The game was worth $3,500, according to another sheriff’s report.

Florida Man told a sheriff’s sergeant, “he had an application for Walt Disney World Security pending and was moving the items to show weaknesses in the security of the resorts in the hope of securing a better paying job at WDW.”

He got caught when an actual security officer noticed Florida Man not knowing how to get through security.

You know those security firms that big companies hire to test their physical or cyber security? Management knows that the pretend thieves or hackers are coming because they paid top dollar for them to do just that.

Yeah, Florida Man apparently thought he could freelance doing that into a better paying regular gig.

SCORE: One point each for: Stupid crime, getting caught stupidly, a theme park, chutzpah.

Amazingly, no drugs or alcohol seem to have been involved.

PS: I added “Theme Park” to the list of possible points, mostly ashamed that I hadn’t already.

Florida Man Sure Likes His Coffee

I’m going to skip every single one of the “Would you like [blank] in your coffee” jokes.

A Monday press release from the Osceola County Sheriff’s Office noted that Florida Man was arrested on May 9, but police have now charged the Kissimmee pastor with exposure of sexual organs and released a photo of him to the public.

The sheriff’s office said in the release that Florida Man, who teaches online ministry classes, had previously received a similar charge from an incident that occurred at the same location.

Honestly, I feel like Florida Man had probably suffered enough, even before the police released his photo to go with the story.

Also, I’m thinking he must have missed that “go and sin no more” lesson after the first offense.

I have a hard time getting upset about people who steal from HOAs.

I’m not condoning it, mind you, but if it weren’t for the fact that the money started off as my neighbors’…

Authorities caught suspicion of Florida Woman’s crimes in February when a bank who oversees the HOA management company noticed fraudulent activity. It became clear during their investigation that Fonville had possessed checks with three different HOA’s account information on them, and deposited the checks to her personal bank account. Pinellas County authorities stated that Fonville had used the many to pay for daily living expenses, credit card bills, and Buccaneers tickets.

Bucs season tickets start at $1,770 a pop and that’s for the worst seats in the stadium. Lower level end zone tix will run you $8,283. If you want anything better than that, you’ll have to consult your local scalper.

I know what you’re thinking: Florida Woman should have stolen more money.

Previously on Florida Man Friday: Are Those Mangos In Your Pocket Or Are You Just Happy to Tranny?

Hobo With a Shotgun

This story had me very confused because how does one trespass from a Walmart?

At first I thought it was written by one of those 27-year-olds who know literally nothing, but having looked up the author I decided he can’t be nearly that old.

Apparently, “trespassing” is now what you get charged with when you didn’t steal quite enough to warrant a shoplifting charge. So if you only steal a little, you’re trespassing from Walmart instead of stealing from Walmart.

Look, I know it doesn’t make any sense. But this we’re in the 2020s and nothing has to any longer.

Florida Man, 35, a homeless resident of Palm Bay, was trespassed on June 13 because the value of the attempted theft did not initially warrant a law enforcement response, police said.

An officer was still there, however, who when requesting Florida Man’s identification was told his ID was “outside in his backpack,” according to an affidavit for Horne’s arrest warrant. Horne left the store without incident and without retrieving the backpack, police said.

Walmart employees later noticed the bag and collected it, observing what they told police appeared to be two firearms inside.

Including a sawed-off shotgun with the serial numbers removed.

PS: Thinking of adding “People of Walmart” as a point.

When I talk to spirits, I prefer it to be a single malt scotch, preferably 15 years or older.

And they only rarely talk back:

Deputies said Florida Man was caught on multiple surveillance videos approaching the newly constructed St. Petersburg home around 11:50 a.m. on May 3 while riding a bicycle. He then locked the bike to a nearby stop sign and walked to the home while attempting to cover his face with his shirt, arrest documents stated.

Five minutes later, Florida Man was captured on camera running from the home back to his bicycle before he rode away.

Deputies said he was identified by the potential buyers as one of their employees.

Florida Man told police he wasn’t mad at his boss or anything, he was just doing what the spirits told him to do.

We had five score stories with a total of 18 points for an average of 3.6 points.

Solid effort, Florida Man. Can’t wait to see how you do next time.

According to @9newsdenver investigators tracked Colorado Man down after they noticed an ankle monitor was broadcasting his location during the bank robbery.

He was framed, he swears.