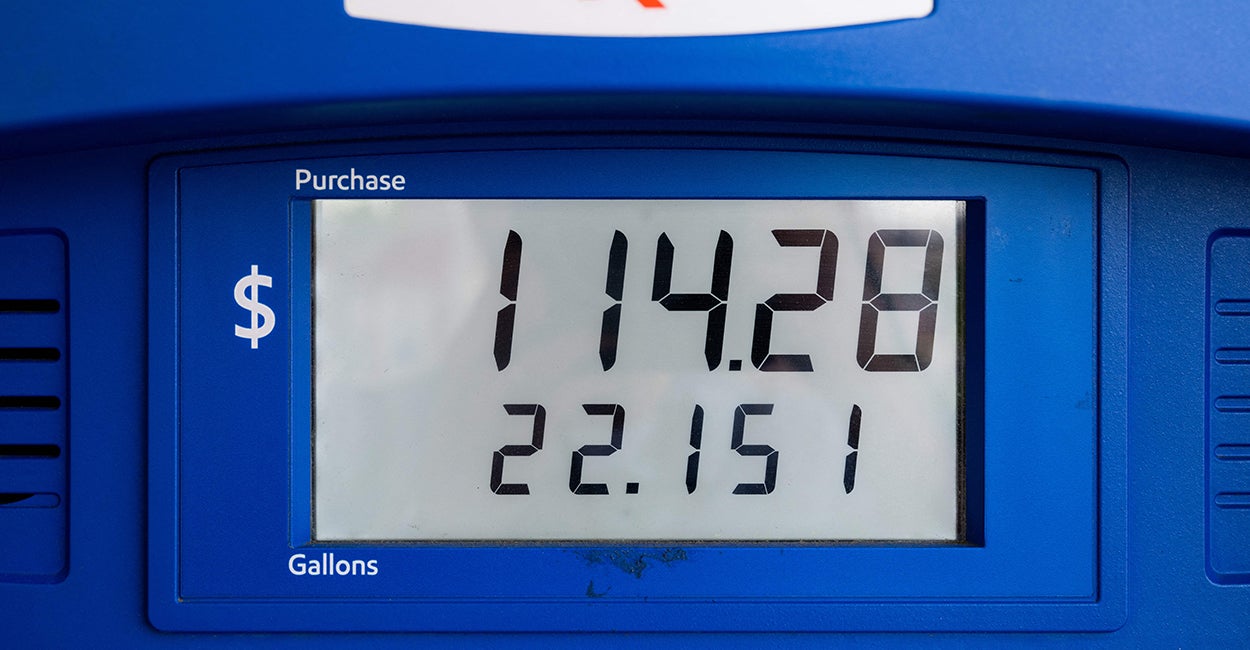 There’s a popular genre of fiction books and TV programs that explore what the world might have been like if history had taken a different twist. What if Julius Caesar never crossed the Rubicon? What if Napoleon won at Waterloo? What if the Allies lost the Great War?

And what might gasoline prices look like today if we didn’t have a president deliberately trying to force Americans off our most abundant, most reliable energy sources?

Counterfactuals like these are just that—fiction. But they can help us see reality a little more clearly.

It was no secret on the campaign trail that Joe Biden wanted to end America’s use of conventional energy such as coal, oil, and natural gas. President Biden’s first executive orders in office deployed a sweeping regulatory agenda throughout the executive branch to that end. This radical agenda has been the consistent message and persistent policy choice of the administration.

The U.S. Energy Information Administration’s Annual Energy Outlook in 2020 gives us a hint of an “alternate history” of what might have been. Every year, the EIA publishes projections for energy production, consumption, and prices in the U.S. Its reference case in 2020 made projections for the next three decades assuming that existing laws and regulations at the time—prior to the Biden policies—remained the same.

Of course, no one knows the future—the Outlook didn’t anticipate a pandemic or the unprecedented way local, state, and federal governments responded to it. Nor did it anticipate a new presidential administration running on an agenda to eliminate fossil fuel use. We must do Biden the courtesy of noting that his energy policies are nothing like President Donald Trump’s.

So, after a record-breaking year of energy production in the U.S. in 2019, what did the EIA expect in the Outlook for 2021 and 2022—that is, the first two years of Biden’s presidency?

Domestic oil production: Again, assuming no policy changes from what Congress and the Trump administration had on the books at the close of 2019, the EIA projected strong production growth of U.S. crude oil and petroleum products, with the United States being a net exporter through 2050. It projected even greater crude oil production and petroleum exports under a scenario where global oil prices were assumed to be high (see Chart 2).

Just like gasoline prices, oil production has not played out the way the EIA anticipated. The pandemic and government responses to it totally changed the situation. As Americans drastically changed their commutes and travel plans, the price of oil plummeted and oil production sharply dropped in March 2020 before showing signs of recovery over the summer.

And then the U.S. had a presidential election where two very different energy policy agendas were competing.

Perhaps the first hint that recovery and reality would be different from one another was after the election when oil and gas companies raced to secure thousands of government permits to drill on federal lands in the waning months of the Trump presidency. They were concerned, with good reason, that Biden would follow through on his campaign promises.

To date, Biden is the only president in modern history not to have held a single oil and gas lease sale on federal lands despite clear direction from Congress to do so quarterly. While the Department of Interior is being forced by court order to hold a lease sale this quarter, it increased fees by 50% and decreased the amount of available acreage for drilling by 80%—even as it cuts fees and red tape for renewable “green” energy production. Timelines to approve permits to drill on already leased land ballooned from the Trump administration’s best average of 108 days in 2019 to 182 days under the Biden administration, and scores of permits are now being held up by litigation initiated by extreme environmental groups allied with the White House.

Offshore, the Biden administration has not completed a single lease sale. In contrast, Trump held eight in his single term and President Barack Obama held 29 lease sales in his two terms.

While energy production on federal lands and waters gives a clearer picture of the administration’s desired policy approach (where it more directly controls resource management policy), the majority of energy production in the U.S. happens on state and private lands.

Normally, as the price of crude oil goes down, oil and gas companies idle drilling rigs, and when the price goes up, they bring those rigs back online. It’s supply and demand communicating through prices. But when Biden entered office with a clear agenda to forcefully transition Americans away from fossil fuels and demonstrated that intent with a regulatory agenda to achieve it, that changed the supply-demand communication. It inserted artificial constraints on oil production despite demand.

For example, U.S. crude oil production in 2021 during Biden’s first year in office was 9% below 2019 levels and, incredibly, even below 2020 levels when the worst of the pandemic shock took place. Where the 2020 Outlook anticipated production of 13.2 million barrels per day in 2021, reality was 11.2 million barrels per day. Preliminary totals for 2022 look to be better than last year but still not on track with pre-pandemic oil production, despite record-high prices. Again, as demand drives prices higher, production and supply should be moving higher to meet the demand.

There were half as many onshore rigs operating per month in 2021 as in 2019, and preliminary data for 2022 shows onshore rig counts are increasing but still lagging behind pre-pandemic levels. Offshore, average rig counts fell drastically in 2020 and have remained flatlined through today (see Chart 3).

Put together, the oil production happening today is due to federal lease sales under Trump and Obama and production being done on private and state lands despite the Biden Administration’s long-term agenda. One has to wonder how prices, supply, and demand might be correcting without the Biden administration’s policy future looming and Biden’s current policies actively working against that correction.

Undoubtedly, government modeling like the Annual Energy Outlook is only as good as the minds who build the model and humans’ inherently limited ability to guess at the future. Without question, major energy producer Russia’s invasion of Ukraine is also factoring into the high prices Americans are paying for gasoline, as is higher summertime demand for gasoline during vacation season.

But to stop there is to totally ignore the policy choices being made by the Biden administration that had already led to significant increases in energy prices before Russia invaded Ukraine.

Asked why oil production in the U.S. had not yet caught up to demand, then-acting EIA Administrator Stephen Nalley explained to the Senate Energy and Natural Resources Committee that American producers were “trying to reposition for the long term.” It was a diplomatic way of stating what the Biden administration has made very clear: that it intends to put the oil industry in America out of business in the long term.

The Biden administration’s rejection of the Keystone XL pipeline was only the most visible of those measures. It also has proposed or finalized regulations that restrict nearly every aspect of the oil industry: financing and private-sector investment, exploration and production, pipeline construction and operation, and consumer use. It’s hard to say how much faster markets could have corrected after the pandemic. However, actively pushing policies to prevent significant new oil production infrastructure from being built can only work against the market self-correcting.

Biden’s persistent pursuit of an anti-fossil fuel agenda is only making a bad situation worse. At times, the administration has even admitted high prices are part of the process. We must give Biden the credit that policies have consequences and reject the administration’s many attempts to shift responsibility for what is the only logical conclusion of policies designed to forcibly wean Americans off fossil fuels: higher prices.

From Counterfactual to Historical Reality

The pattern for Biden’s radical energy policies has long been used by California and Europe, where residents are not considering counterfactual “what if” scenarios but the reality of these policies that have been on the books for years now.

There are reasons why Californians today are paying $6.27 for a gallon of regular gasoline—$1.27 more than the national average—and pay billions more per year than if they were paying the national average price for gasoline. California requires a boutique blend of gasoline to meet its own climate and environmental regulations and heavily regulates the refineries that produce fuel. It is also working to restrict and eventually eliminate oil and gas production in the state and it severely restricts pipelines, forcing the state to rely on expensive, heavily regulated domestic shipping. Its Low Carbon Fuel Standard is designed to penalize conventional gasoline and diesel and subsidize alternative fuels. And it is requiring an increasing number of trucks and all new passenger vehicles sold in the state to be zero-emission vehicles by 2035.

If California’s policies sound vaguely familiar, they should. The Biden administration is working in effect to nationalize California’s energy and climate policies.

Similarly, for well over a decade, Europe has unnecessarily rejected proven technologies like hydraulic fracturing to access cleaner natural gas energy resources; heavily subsidized less efficient, less reliable wind and solar energy technologies; and taxed or eliminated the use of natural gas, coal, oil, and, in some cases, nuclear energy. This is in addition to a regional carbon tax and plans to build out a financial taxonomy system to force banks and other private financing away from fossil fuels and toward green energy.

The combination of decreasing domestic production of useful sources of energy while heavily subsidizing inherently intermittent resources has left Europeans with a costly and fragile energy sector and exposed Europe to greater risk both in energy markets and political independence. Years of such policy left Europe flat-footed without alternatives to Russian energy imports, consequently disrupting global oil markets during the current Russian-Ukrainian War and contributing to the high global prices Americans are paying.

Unfortunately, it is the clear and demonstrated aspiration of too many European politicians and the Biden administration along with them to prevent new infrastructure for oil, gas, and coal production to be built and “locked in” for decades of usefulness. Instead, they prefer to wring out what’s left of existing production and rely on imports while also forcing their economies onto more costly, less reliable green energy alternatives.

But here, Biden is attempting to engage in his own alternative history—a counterfactual scenario that is just as fictional. High gasoline prices are just part of his “incredible transition” away from the fuel that supplies 35% of Americans’ total energy needs and 90% of Americans’ transportation fuel needs.

Despite the onset of renewable energy technologies, global demand for oil and gas hasn’t changed much and doesn’t look like it will in the near future. Rather than the administration’s vendetta against oil, this is an energy asset to be incredibly thankful for, as the alternative has proved to be devastating poverty.

Biden’s radical energy policy is reality defying and based on an anti-fossil fuel fiction that is causing unnecessary hardship and costing Americans dearly.

Twitter Vows to Fight ‘Election Misinformation.’ More Censorship Incoming.
IRS and Allies Downplay 87,000-Person Hiring Binge
Is the Mar-a-Lago Raid a Distraction to Help Democrats in November?
Bill Maher is a wolf in sheep’s clothing. Here’s why.
These 4 videos are PROOF of YouTube’s GLARING political bias