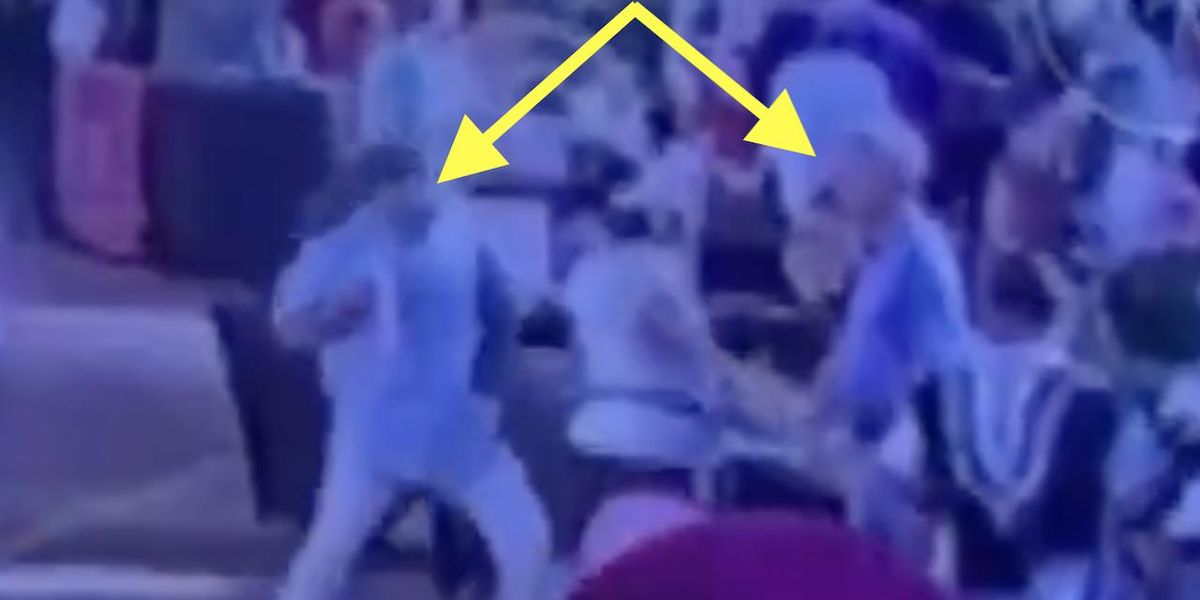 Surveillance video caught the moment Greg Fischer — the Democratic mayor of Louisville, Kentucky — was punched in the face and knocked to the ground at a Juneteenth event Saturday in the city’s downtown area. Police are still looking for the suspect.

u201cPolice in Louisville, Kentucky, are searching for a suspect they believe punched the cityu2019s mayor at a popular downtown event complexnnu201cEarlier this evening, while at Fourth Street Live, Mayor (Greg) Fischer was punched by an individual,u201d the Louisville (1/2)nn#GregFischeru201d

According to WLKY-TV — which characterized the Fourth Street Live! event where Fischer was punched as a “Juneteenth celebration” — police said the blow caught the mayor in the face while he was talking to someone in the crowd.

Video shows the punch knocking Fischer to the ground.

WAVE-TV said an individual who appeared to be part of Fischer’s security team briefly followed the suspect after the punch and then appeared to return to Fischer.

The mayor’s office didn’t address how the suspect got past security and escaped, WLKY added.

“While it’s not appropriate to comment on specifics of that [security] detail, it is always being evaluated and adjusted as needed,” Jessica Wethington, the mayor’s director of communications, told WLKY. “There have been no changes made to the mayor’s events.”

Police are still looking for the suspect, WKLY said, adding that Louisville Metro Police Department released photos of the suspect:

u201cEarlier this evening, while at Fourth Street Live, Mayor Fischer was punched by an individual. The Mayor is doing fine. LMPD is investigating & will release further information as it becomes available. Anyone with information can call our anonymous tip line at 502-574-5673.u201d

Greg Gitschier — a former Secret Service agent and former bodyguard of the mayor — told WHAS-TV that “it’s becoming an upside-down world because lines that were never crossed so much in the past now seem to no longer matter.”

Many commenters unleashed mockery on Louisville police’s Facebook post about the punch, with most of the derision directed toward Fischer, implying that the mayor’s policies led to the physical attack on him.

“Karma. What you allow will continue. You have allowed crime to run unabashed. It will continue,” one commenter wrote.

“Just peacefully protesting, nothing to see here,” another commenter quipped.

In addition, hundreds of officers were caught on video walking out on Fischer when he arrived to address them at an early June 2020 roll call. The officers reportedly didn’t feel supported by the mayor amid violence and looting. In September 2020 the city council declared it had “no confidence” in Fischer.

Other commenters lauded the suspect who punched Fischer, saying the suspect deserves a “medal” for the blow that knocked the mayor off his feet.

“Honestly, it couldn’t have happened to a finer man,” one commenter said of Fischer, while another said “maybe he should have taken care of crime in Louisville.”

Dozens of Democrats back ‘Trans Bill of Rights’ resolution
Biden Takes Aim At America’s Largest Oil Field, Threatening To Stop Production, Sending Gas Prices Soaring
Video captures the moment Texans help 17-year-old girl escape sex trafficker, now the pimp will be in prison for 59 years
Liberal author says white women in America are bad at community activism ‘and everyone knows it but them’ in a viral social media thread
Last year the Biden admin touted a paltry $0.16 decline in July 4 cookout costs — this year the average cost is up more than $10