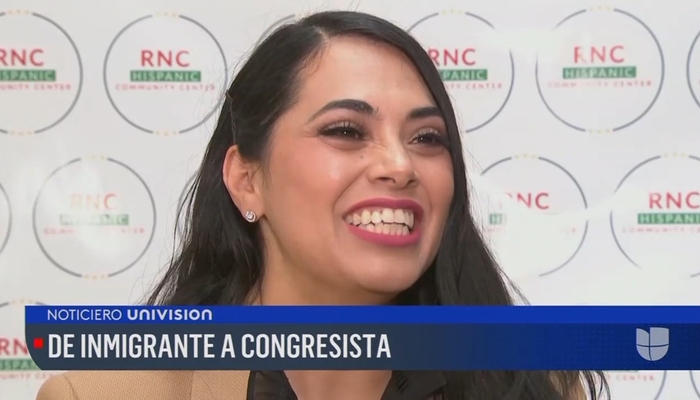 Something remarkable happened the night after Mayra Flores’ historic win in the special election to fill the vacancy in Texas’ 34th Congressional District: a Univision newscast spoke glowingly of the election of a conservative.

Look at anchor Maity Interiano’s introduction of the complete report on Flores’ win, as aired on Univision’s late night newscast:

MAITY INTERIANO: We begin with Republican Mara Flores’ historic electoral victory, who becomes the first U.S. congresswoman to be born in Mexico. Flores will represent Texas after defeating Democrat Dan Sánchez. Her victory symbolizes a political generational shift, and (stands as) confirmation that the American Dream is within reach of any immigrant that strives to achieve it.

Univision’s coverage of Flores’ win didn’t start out this way. Early morning reports on Despierta América were shamefully limited to a 6-second blurb that didn’t mention Flores by name, and were read over B-roll of Nevada Senate candidate Adam Laxalt. It was bad enough that we called it out on social media. Univision, to their credit, took corrective action and included full reports on Flores in both their prime time and late night newscasts.

This report is remarkable in that it is the type of glowing report that one expects to be given exclusively to Democrats (think AOC). In all my time at the MRC, I can’t ever recall this kind of positive -and, yes, glowing- coverage of the election of a Hispanic conservative to the United States Congress- let alone on a network known for referring to them as race-traitors (see Exhibits A and B).

This report is also proof evident of the power and transcendence of Flores’ win. By virtue of her demography, a Congresswoman Flores compels coverage in a way that other Hispanic conservatives do not. Univision and Telemundo simply CANNOT ignore the immigrant from Burgos, Tamaulipas that through hard work and perseverance became the first Mexican-born woman elected to the United States Congress. They are compelled to tell that story, even if it is a story that forcefully decouples leftist politics from the Latino identity they so strongly enforce, because it is an aspirational story that is extremely relevant to their core audience throughout the West and Southwest. “From immigrant to congresswoman”, read one chyron. They might as well have said “she’s one of us”.

A beaming Interiano, who I again remind you is a Univision anchor, closed out the report on the election of a Texas Republican with “Latino pride”. A huge shift is underway.

Click “Expand” to view the full transcript of the aforementioned report as aired on Noticiero Univisión Edición Nocturna on Wednesday, June 15th, 2022:

MAITY INTERIANO: We begin with Republican Mara Flores’ historic electoral victory, who becomes the first U.S. congresswoman to be born in Mexico. Flores will represent Texas after defeating Democrat Dan Sánchez. Her victory symbolizes a political generational shift, and (stands as) confirmation that the American Dream is within reach of any immigrant that strives to achieve it.

MAYRA FLORES: Believe in yourselves, that all things are possible in this country if you work hard. I still don’t believe it because I remember when I worked in the fields with my parents…

MARLENE GUZMÁN: At her 36 years of age, Mayra Flores makes history by becoming the first Mexican congresswoman to achieve a seat in Congress.

FLORES: I am the American Dream, but I don’t just want that dream for myself. I want it for our children.

GUZMÁN: Gaining the majority of votes in Tuesday’s special election, Flores wins in Texas’ 34th District, which covers part of the Rio Grande Valley, where 84% of residents are Hispanic.

FLORES: It means  alot, because this district has never had a voice in Washington. And I believe that it is time that Washington listens to the Hispanic community.

GUZMÁN: This victory in South Texas does not only favor the Republican Party.

GUZMÁN: But it also signals a shift in the political direction of a region dominated by Democrats for over 100 years.

FLORES: Here in the Valley, we’ve had only one party in charge of everything. And that’s not good. It’s good to have balance. And as I said, I believe that it is important to have a voice in both parties, and the Hispanic community has a voice within the Republican Party.

GUZMÁN: The Congresswoman-elect is getting ready to go to Washington shortly and thus officially fulfill the seven months remaining in this term.

GUZMÁN: Upon filling the vacancy left behind by Filemón Veka when he resigned from Congress at the beginning of the year Flores, who was born in Burgos, Tamaulipas, will face Democrat Vicente González in the November 8th election.

GLORES: I also grew up in poverty. However, I had the best childhood. And for me, defending life is the most sacred thing. And we are very different people. But with my work, I will prove that I deserve your vote in November.