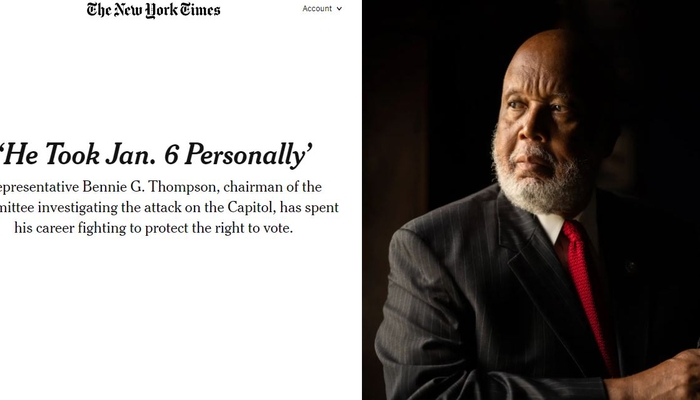 The online headline deck under the Saturday edition story, from Atlanta-based correspondent Richard Fausset and congressional reporter Luke Broadwater, was even more fulsome: “Bennie Thompson Has Spent His Career Protecting Voting Rights” — Representative Bennie G. Thompson, chairman of the committee investigating the attack on the Capitol, has spent his career fighting to protect the right to vote.” 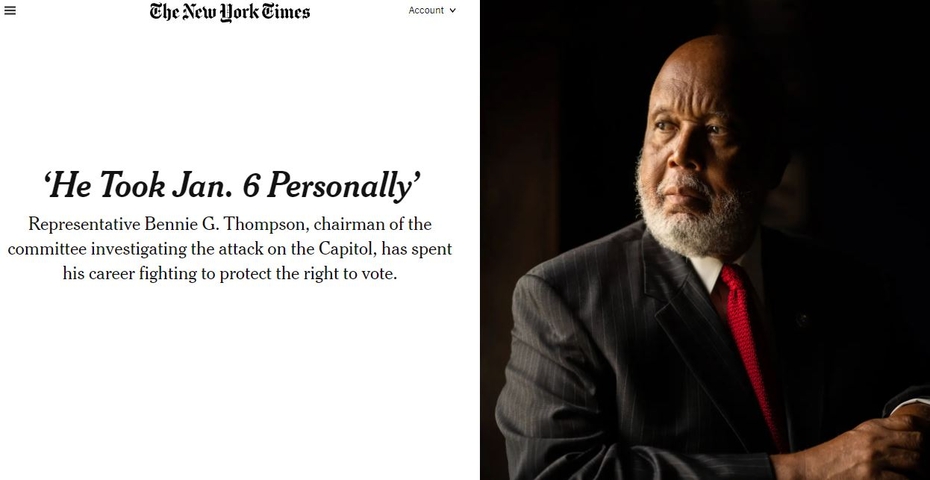 Protecting “the right to vote”….except in the 2004 presidential election. But the Times skipped that bit.

The Times traveled to Thompson’s home town of Bolton, MS, and relayed his admirable early career fighting for civil rights, which apparently has something to do with January 6.

….Thompson accused former President Donald J. Trump of having “spurred a mob of domestic enemies of the Constitution to march down the Capitol and subvert American democracy.”

Mr. Thompson, who is also chair of the House Homeland Security Committee, has spent nearly 30 years on Capitol Hill, but his leadership of the Jan. 6 committee represents his most significant turn in the national spotlight. And it is thematically consistent with a public life that was forged in Mississippi when disenfranchisement was achieved by chicanery, intimidation and violence.

Mr. Thompson and other Democrats surely recognize that a withering critique of Mr. Trump is more powerful coming from a Republican. At the same time, the close alliance that Mr. Thompson appears to have forged with Ms. Cheney has softened his reputation as a fierce partisan reluctant to work with Republicans.

Nothing was said about Thompson smearing Justice Clarence Thomas as an “Uncle Tom.”

The reporters took pride in and made excuses for Thompson’s partisanship, which has previously involved calling Obamacare opponents racist.

In Mississippi, this reluctance [to work with Republicans] is often attributed to the emotional scars Mr. Thompson carries from his years battling for basic civil rights against white Mississippians who migrated to the Republican Party after President Lyndon B. Johnson secured passage of the Voting Rights Act in 1965.

Never mind that a higher ratio of Republicans than Democrats voted for the Voting Rights Act, and that Democrats were opposed to civil rights legislation through the early 1960s.

The paper’s apparent disgust with racial gerrymandering also has its convenient limits, as this passage proved:

A number of “Re-elect Bennie Thompson” signs were scattered around, but they are most likely a formality. Mr. Thompson’s district has been engineered to be safe for a Black Democrat, leaving Mississippi’s other three districts generally safe for Republicans.

Note that for all the Times drivel about “voting rights” in 2020, Thompson himself objected to the presidential results in 2004, when George W. Bush defeated Democrat Sen. John Kerry and earned a second term. He objected to Ohio’s electoral vote slate, out of conspiratorial concerns that the Ohio count, which favored Bush by some 120,000 votes, had been rigged. A win for Kerry in Ohio would have given the Democrat the presidency, so it was no trivial matter.

Even the left-leaning PolitiFact had to grit its teeth, throw in a lot of hand-waving “context,” and admit that the Twitter claim from the House Republican caucus that “Thompson objected to the 2004 election” was “Mostly True.” Thompson was one of 31 House Democrats to object to Ohio’s electoral vote slate on January 6, 2005. But that particular “Jan. 6” won’t live in media infamy.