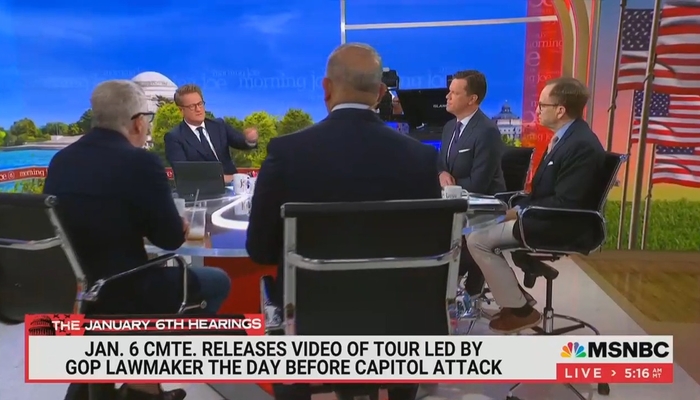 Thursday on MSNBC, the crew at Morning Joe reflected the left’s slow, painstaking acknowledgment of reality that the American people seem poised to reject their apocalyptic view of the world in November. But instead of sobering up, they lashed out at their fellow Americans as ignorant and unconcerned about the future of our Constitution, our federal government, and way of life.

MSNBC’s Donny Deutsch led the circus’ complaints about the election by proclaiming “our democracy is in peril, the craziness going on with Roe v. Wade, guns, we know about the insurrection, versus, this is how much my gas is, how much my bread is.”

He further exclaimed, “I’m concerned and everything in my gut tells me you’d know better about this. Unfortunately, the gas prices and bread is going to be more compelling.”

Notice how Deutsch has stumbled into reality and the fact that they care more about having enough food to eat, gas to drive, and money to keep themselves (and their families) afloat amid a growing mental health crisis, record inflation, substandard schools, and surging gas prices. Those are paramount compared to looking backward to an awful day that a partisan committee has shown incapable of fully investigating.

And of course, main host Joe Scarborough had to say his piece, letting viewers know for the billionth time how he was in Congress and a southern boy at heart, just waving it around like a badge of honor as if he could translate what the peons out in the hinterlands think.

When speaking to CEO and president of the National Urban League, Marc Morial, he talked about how the American people are “pretty damn smart” and will look at the problems affecting them.

When is MSNBC going to finally crack the code? Yes, some people will look at the “crazy” but if they do, they’ll just skim right through it and get right back to figuring out how (and who) will pick up the economic mess.

When talking about the economy, it appeared that Morial was trying to shift the blame away from Biden by saying “it is easy to criticize the people in power because of the economy, but there’s no alternative plan.”

The husband of CBS journalist Michelle Miller, Morial blamed it on the supply chain, and factors outside our borders such as China, Russia and Ukraine. Though it would be easier on him and everyone if he just admitted that Biden too has a lot to do with the economy in America right now.

Morial even took this painful segment to an even more painful and eye-rolling level. He hinted that if the Democrats didn’t do well in the midterm elections, the “normalization of hate” and “violence” would prevail, citing the recent attack against an Idaho pride event. He said he believes Americans will think about that when they go to the voting booth.

Doesn’t he realize that the majority of people in this country are not racist and are, at a minimum, taken aback when so casually labeled as such? Perhaps it’s because they don’t want to be smothered by ideologies they don’t agree with.

This example of leftist logic was proudly sponsored by Dove and Walmart.

DONNY DEUTSCH: The big political issue is going to be come midterms, and even into ’24, what’s more powerful? Our democracy in peril, the craziness going on with Roe v. Wade, guns, we know about the insurrection, versus, this is how much my gas is, how much my bread is –

I’m concerned and everything in my gut tells me you’d know better about this. Unfortunately, the gas prices and bread is going to be more compelling.

It ain’t northwest Florida, and it ain’t New Orleans, but I will tell you, in France, this election, I think, may be instructive. They said Mitterrand– not Mitterrand, I always call him Mitterrand – Macron – he doesn’t really understand—you can tell how old I am I’m in the 70s.

He doesn’t understand how we live, LePen does. That said, she’s too crazy to put in power, and I think it’s that balance the French broke quickly within because they said we can’t trust LePen. That’s what we’re looking at right now.

MORIAL: Number two, it is easy to criticize the people in power because of the economy, but there’s no alternative plan–

MORIAL:  – to address inflation out there except to what?

MORIAL: Produce millions of unemployed Americans and the prospect of stagflation is something that the Fed and fiscal experts and the business community have to be overly concerned about. I remember stagflation.

MORIAL: And it is extremely painful. So, the American people are going to be uncomfortable with the inflation we see, but I would submit to you that one thing that’s different today with this inflation is it’s being significantly produced by factors beyond the borders of the United States.

Ukraine, China, those are having material impacts, the slowdown of the supply chain. So I question whether the Fed has the singular power in its hands by simply raising interest rates to end inflation without producing a severe recession.

So, I’m concerned about that. But I think, Joe, honestly, I think American democracy, the survival and the ability of American democracy to guide this country into the 21st century is going to be the issue people vote on.

We’re seeing the normalization of violence. So, let’s look at January 6. But then look at these 30 guys who were going out to Idaho, I believe it was.

MORIAL:  To attack a pride fest. They had organized themselves. Let’s look at this guy in Buffalo who was charged by the Department of Justice just yesterday. He had organized, he was part of a movement which was about an ideology.

WILLIE GEIST: And they’re emboldened and enabled now by gathering online as well.

Stock futures fall following a major comeback week for stocks
We Know You Want to Run, Hillary… Just Admit It
Fourth of July travel surge puts airlines — and passengers — to the test
How To Sell Your House for the Highest Price Possible
Joy Reid: GOP to ‘Take Ownership’ of Half The Women in US After Roe