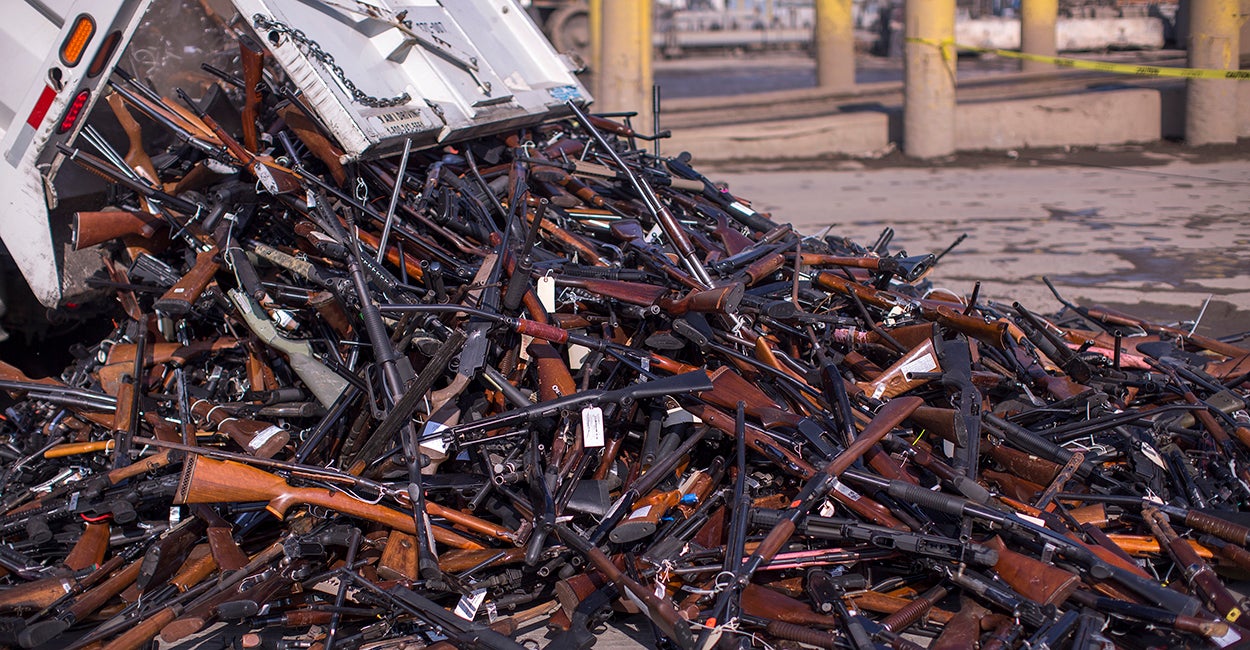 “All political power comes from the barrel of a gun. The Communist Party must command all the guns; that way, no guns can ever be used to command the party.”

The quote was from Mao Zedong, founder of Communist China. Mao’s first act after gaining complete control of China in 1949 was to take away all guns from the population. It was a policy he began in 1935 as he took over each rural province. Anyone found with a gun post-confiscation was executed.

An estimated 65 million Chinese died as a result of Mao’s repeated, merciless attempts to create a new “socialist” China. Anyone who got in his way was done away with—by execution, imprisonment, or forced famine.

Mao killed more people than either Stalin or Hitler during World War II. And it all began after he took away the guns.

Dictators throughout much of history have disarmed their populations before they began their mass killings. Examples abound beyond Mao: Hitler took guns from the Jews in November of 1938, and Kristallnacht and the Holocaust followed; and then there was Fidel Castro in Cuba and Hugo Chavez in Venezuela, to name but a few.

Everybody ought to have a gun, Fidel Castro maintained—until he took over Cuba in 1959. At a rally in Havana before he assumed power, he explained: “This is how democracy works: it gives rifles to farmers, to students, to women, to Negroes, to the poor, and to every citizen who is ready to defend a just cause.”

Weapons ranging from Czech submachine guns to Belgian FN automatic rifles were handed out to 50,000 soldiers, 400,000 militiamen, 100,000 members of the factory-guarding popular defense force, and to many men, women, and children in Cuba’s 1 million-strong “neighborhood vigilance committees.”

Immediately after assuming power in 1959, Castro changed his position, following Mao’s rule that guns should not be in the hands of the people.

For three weeks after the Castro government was formed, Radio Havana warned, “All citizens must turn in their combat weapons. Civilians must take arms to police stations, soldiers to military headquarters.”

Radio Havana’s explanation was somewhat contradictory: the guns were in bad shape anyway and the “struggle against our enemies requires a rigorous control of all combat weapons.”

There was an urgency about the new policy that suggested serious concern. Failure to turn in military weapons by Sept. 1, 1959, warned Radio Havana, would be punished not by criminal courts but by the dreaded Revolutionary Tribunals—those kangaroo courts that sentenced thousands of Cubans to death after Castro took over.

Venezuela is now paying the price for allowing Hugo Chavez to implement the Mao rule when he came to power in 2012.

The shocking nature of an economic collapse that led Venezuela from being one of the richest countries in Latin America to one of the poorest has been well documented.

One aspect of the Venezuelan crisis that does not receive much coverage is the country’s gun control regime. All guns were outlawed when Chavez came to power, and harsh penalties were imposed on violators. The Venezuelan Armed Forces have exclusive power to control, register, and potentially confiscate firearms.

Many citizens now regret the repressive gun control legislation the Venezuelan government implemented in 2012. Naturally, this regret is warranted. The Venezuelan government is among the most tyrannical in the world, with a proven track record of violating basic civil liberties such as free speech, debasing its national currency, confiscating private property, and creating economic controls that destroy the country’s productivity.

Elections have proven to be useless, as they’ve been mired with corruption and charges of government tampering. For many, taking up arms is the only option left for the country to shake off its tyrannical government. But the Venezuelan government has prevented such an uprising with its draconian gun control.

These life-and-death lessons of history are lost on too many Americans. Our Founding Fathers didn’t give us the Second Amendment for duck hunting or simply for self-protection in a country that at the time had a vast and yet unknown frontier. They bestowed it upon us so that we could protect our precious nation from devolving into tyranny as so many others have done.

Politicians who respect the American ideal don’t try to diminish the Second Amendment or blame it for other ills of society that they have failed to solve, but rather embrace it as part of the legacy of rights that helps keep America free.

The Push for Permanent Vote-by-Mail
Is COVID Now a Pandemic of the Vaccinated?
‘They’re all terrified’: Patients ‘panic’ as abortion clinic prepares to close
Massive Recall Announced, Normal Home Item Has Been Spontaneously Bursting Into Flames
The Red-State Badge of Courage