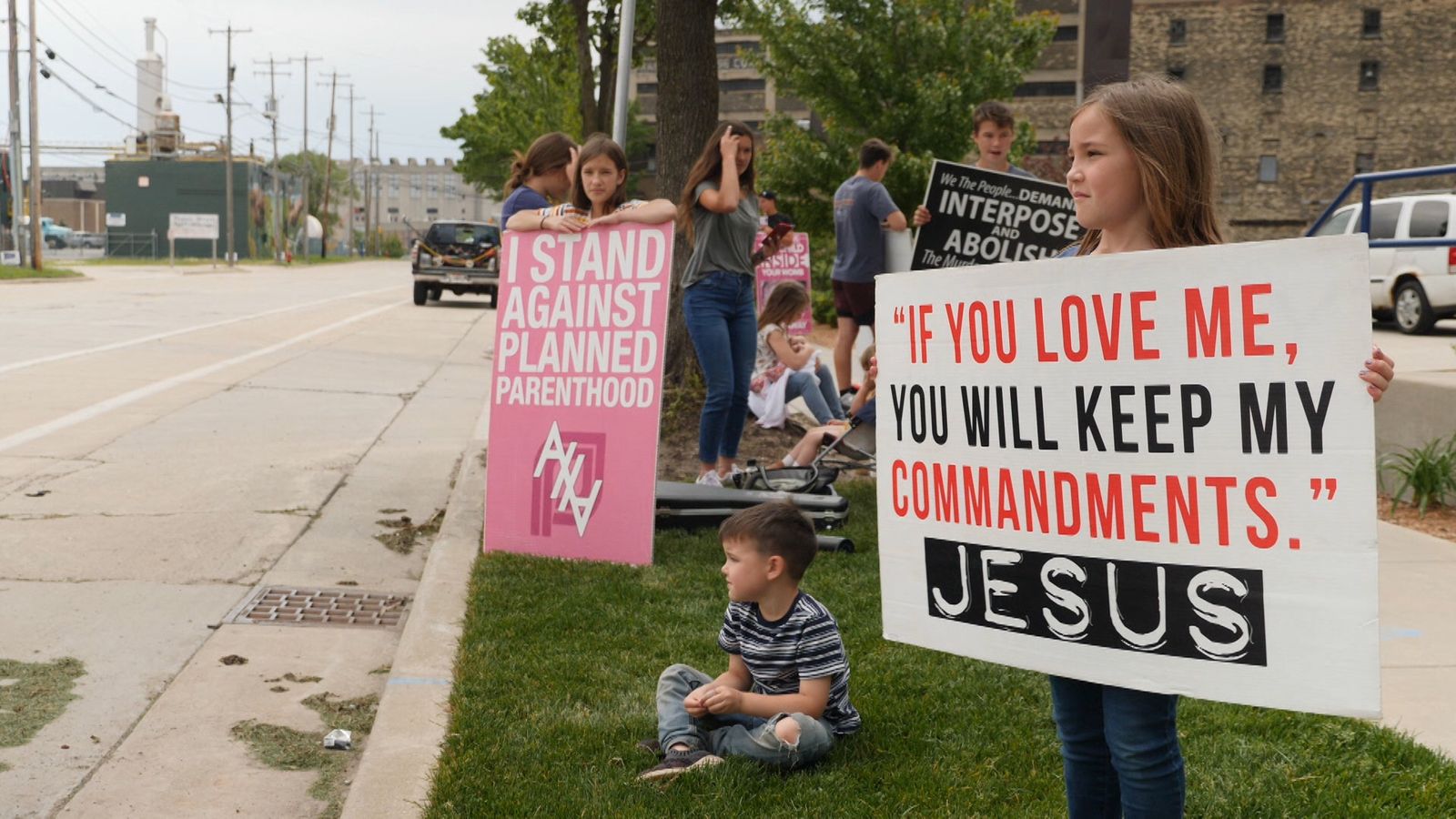 Jason Storms, his wife Sara and their 10 children are spending the day together in Milwaukee, Wisconsin.

Three-year-old Charlotte is pushing five-month-old Hazel around in a doll’s pram while one of their boys is scrolling on a smartphone.

It could be any happy family on a sunny afternoon. But the Storms tribe are not at the park.

They are on the pavement outside a Planned Parenthood abortion clinic and every time someone drives into the car park, they spring into action.

The older children approach women going to appointments, handing them leaflets and telling them they “don’t have to go through” with it.

One holds a sign reading “We will adopt your baby”, another reads “Babies are murdered here”.

America is engaged in a bitter battle over the right to choose abortion and this is the frontline.

Any day now, the Supreme Court is expected to issue a decision which would represent a seismic shift in life and law in America.

At least five of the nine Justices are likely to vote to overturn Roe v Wade, the name given to a historic ruling which legalised abortion nationwide in 1973, up to the point of foetal viability.

If they do, it would reverse half a century of legal precedent and hand the power to the 50 states to independently decide on the right to choose abortion.

Around half the states are expected to ban abortion entirely or impose severe restrictions.

Even among pro-life, or anti-abortion, activists, Mr Storms’ views are extremely conservative.

Babies have ‘value from the moment they come into existence’

He is the leader of Operation Save America, an evangelical group which opposes same-sex marriage, the morning-after pill and abortion from the moment of fertilisation.

“I think our laws should be clear that little human beings are made in the image of God. They have value from the moment they come into existence,” he said.

In America, abortion was traditionally opposed on religious grounds, but it has been hijacked over the past half-century by politicians to bring people to the polling booths, and groups like Operation Save America hold increasing sway with right-wing lawmakers.

Mr Storms denies he is being misogynistic by turning up outside abortion clinics to encourage women to change a decision they may well have thought long and hard about.

“Whether you’re a man or woman, we should defend each other’s right to life.

His 18-year-old daughter Julia sees abortion in similar terms and believes it should be outlawed even when conception has resulted from rape or incest.

“I like to say two wrongs don’t make a right,” she said.

“And that child is just as much of a victim as the mother is, they didn’t choose to be in that position. The child doesn’t have any less value than a child who is conceived consensually.”

A local pastor, Reverend Jonah Overton, turned up outside the Planned Parenthood clinic to begin a counter-protest.

Rev Overton is worried about the right to choose abortion, as protected by the constitution, being stripped away.

“It means a world in which rights and access to healthcare are selective based on where you live and the whims of your state legislature,” they said,

“I’m very worried about what will happen, especially to poor and black and brown women who don’t have access to other options in a way that, for example, wealthy white women always will in this country.”

Mr Storms and Rev Overton are America in a microcosm, divided over an issue which has come to define a country so often split in two and, with such a monumental decision expected in the coming days, that divide will only deepen.

Read more:
What is Roe v Wade?
Activists chant ‘do something Democrats’ as they protest outside US Supreme Court over leaked draft ruling
Mississippi case will have ripple effect across the US
New law forces Texan women to travel outside state for abortions