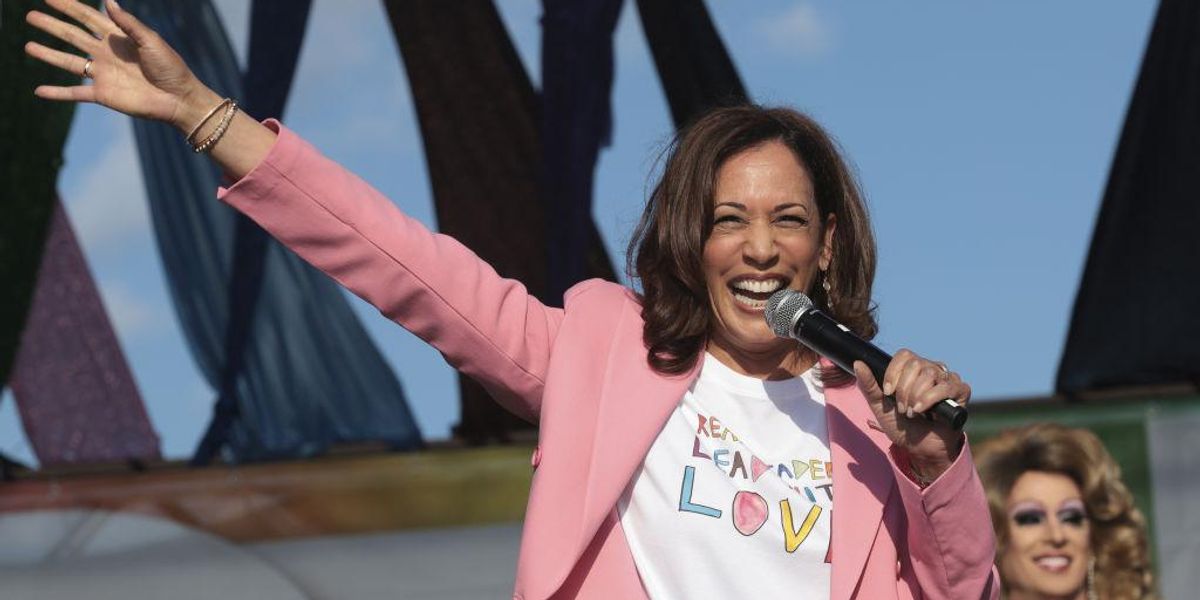 Vice President Kamala Harris made a surprise appearance at the Washington D.C. Capital Pride Festival Sunday, where children were exposed various forms of extremely sexually suggestive LGBTQ+ “kink,” with the gleeful participation of their parents.

“No one should fear loving who they love,” Harris said in remarks that took aim at Republican-led states that have passed laws keeping sexually explicit content out of classrooms or prohibiting minors from undergoing sex-change procedures or hormone regimens. “Our children in Texas and Florida should not fear who they are.”

“We should not have to be dealing with 300 laws in states around our country that are attacking our LGBTQ+ brothers and sisters,” Harris added. “So we know what we stand for, and therefore we know what we will fight for.”

u201cVice Pres. Kamala Harris makes remarks at Capital Pride Festival in D.C.: “No one should be made to fight alone.” https://t.co/d8mQF7kGp1u201d

The vice president appeared to be referring to an executive order from Texas Gov. Greg Abbott (R) that directed the state’s Department of Family and Protective Services to investigate “sex-change” procedures or hormone regimens for gender dysphoric children as child abuse.

As for Florida, Republican Gov. Ron DeSantis signed the Parental Rights in Education Act, a popular law that prohibits classroom discussion of sexual orientation or gender identity in K-3 schools, reserving sex education for what is developmentally or age-appropriate in later grades as determined by state standards.

Democrats and LGBTQ+ activists have maligned these policies as harmful for transgender youth and bigoted. Republicans say they are necessary protections for children against irreversible changes to their bodies, in the case of so-called gender-affirming care, or “grooming” of kids by adults who expose them to sexually explicit material.

The D.C. pride parade where Harris spoke Sunday featured an overwhelming display of sexual fetishism. Children were encouraged to watch and even participate as thousands of barely clothed individuals marched, “twerked,” and flaunted their sexuality in front of them.

u201cD.C. Pride- A marcher takes a moment to twerk for the crowd before a large group of rainbow-clad children march past.u201d

In one video posted to social media, what appears to be a man with breasts, clothed in nothing but a bikini bottom, bent over and shook his rear at a police officer while the crowd, including children, cheered.

u201cWelcome to D.C. Pride: nnA man with breasts twerks naked in front of a police officer as children March behind.u201d

Representatives from District of Columbia Public Schools participated in the festival, and in another video a banner for Ross DCPS, an elementary school, can be seen in the parade.

u201cD.C. Pride- Hundreds of children marched in the D.C. pride parade today. nnQuite a bit of underage twerking during school performances as well.u201d

Meanwhile, members of D.C.’s “Puppy Play” community dressed in black leather and sported harnesses, ball gags, and other fetish wear as they marched in full view of the families that attended.

u201cThe u201cPuppy Playu201d community walks in the D.C. Pride March as a theybie watches on. nnMultiple children in attendance both marching and watching this year.u201d

These and other lewd displays are typical of pride marches nationwide. LGBTQ+ activists have debated for decades whether sexually indecent marchers should be allowed in pride parades, with some arguing kink harms the movement’s respectability while others assert that sexual fetishes need to be out and in the open to win mainstream acceptance.

For the latter reason, some of the marchers explained why it was important that children participate in the festival.

“It is a great thing because, I feel like, making sure that children are aware of what is around them is important,” one man in a leopard suit told an independent journalist. “Just because you are around certain things doesn’t mean that you’re going to be persuaded to be a part of things, but you should be aware of the other type of people live are around you. And if you’re not capable it’s a developmental problem and this is how we fix that problem.”

u201cPride March D.C. – Attendees explain why it’s a good thing that kids are participating in this year’s march:u201d

He added that kids should be exposed to nudity because “it helps you to understand who you are.”

Other marchers described how they began to identify as gay or queer at young ages.

“It was around 10 that I started questioning if I was bi. Since then it was a slippery slope – am I bi, omni, lesbian? Now recently I’m like, am I pan? Now I’m starting to realize I’m queer,” a woman that uses “he/him” pronouns said to an interviewer.

u201c”It was around 10 that I started questioning if I was bi. Since then it was a slippery slope – am I bi, omni, lesbian? Now recently I’m like, am I pan? Now I’m starting to realize I’m queer”nnPray for the next generation.u201d

Some even expressed confusion with their own identity. And they were the adults.