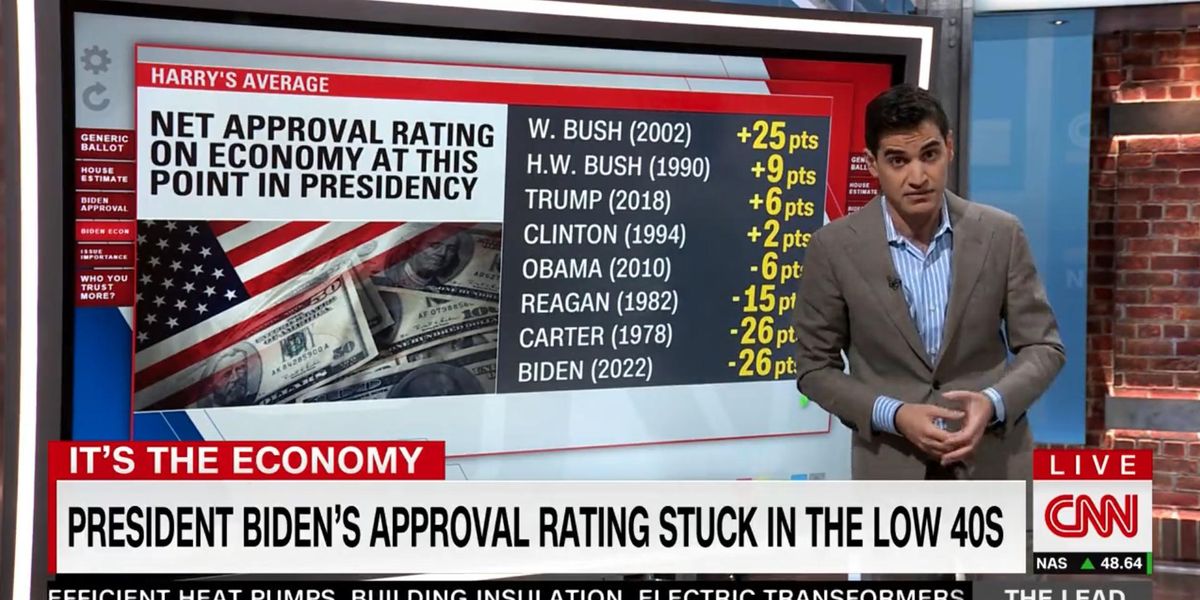 CNN senior data reporter Harry Enten broke down in devastating terms Monday the grim circumstances in which Democrats find themselves just months from the 2022 midterm elections.

Enten told CNN anchor Jake Tapper that, from a historical perspective, Republicans are sitting in a “very good” position to win the House majority in November — and do so in staggering fashion.

According to Enten, Republicans hold a two-point lead over Democrats on the generic congressional ballot, which he called the “best position for Republicans at this point in any midterm cycle in over 80 years.”

The result, Enten predicted, is that Republicans could have up to a 50-seat majority over Democrats in the next Congress.

“My estimate for the 2023 House makeup if the election were held today — which again, it isn’t, we still have five months, five months from tomorrow — would be Republicans 236 seats to 241 seats, Democrats 194 to 199,” Enten explained. “That’s based off of a formula of seat to seat race ratings from both the Cook Political Report and inside elections.”

Tapper described such a result as a “stomping,” a characterization with which Enten agreed.

u201cu201cRepublicans lead on the issue thatu2019s most important. No wonder they have a historic advantage on the generic congressional ballot.u201d @ForecasterEnten reports on the grim outlook for Democrats in Novemberu201d

Enten also agreed with Tapper that “a lot of the Democrats’ problems” are linked to President Joe Biden “who is severely underwater.”

After observing that midterm election results are closely linked to presidential approval, Enten explained the real problem for Democrats: Biden’s approval on the economy is -26%, the lowest since Jimmy Carter in the late 1970s.

Biden’s embarrassing marks on the economy are thus the “big drag” for Democrats because Americans overwhelmingly are concerned about the economy, especially in a year of sky-high inflation and record-high gas prices.

“Here, I think is the big takeaway,” Enten explained. “Views on the economy are closer to…Republican Party 51%, Democratic Party 31%. Republicans lead on the issue that’s most important. No wonder they have a historic advantage on the generic congressional ballot.”

Is COVID Now a Pandemic of the Vaccinated?
Democrats Call for Expanding Supreme Court After String of Losses
NASA begins return to the moon with low-cost CAPSTONE mission, launched by Rocket Lab
Video mashup shows ‘The View’s’ Whoopi Goldberg losing her mind in epic showdown with herself
The Inconvenient Truth About COVID-19 Relief Scandals