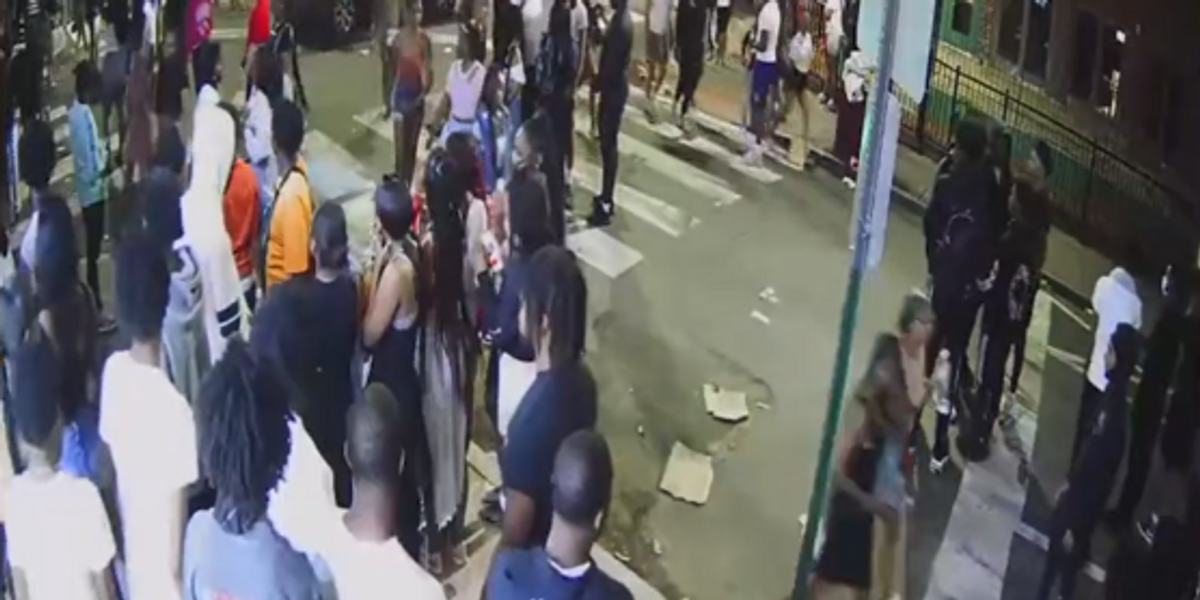 There was a mass shooting in Philadelphia on Saturday night that left three people dead and 11 wounded. More people could have been shot if not for a fast-acting cop that engaged one of the multiple shooters.

Huge crowds gathered at Philly’s popular South Street area filled with restaurants, bars, and shops. However, the party-like atmosphere instantly turned into chaos as gunshots rang out in the entertainment area shortly before midnight.

“There were hundreds of individuals just enjoying South Street, as they do every single weekend, when the shooting broke out,” Philadelphia Police Inspector D.F. Pace told reporters.

Surveillance camera video shows the moment that gunfire erupts and causes the crowd to run for their lives.

u201cSurveillance video from a local business shows pandemonium after shots ring out near South & 3rd streets in Philadelphia last night just before midnight.u201d

u201cIn this screenshot from another angle of the surveillance footage Fox 29 obtained, you can see where the red circle is someone returning fire after shots initially fired into the crowd from opposite direction. At least two shots returned.u201d

“I want to emphasize that South Street is manned by numerous police officers,” Pace added. “This is standard deployment for Friday and Saturday night – weekends – and especially during the summer months.”

According to Pace, one of those police officers was “within 10 to 15 yards of the shooter” and witnessed the gunman shoot into the crowd. The cop fired at the shooter three times, which caused the gunman to drop their firearm and flee the crime scene.

u201c#BreakingNews UPDATE from @NBCPhiladelphia on #Philly Shooting on South Street @PhillyPolice say officers on patrol saw several u201cactive shootersu201d firing into crowd, 14 people were shot, 3 of them are deadu2026No word on motiveu2026 An officer fired at one of shooters – take a listen:u201d

Law enforcement officials say that there were “several active shooters.”

Jefferson Hospital’s trauma center reportedly became so overwhelmed with gunshot victims that it had to turn away people.

u201cSOUTH STREET MASS SHOOTINGn- 3 people are dead, 2 men and a womann- At least 11 more were shotn- 7 victims were taken to Jefferson Hospital n- Police shot at one of the gunmen, that person ran away. Itu2019s unknown if they were shot n@6abcu201d

Witness Joe Smith told the Philadelphia Inquirer, “Once it started I didn’t think it was going to stop. There was guttural screaming. I just heard screams.”

Witness Eric Walsh said, “It was chaos. People were coming off the street with blood splatters on white sneakers and skinned knees and skinned elbows. We literally just were balling up napkins and wetting them and handing them to people.”

Police recovered two guns at the crime scene – one of which had an extended magazine.

Around 11 p.m., there was a shooting a few blocks away – where police found 13 bullet casings, according to WCAU. Police are attempting to determine if the two shootings are connected.

There were no arrests by Sunday morning, and police are still searching for the gunmen.

As of Saturday, there were 211 homicides in Philadelphia this year, according to the Philadelphia Police Department. The number of homicides is down 6% percent from last year, which was the deadliest in the history of the city.

u201cSaturday night in Philadelphia. A mass shooting on 4th & South Street with reports of nearly a dozen people shot. Iu2019m on scene where police have cordoned off the popular weekend strip, a trail of what appears to be blood snaking along the sidewalk in front of a Ritau2019s Water Ice.u201d