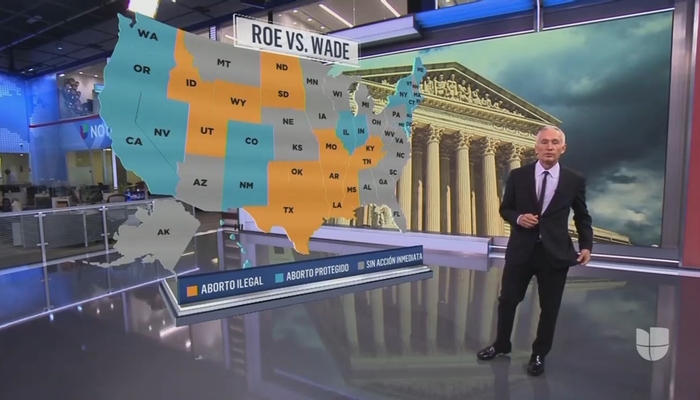 Univision News persists in pushing their pro-abortion activism onto their audiences. The most recent example turned up at the network website’s ‘Republican Party’ landing page, and is not-so-subtly titled “These Are the Plans of Abortion Opponents if the Supreme Court Overturns Roe vs. Wade.”

The blog, based on “possibles” and published on May 22, was accompanied by a news clip featuring anchor Jorge Ramos and correspondent Luis Megid, where the latter insisted: “In poll after poll, the majority of Americans, the majority of Hispanics, believe that women should have the right to get an abortion.” Polls, that is, conducted by pro-abortion activists and liberal media mouthpieces like ABC News and The Washington Post:

JORGE RAMOS: If the Supreme Court does indeed overturn Roe v. Wade, then it would leave it to the states to decide whether or not to approve abortion. In liberal states represented here in blue like California, for example, the practice would be protected, but in conservative states in orange, like Texas, abortion would be illegal and there would probably be no immediate impact on other states that have not yet made a decision about it. On the subject, Luis Mejid has more on the possible consequences.

LUIS MEGID: The news sounded like a legal earthquake, further fracturing a divided country, now separated by states where abortion will remain legal and those where it will be limited or prohibited.

So, what, per Univision, are the grave consequences of overturning Roe according to The Washington Post and sources such as “an abortion advocate with knowledge of the discussions and who spoke on condition of anonymity with the newspaper?”

1. A national veto on abortion

Rather than a national veto on abortion, settling the Dobbs case in favor of overturning Roe vs. Wade will end federalized mandates and shift the decision on abortion laws to elected state governments.

2. An avalanche of state laws on abortion

Again, Univision offers the views of the progressive Guttmacher Institute, “an independent organization that supports women’s right to decide about their motherhood” that insists that… “if Roe v. Wade is eventually overturned or weakened, 22 states will pass legislation to ban abortion as soon as possible.”

Excluded from both Univision.com and Univision News: the fact that canceling Roe vs. Wade means that millions of HISPANIC lives will be saved, including in states like Texas, where according to Univision reports, most of the babies killed by abortion are Latino.

3. Restrictions on travel to another state

Univision, of course, will go to any length to sow fear and demonize pro-lifers like “Republican Senator Marco Rubio (who) is proposing a law that would prohibit employers from deducting expenses related to their employees’ trips to abortions and medical treatment for trans children.”

4. Beyond abortion, other reproductive rights

Again, the Univision fear inducing tactics include stating that the health of women will be threatened by leaving abortion laws to individual states. How life translates into “restrictions on women’s reproductive rights” begs explaining. What it does promote is that women make better-informed choices regarding their reproductive rights, their own bodies, and the miracle of life at conception.

If bias in the Spanish-speaking media like the one mentioned above worries you, feel free to join the MRC in our mission to fight against it. Follow this link and take action today.