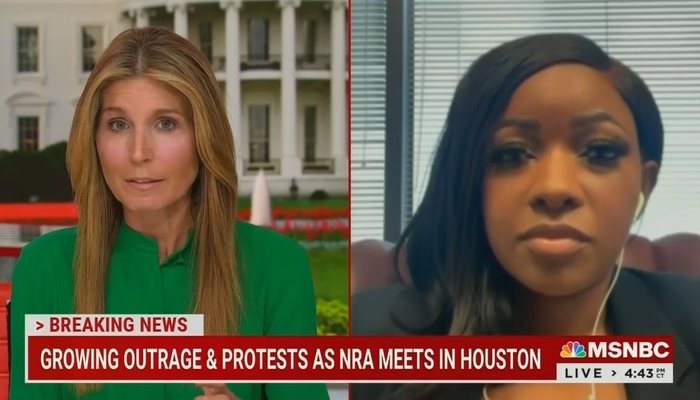 Pam Key at Breitbart reported that on Friday’s Deadline: White House, MSNBC host Nicolle Wallace colorfully insulted the gun-rights crowd as “swathed in frothy delusion that someone is coming to take their guns.”

She was discussing the National Rifle Association convention in Houston, with NBC reporter Shaquille Brewster, who was standing outside the venue near anti-NRA protesters. He said:

BREWSTER: You are having those verbal confrontations. I haven’t seen anything physical. It’s just the verbal confrontations. You get the passion. You get the tension. That’s because both sides, people on both sides see this as an essential issue. They see this as a matter of life and death. I’ve been talking to some of the convention goers. Their heart breaks with what you saw with the school shooting this week, but they feel that the Second Amendment and their protections are what are more important. They fear that any progress that they do if they give up on increase in the age to purchase a weapon, for example, they fear that will turn into something worse, a full-on confiscation. that’s what you heard from the passion on both sides.”

Wallace replied “One is passion. The other is delusion, but I know that is the view.” 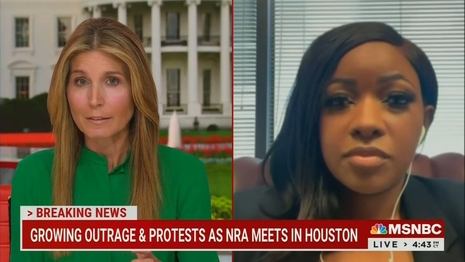 After thanking Brewster for his report from the scene, Wallace launched into a broadside: “If you think a background check will keep you from your AR-15, you clearly shouldn’t have one. If you think waiting until you are 21 is going to keep you from your AR-15, it’s just nonsensical. One side is the table with the most reasonable policy proposals that are, frankly, quite modest, maybe too modest, but they have the support of 85% of the public behind them. The other is swathed in frothy delusion that someone is coming to take their guns.”

Wallace wasn’t going to recall that Texas’s own Beto O’Rourke (whom she gushes over) promised in a 2019 presidential debate to wild applause “Hell yes, we’re going to take your AR-15, your AK-47. We’re not going to allow it to be used against our fellow Americans anymore.”

Nicolle’s oration was brought to you in part by Wayfair.

Outspoken leftist Chelsea Handler declares that ‘Restricting guns’ and ‘Fighting climate change’ are pro-life positions
President Biden previously said abortion is ‘always a tragedy’ and not a ‘right’ in resurfaced clip
Last year the Biden admin touted a paltry $0.16 decline in July 4 cookout costs — this year the average cost is up more than $10
Watch: Dallas protesters make ‘compelling’ case for abortion with furious TWERKING
PolitiFact Leaps to Claim Biden Is ‘Mostly True’ That America Is Now an Abortion ‘Outlier’