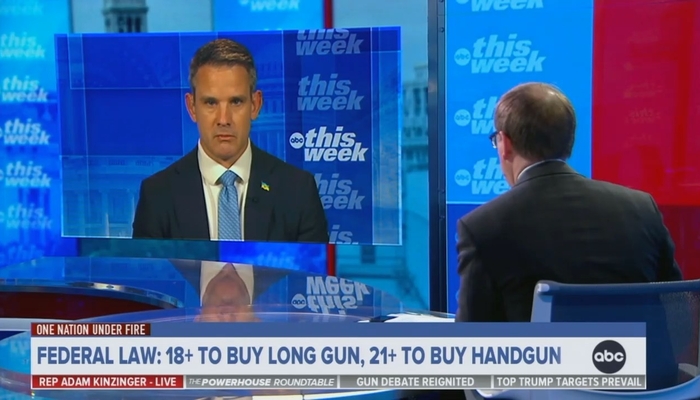 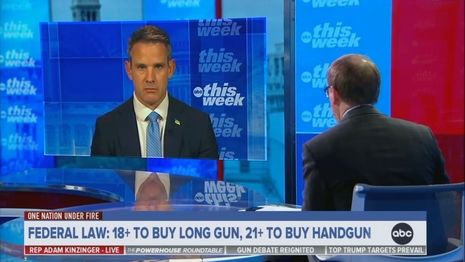 On Sunday’s This Week on ABC, co-anchor Jonathan Karl hosted the first episode since the tragic mass shooting in Uvalde, Texas, and predictably Karl used it to push his party’s gun grabbing agenda. Laughably, the only Republican guest he had during the main portion of the show was liberal Republican Congressman Adam Kinzinger. Kinzinger’s job as per usual wasn’t to defend his party, but to trash it and praise the Democrats, most notably Senator Chris Murphy (D-CT).

During the opening preview of the show, Karl set the tone for the program by sneering at Republicans in Congress “After decades of doing nothing, will Congress finally act?”

ABC’s Jon Karl sneers at GOP on gun control: “After decades of doing nothing, will Congress finally act?” pic.twitter.com/EgVAN1MWQ4

Karl’s first guest was Senator Murphy who continued to tout the reportedly bipartisan talks over gun control and both Karl and Murphy seemed hopeful that some form of gun control or “red flag” laws will pass.

After a commercial break, Karl brought on Kinzinger to ask him about his “journey” from having an A rating from the National Rifle Association (NRA) to having an F rating: “Let me ask you about your journey on this, because you — you were once an A-rating from the NRA” Karl asked.

Karl asked in amazement “So, help me understand, how did you go from being somebody that was kind of right in line with the gun lobby on this to somebody who thinks it time to change these laws?”

Kinzinger responded that it was because he was “getting sick of seeing the mass shootings” as if people who don’t support gun control are happy to see their fellow Americans die in mass shootings.

After telling the story about the time he “called for banning bump stocks which by the way was ultimately done and because of that the NRA basically said, Kinzinger is a RINO” he started crying about the Gun Owners of America and slimed them as being crazier than the NRA.

Then Karl jumped in and agreed, claiming “they’re out right in support of militia movements in the country.”

This is what ABC thinks is a balanced debate on gun control. A liberal Democrat and a liberal Republican who both support taking away your guns.

This segment was brought to you by Fischer Investments. Their information is linked.

JON KARL: But let me ask you about your journey on this, because you — you were once an A-rating from the NRA, you owned an AR-15. Do you still own an AR-15?

ADAM KINZINGER: I do, yep.

KARL: So, help me understand, how did you go from being somebody that was kind of right in line with the gun lobby on this to somebody who thinks it time to change these laws?

KINZINGER: Look, it’s a journey of, you know, getting sick of seeing the mass shootings, you know being a strong–look, I’m a strong defender of the Second Amendment. And one of the things I believe that for some reason is a very rare thing is that as a person that appreciates and believes in the Second Amendment we have to be the ones putting forward reasonable solutions to gun violence. You know, the reaction of my colleagues of the NRA, to say if you want to come and take my guns, so I’m to walk around, I’m going to go into the Michigan state capitol with my AR, by the way can I make a point that open carry, especially with ARs is one of the more insane things.

Maybe out west it works fine, I’m not going to go after it there but to walk into the state capitol of Michigan with a gun because it makes you feel tough, these are the kinds of things that Second Amendment supporters are doing no favors to defend that Second Amendment to the next generation. So for me I woke up the morning after Vegas, the Vegas shooting, I had shot a bump stock before, I heard the audio from the shooting, I knew that was a bump stock and I called for banning bump stocks which by the way was ultimately done and because of that the NRA basically said, Kinzinger is a RINO, or whatever their language was, and I realized especially then, the only thing the NRA cares about is raising money on your back. They don’t really give a lot of money to people. They can get people upset, and they’re competing with another group called Gun Owners of America. You think the NRA is crazy, look at the Gun Owners of America, they think there should be zero restrictions on owning guns. Now, the NRA has to compete with this group for crazy because that’s where they get their money from. The NRA has become, it’s gone from defending rights of gun owners, it’s become a grifting scam, and all you have to do is look at the last few years of the grifting scam of the NRA to know that’s true.

KARL: The Gun Owners of America, I remember covering them after the Oklahoma City bombing. They’re out right in support of militia movements in the country. But the NRA itself is, you know — has huge issues with its budget, internal scandals, is not the force it once was, but does seem the issue still seems to have a hold on Republicans as much as ever now.

Republican Sen. Kevin Cramer gets tip of pinky finger stitched back on after injury, but faces risk of infection and possible need for amputation
Maher Lashes Out at Abortion Ruling, Credits Conservatives for Victory
The retail industry is facing a potential wave of bankruptcies – here’s why
Pro-Abortion Rioters Vandalize Fox News Studios In New York
Stars Janelle Monae and Taraji Henson hit out at Supreme Court during BET awards