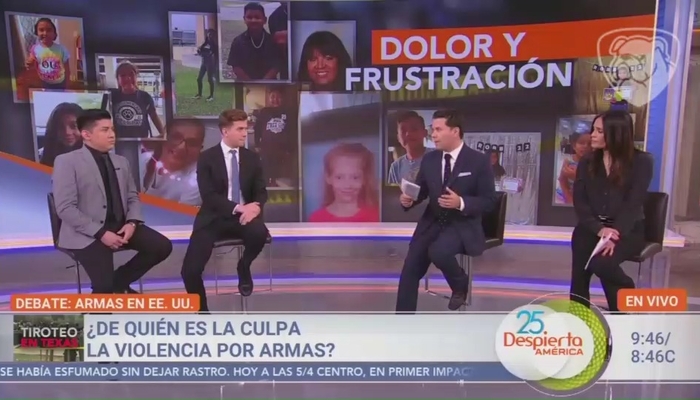 One of the downsides of a 24/7 news cycle is that it allows far more time for media types to fill airspace with bad takes, as was recently the case during Univision’s coverage of the horrific school shooting in Uvalde, Texas.

LUIS CARLOS VELEZ: Radical Muslims, for example. Radical Muslims, for example, follow the Quran to the T. The Quran to the T, right? And the Quran says, for example, that women should be completely dressed in black, that women should be covered and this has somewhat of a historical explanation due to the war, due to the way they move around as nomads. I make this introduction on order to ask you: Dude- you can’t follow the Quran to the T. We’ve seen- we’ve realized that this is extremism. Following to the T and adhering to the Second Amendment- is there any explanation for that given the facts we see today? Franklin?

FRANKLIN CAMARGO: Yes. The Second Amendment exists in order to protect citizens from the government so that in the event that a totalitarian government should attempt to use force and violate your individual rights, you are able to defend yourself. But it also allows honest citizens to defend themselves from criminals who simply do not follow the law. And there’s evidence of this. It is estimated that in 2021, last year, guns were used 1.6 million times in self-defense.

The last time we took note of Vélez, he was blasting President Joe Biden on inflation. Vélez’ odd take betrays the industrywide anti-gun biases that pervade Spanish-language media, and their inability to wrap their collective heads around anything other than gun bans.

Franklin Camargo’s response, however, obliterates that terrible segue and very clearly articulates why the Second Amendment exists in a way never before heard, to my recollection, on Spanish-language media. Camargo then goes into defensive gun use, which is often overlooked in discussions of shooting statistics. Of note: Franklin is from Venezuela, and therefore a subject matter expert on the ill effects of citizen disarmaments, the results of which are NEVER discussed on Spanish-language media.

Why does a civilian need an AR-15 or AK-47? pic.twitter.com/x3PSFHYnim

Still No Arrests by FBI in Attacks on 27 Pregnancy Centers
Demand for adjustable-rate mortgages surges, as interest rates make biggest jump in 13 years
Plane crash-lands in Miami and bursts into flames
Saira Rao says looking at the US flag makes her want to puke: ‘This country is a racist transphobic homophobic xenophobic ableist classist Islamophobic misogynistic dumpster fire’
Biden at 500 Days