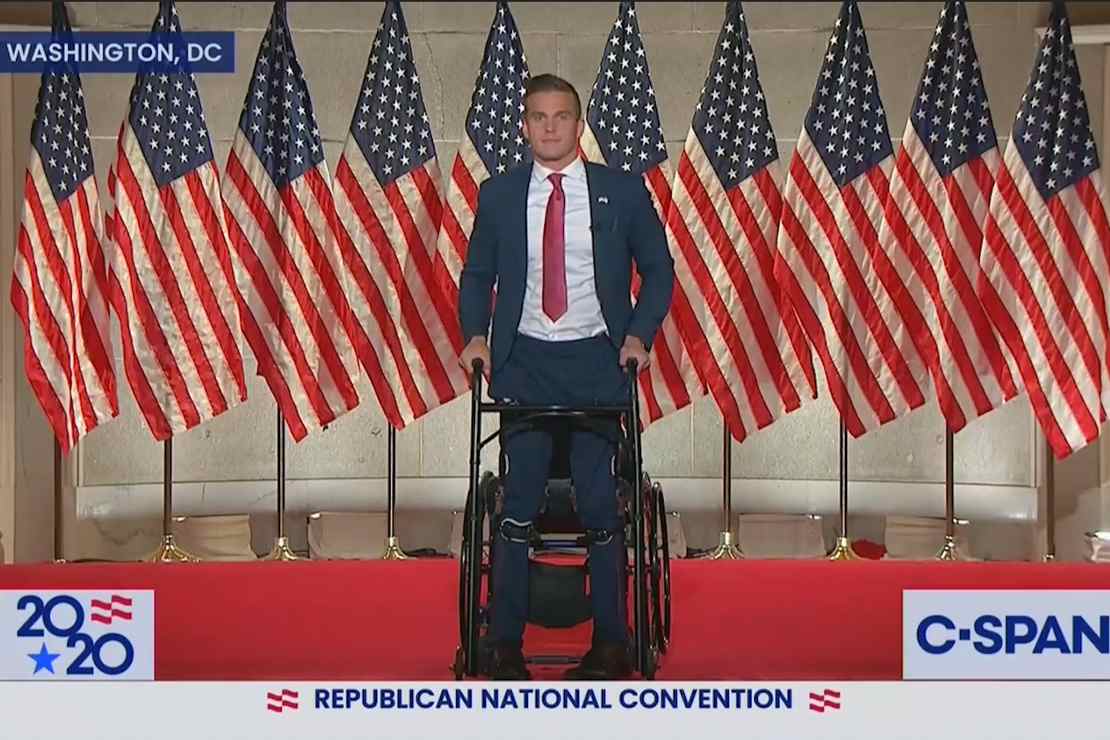 My first introduction to Rep. Madison Cawthorn (R-N.C.) was when he delivered a speech at the 2020 Republican National Convention. He was a candidate for Congress, and I wasn’t following his race. My first thought was, “Who is this kid?” The wheelchair-bound Cawthorn was just 25 years old at the time, yet delivered one of the most memorable speeches of the convention.

During the speech, Cawthorn, who’d been paralyzed from the waist down following a car accident when he was 18, called out the left for cowering to the mob.

“You can kneel before God, but stand for our flag. The American idea my ancestors fought for during the Revolutionary War is just as exciting and revolutionary today as it was 250 years ago. I say to Americans who love our country, young and old, ‘Be a radical for freedom, be a radical for liberty.” Rising from his wheelchair he added, “and be a radical for our republic for which I stand. One nation under God, with liberty and justice for all.’”

The inspirational moment was evocative of the late Sen. Bob Dole, a World War II veteran, rising from his wheelchair for the National Anthem during the ceremony when he received a Congressional Gold Medal in 2018. Dole’s moment, like Cawthorn’s, demonstrated the right’s patriotism and love of country and stood in stark contrast to the radical left, which never misses an excuse to kneel or express disdain for the country that gave them their opportunities.

That’s where any comparison between the two men ends. Cawthorn rose for the flag, but fell due to his own hubris.

Cawthorn won his election to be the Representative for North Carolina’s 11th Congressional District but has since managed to squander what was undoubtedly a promising future in politics. More often than not, if Cawthorn made headlines, it was due to something controversial.

It also came out that he had falsely claimed his paralysis had prevented him from attending the U.S. Naval Academy when he’d been rejected before the accident. He also claimed that his friend left him to die in the burning car after the accident, even though he’d actually pulled him out of it. Several other accusations were made against Cawthorn, which he denied, but more recently, graphic videos surfaced on social media, and his explanations for them were less than convincing. The scandals were enough for Trump to consider pulling his endorsement of Cawthorn, though this week, he urged voters to give him a second chance. “When Madison was first elected to Congress, he did a great job,” he said on Truth Social. “Recently, he made some foolish mistakes, which I don’t believe he’ll make again…let’s give Madison a second chance!”

The Republican voters of NC-11 clearly disagreed. They should be commended for having better judgment than their Democrat counterparts, who have shown a willingness to reelect scandal-plagued members of their party. On Tuesday night, Cawthorn conceded defeat in the Republican primary to state Sen. Chuck Edwards. It was close, but thankfully, we won’t have the young and immature Cawthorn giving us headaches anymore.

Cawthorn has some growing up to do, and he should do so on his time, not while a member of Congress.