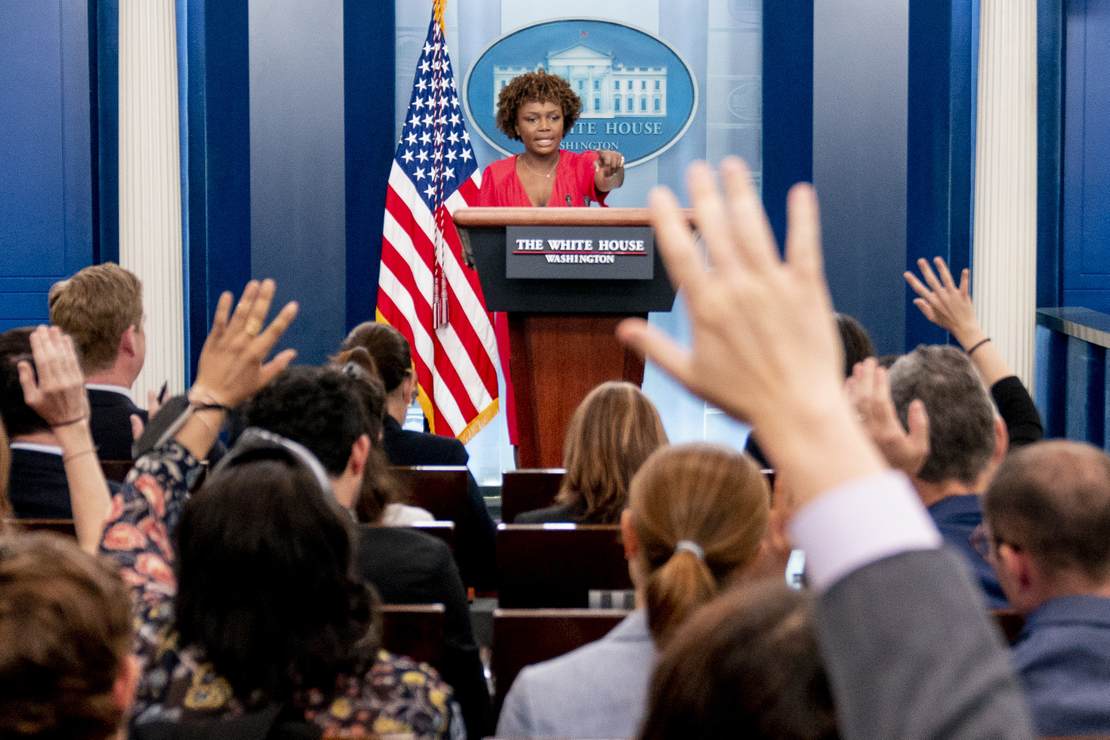 It’s no secret that I was never impressed with former White House Press Secretary Jen Psaki. She proved to be just awful at her job from the very beginning. She was terrible at lying and horribly unprepared. Yet while the mainstream media was content to give her softball questions, Fox News White House Correspondent Peter Doocy never shied away from asking the kinds of questions all networks should have been: tough ones.

For example, one of Biden’s first acts as president was implementing a mask mandate in federal buildings and on federal land—a mandate that he and his entire family violated that very night. Peter Doocy asked Psaki about this the following day, and she had no good answer, choosing instead to dodge the question. Psaki’s first week was marked by several instances of her dodging questions from the media, either because she was unprepared or didn’t want to answer. A supercut of her promising to “circle back” to the question later that went viral earned her the nickname Circle Back Girl.

Psaki never really got any better and seemingly always had one foot out the door. So her departure to MSNBC was a perfect opportunity for the Biden administration to find someone smart, competent, and maybe even a slightly better liar than Jen Psaki. Biden ultimately chose Deputy Press Secretary Karine Jean-Pierre. This was expected. As I’ve pointed out before, Jean-Pierre checks off all the necessary diversity boxes: she’s a woman, black, and lesbian. On top of those, she’s also an immigrant. But, diversity score aside, is she even remotely good at the job?

The best way to assess Jean-Pierre’s performance thus far is to see how she’s handled the tough questioning of Peter Doocy. Based on her first few days, I think we can say confidently that she is no better than Jen Psaki at handling tough questions. Let’s recap some of the greatest hits.

On Jean-Pierre’s first day, Doocy asked her to explain a recent tweet from Biden in which he claimed that raising taxes on corporations would reduce inflation.

Jean-Pierre first evaded the question, then gave a non-answer. She was asked again to explain the tweet and gave another non-answer. Doocy asked the question again, and she once again couldn’t answer the question … even though through it all, she was referencing her notes.

DOOCY TIME: Biden’s “Twitter posted the other day, ‘You want to bring down inflation? Let’s make sure the wealthiest corporations pay their fair share.’ How does raising taxes on corporations reduce inflation?”

Karine Jean-Pierre: “So, are you talking about a specific tweet?” pic.twitter.com/8z1F5puDAR

But here’s a question she should have been prepared for. The day before, it was announced that Joe Biden would visit Buffalo, N.Y. after Saturday’s mass shooting. This prompted quite a few in the media to openly ask why Biden would visit Buffalo but refused to visit Waukesha, Wisc. after a racist black supremacist drove an SUV into a crowded parade, killing six people and wounding dozens of others. Surely the White House had to expect a question about that, right? Clearly not.

“How come the President is visiting Buffalo after a senseless tragedy there, but he couldn’t visit Waukesha after 6 were killed and 61 injured in an attack on a Christmas parade there?” Doocy asked.

Jean-Pierre’s response was, to say the least, bad.

“I mean, he’s visited many communities.  Buffalo — he was — we — you know, he was — he’s able to go tomorrow to Buffalo before the trip,” she said. “That is something that was important for him to do. But he has visited many — many other communities. This is not — Buffalo is not the first community, sadly, that he has to go up to because of a violent attack. So, you know, that’s not — that’s not the first one. So he’s been to many others, sadly.”

Even by Wednesday, Jean-Pierre failed to up her game and may have accidentally said the quiet part out loud when Doocy asked her from whom the administration is worried about violence coming if Roe v. Wade is overturned.

Jean-Pierre’s response came directly from her notes, but she made a rather stunning admission when she started speaking off the cuff.

“It seems like to us that it is very one-sided on what we call out as intimidation or as violence.”

So, Jean-Pierre just admitted that they’re only calling out one side? Good to know.

Karine Jean-Pierre: “It seems like to us that it is very one-sided on what we call out as intimidation or as violence.” pic.twitter.com/kEq2PI1fWT

Of course, she may have said the quiet part out loud, but she also seemed to indicate that the White House wants to blame the right for “intimidation” even though it’s the radical left that’s assembling (illegally) outside the homes of justices.

Jean-Pierre may have been the deputy press secretary, but she’s clearly proven she’s just not ready for prime time. Like Psaki before her, Doocy will prove to be the thorn in her side, asking tough questions that she can’t or won’t answer. She’ll probably last longer in the job than CNN+ managed to stay on the air, but if I were her, I’d start shopping around at left-wing networks for a new gig where she won’t have to take questions from people who actually expect her to give an answer.