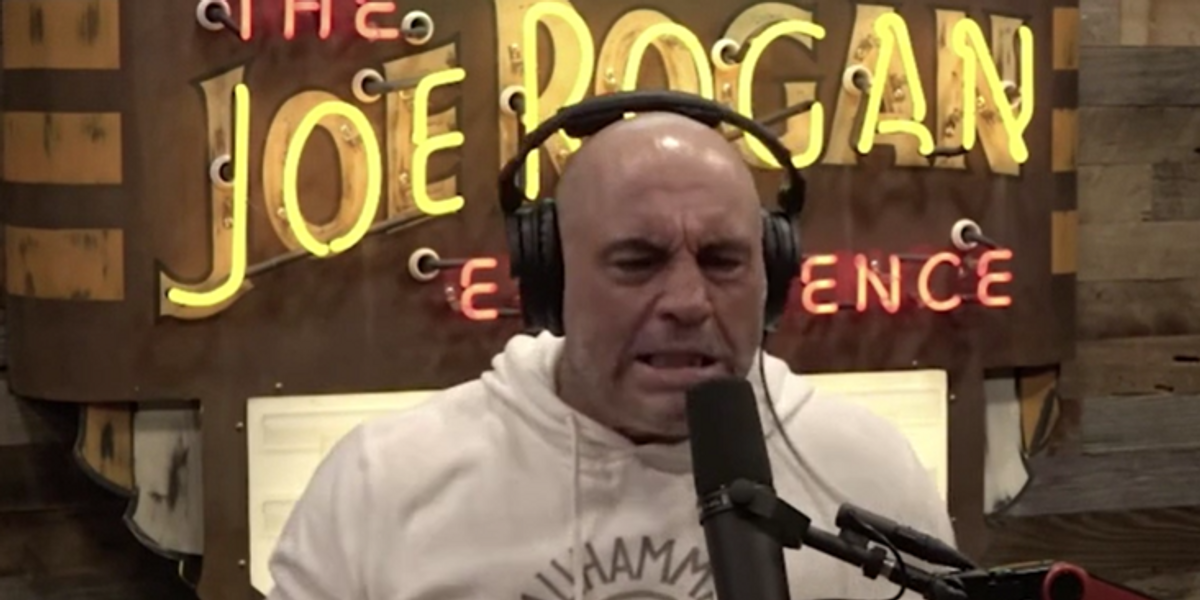 During the Wednesday episode of “The Joe Rogan Experience” podcast with guest Gad Saad, Rogan discussed educators indoctrinating children. The conversation stemmed from reference to Florida’s Parental Rights in Education legislation that prohibits school staff from talking to children about sexual orientation or gender identity in grades kindergarten through third.

Rogan declared that there is a major difference between education and indoctrination by educators. Rogan exclaimed, “And if you want to tell me that they’re the same thing, I say, ‘F*** you!’ Cause they’re not!”

He added, “Cause there’s a lot of f***ing crazy people that wind up being teachers.”

Rogan noted that a lot of people don’t like the term “groomer” and questioned their motives for being offended by the word.

The Spotify star said that he knows an “intelligent person” who said that the word “groomer” should be blocked on social media.

Instead of censoring the word, Rogan lashed out with his straightforward solution, “No! No, there should be no groomers! How about that!”

He said educators grooming children is a “real f***ing problem.”

He asked, “And how many of those people are doing it under the guise of ‘I’m an LGBTQ educator’?”

The stand-up comedian pointed out that there are teachers being arrested for sexually abusing students “every couple days.”

Saad – an author and professor of marketing at Concordia University – chimed in, “I’m keeping a tally of how much hate mail you’re going to be getting.”

Rogan snapped back, “Well, good luck. I don’t read it.”

“There’s people who are good people in all walks of life,” Rogan stated. “Trans people, gay people, straight people, bisexual, whatever the f*** you are. There’s good people in all walks of life. There’s also pieces of s**t that will use those labels in order to get closer to groups of people and indoctrinate them. Indoctrinate them for their own sexual pleasure. That’s real.”

Saad joked, “So you don’t like kindergarten teachers talking about gender identity?”

Rogan ranted, “I think, like, that’s why that whole, what they were calling the ‘Don’t Say Gay’ bill in Florida was so infuriating.”

“You should be really good to be able to — really good at what you do if you wanna talk to a f***ing 7-year-old about gender identity and sex,” Rogan said. “I’ve seen some of these people with lip rings and f***ing blue hair. They clearly are ideologically bound.”

During the same episode, Rogan also slammed people who call out of work with the excuse of taking a “mental health day.” Rogan had spoken to a friend who owns a business with multiple employees.

“She was saying that some of her employees are saying, ‘I need a mental health day today,'” Rogan explained. “She’s like, ‘You’re not sick. Get the f*** to work! You want to get paid for this mental health day? Show the f*** up!'”

“We’re not talking about your parents just died in a car accident,” he continued. “No, you just have a high level of anxiety today.”

“But I need a mental health day” – It’s impossible for me to agree with Joe this any more on this one – The JRECnnDiscussed on:nThe Joe Rogan ExperiencenEp. 1816 – Gad Saadn@GadSaad @joerogannnListen Here: https://spoti.fi/39TyKRvu00a0pic.twitter.com/bemjFsrjiR

You can listen to the entire “The Joe Rogan Experience” episode with Gad Saad below. The discussion about groomers begins at the 2:56:00 mark.