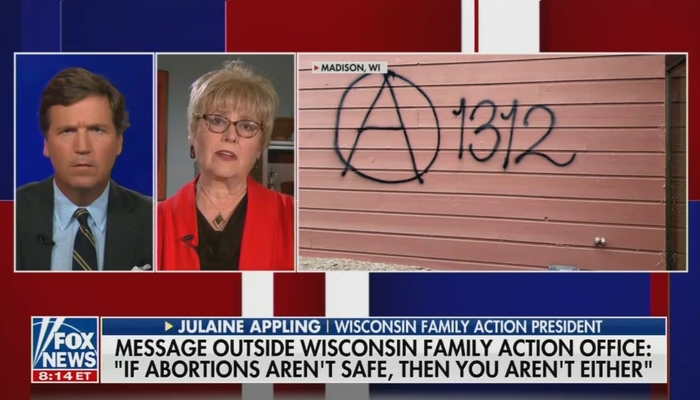 Overall, she was happy with what national attention has resulted. Some of the coverage was a little too passive, like AP suggesting “a fire broke out.”

CARLSON:  “A fire broke out.” I’m sorry even to say that to you. It’s got to be painful since it was your office that was firebombed. What do you make of the coverage of this, by the way?

JULIANE APPLING: Well, the coverage has been amazing, Tucker, and you know, to see this go national, it’s been quite an experience, to be honest. You know, we’re an advocacy group, an educational group. We do come out the issues of the day from a Christian perspective. And to be honest with you, I wasn’t sure what would happen after I found out that we had had this, you know, Molotov cocktails thrown into our office, fires ignited, and, you know, graffiti written on the outside walls of our building. So the coverage has been mixed. I’ve talked to some media outlets where, you know, basically they said that, “Hey, you guys did this. It’s an inside job.” Yeah, right. We’re going to destroy our own office. That’s certainly patently false.

Overall, though, I must tell you that other than referring to us as an anti-abortion group, which we would prefer to be recognized for being pro- life, the coverage, at least at the local level, and I think to some degree at the national level has been fairly even-handed. And because we have such evidence. I mean, I’m walking on glass in my office. We have a major cleanup job ahead of us in more order to get back to business as normal and Tucker, may I say, you are exactly right in your monologue. This is fundamentally because we hold a Christian worldview, and actually live it out when I work in the legislature with legislators, or when we talk in churches, or when we take our message to the media. That is the core issue.

It was encouraging to see that Appling was not intimidated

CARLSON:  You know, not every Christian leader fairly represents Christianity. There are a lot of lousy Christian leaders out there. But Christian people, you know, are the kindest people, the most committed to human rights of any group. I can’t think of another more committed. Why do you think they hate you so much?

APPLING: Well, you said it well, we stand in their way. I have been at this for 25 years. And I’ve said it repeatedly, when there is an impediment in the way of the liberal agenda, they have to find a way to sideline you, to silence you. I’ve even been told their ultimate goal is to destroy us. I’d say they tried that on Sunday morning, you know, under the cloak of darkness when they attacked our office. That was the goal. They want us to go away. They want us to be cowed into silence, and I’m telling you right now, they picked the wrong group, if that’s what they want. Because this has made us stronger. This has made us bolder. We’re not going to go away. We’re not going to be quiet. We are speaking truth. We’re helping people. We’re encouraging people to stand up and show up and speak up on these issues, and they’ve got to silence us in order to keep us from getting in the way of their agenda and their agenda is truly to make Christianity [go away] — exactly, exactly.

This segment was brought to you in part by Golden Corral.