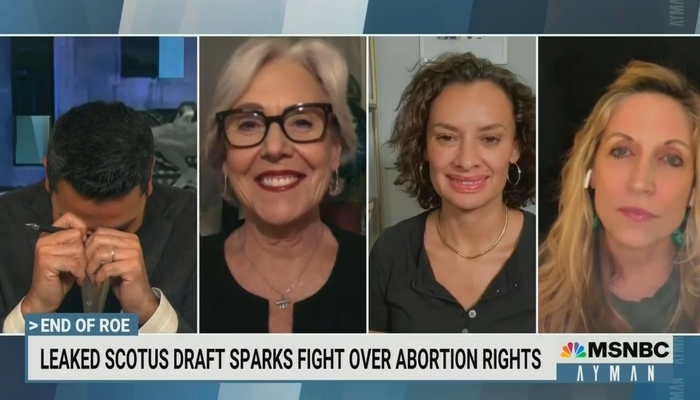 On Sunday night, as Mother’s Day wound to a close, MSNBC’s Ayman show put on a panel including liberal comedian Laurie Kilmartin. Host Ayman Mohyeldin was highly amused when Kilmartin suggested she would “make sweet love” to the hero who leaked the Alito draft opinion on abortion to Politico, and if they were a Republican and she got pregnant, she would “joyfully abort our fetus.”

So it’s sexy to help the liberal media undermine the Supreme Court.

MOHYELDIN: This is something we have talked about a lot on the show. I have certainly been talking about it, which is the combination of the undemocratically elected President Trump, appointing three Democrat — excuse me, three justices, where the Republican majority that confirmed them represented far less of the population then the majority. And then on top of that, you have abortion, that is actually something that is 70% in this country that people want. Do you agree that this is going against the undemocratic will [sic], but this is the only way Republicans can achieve this?

KILMARTIN: Yeah, I guess so. I mean, here’s the thing. Here’s my feeling about the leaker. I would like to find out who the leaker is, so I could make sweet love to that person, because that person is a hero to me. Okay? If the leaker — a lot of people are saying it could be a conservative — if the leaker is a Republican, and if I get pregnant during our lovemaking, I will joyfully abort our fetus and let them know.

She then admitted “I don’t know that answered your question. I probably didn’t.” Mohyeldin smiled and said “It was a little off topic!” and then Joan Walsh started talking up Ginni Thomas as the leaker suspect. They bring on comedians to offer comedy, not analysis.

At the end of the hour, after a second go-round with his panel, Mohyeldin referred back to the “joyfully abort” gag. “I appreciate your insights and your comedy routines and Laurie, in your case, some of your revelations there.” Kilmartin laughed heartily.

This abortion comedy was brought to you by Choice Hotels. (Pro-Choice Hotels?) Feel free to let them know what they supported.

Fox CEO Lachlan Murdoch to face questioning as part of Dominion Voting’s $1.6 billion lawsuit
Woman traveled 3,000 miles to meet online boyfriend, then is gruesomely murdered, decapitated, and has her organs harvested
Musk Says De-platforming Trump Was A ‘Grave Mistake’
Alyssa Milano virtue-signals about scrapping her Tesla because of ‘white supremacy,’ but flood of comments point out how her new electric car is problematic
You Can Define ‘Far Left’ Kook as Someone Who Makes Brian Stelter Sound Reasonable