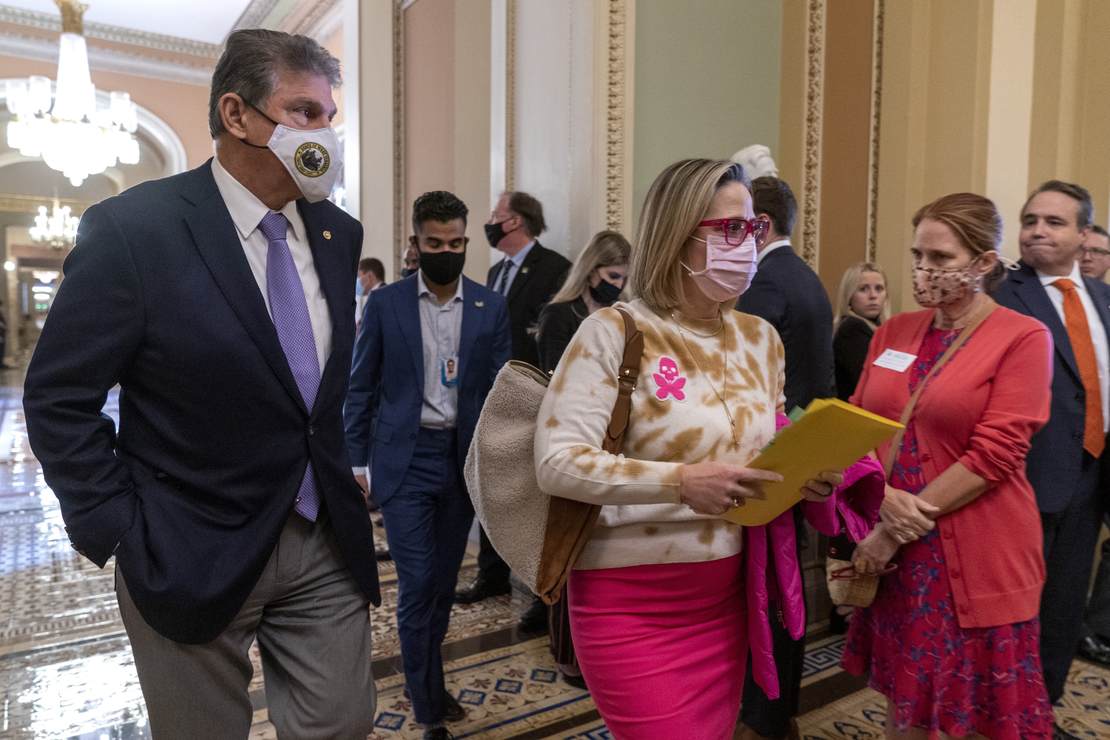 Democrat Sens. Joe Manchin and Kyrsten Sinema are under fire once again for their stance on nuking the filibuster in order to codify the decision in Roe v. Wade.

While both of them believe abortion should be legal on the federal level, there is one thing they understand that their fellow Democrats don’t: the slippery slope.

Senate Majority Leader Chuck Schumer is putting legislation up for a vote on Wednesday that would act as a safeguard against a potential overturning of Roe v. Wade but is unlikely to pass because it would need 60 votes.

If the filibuster was scrapped, it would only need a simple majority, but that does not fly with the two senators on a matter of principle.

“Protections in the Senate safeguarding against the erosion of women’s access to health care have been used half-a-dozen times in the past ten years, and are more important now than ever,” Sinema said, according to The Hill.

“Throughout my time in Congress, I’ve always supported women’s access to health care, I’m a cosponsor of the Women’s Health Protection Act, and I’ll continue working with anyone to protect women’s ability to make decisions about their futures,” she said.

Manchin also made his opposition to getting rid of the filibuster clear. “The filibuster is a protection of democracy,” he said.

Manchin on paper seems to be somewhat less supportive of abortion access in comparison to Sinema, as he voted against legislation that was similar to the current bill in the recent past, Axios reported. Still, their actions as of this moment are essentially the same.

By sticking to their guns, like they did when it came to legislation on election laws, they are in essence protecting their own party from future political losses. If the filibuster is gone, it opens the door for Republicans to take advantage once they retake the majority.

Regardless of whether or not one agrees with their intentions, their thinking certainly isn’t short-sighted. Schumer is going to do nothing but embarrass himself and his party on Wednesday when their effort fails. Instead of doing much needed introspection, Democratic politicians are going to use their failure to codify Roe as an opportunity to vilify Republicans and moderate Democrats for non-compliance.

It’s no secret that Sinema and Manchin are unpopular among members of their own party, but they represent states that are politically complicated. While the claim that getting rid of the procedure would endanger women’s rights is up for debate, it’s a politically intelligent defense.

They are not publicly complacent about the fact that Democrats will not be in control forever and that the rage of leftists will only be emboldened when Republicans are in charge, which is why their self-awareness is refreshing.

Related: Media Complains That Sinema is Not as Nice as John McCain

As they are both arguably centrists, they also know that not having boundaries in the Senate could get extreme legislation onto President Joe Biden’s desk. In other words, the slippery slope for both Democrats politically and America’s future.

WHO urges swapping of the term ‘monkeypox’ for ‘mpox’ due to ‘racist and stigmatizing language’
NewsBusters Podcast: Elon Musk vs. the ‘Defamation’ Censors
CNN analyst declares that freedom of speech is ‘nonsense,’ claims Elon Musk’s new Twitter empowers Vladimir Putin and is ‘destructive to American national security’
A husband for Thanksgiving: An answer to persistent prayer
Sunday Spotlight: A Boy’s Trip to DC Becomes an Annual Act of Patriotism