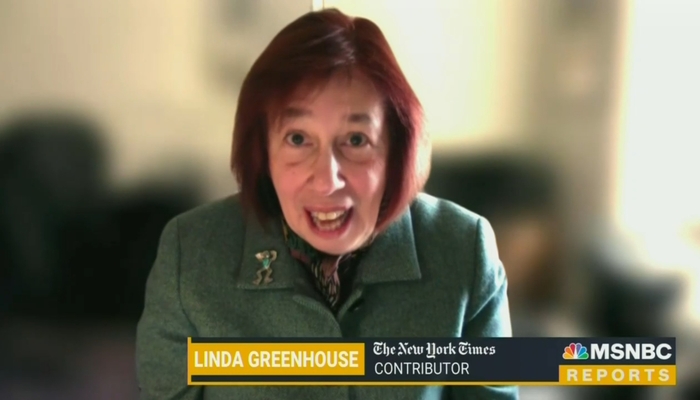 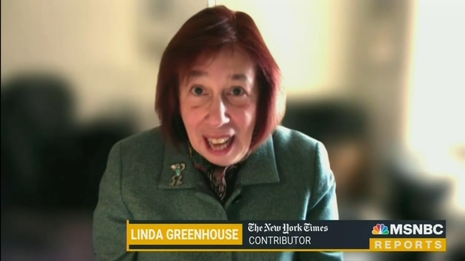 Linda Greenhouse reported on the Supreme Court for the New York Times for 30 years. Since then, she’s appeared in the paper on a regular basis giving her fiercely pro-choice opinions. So it’s no surprise she had a say about the shocking leak of a draft opinion that appears to overturn the Supreme Court’s Roe vs. Wade decision legalizing abortion nationwide.

Sunday’s edition featured Greenhouse’s “The Draft Opinion’s Missing Women.” Yes, the Times headline is suggesting the abortion ruling is leaving out “women.” This from the paper that has spent the last year or so often leaving out the word “women” in pregnancy-related stories, in order to appease radical transgenders. But with the leak of Justice Samuel Alito’s opinion, bizarre, anti-biological terminology like “birthing persons” has abruptly vanished from the paper’s news coverage of Roe v. Wade. Once again, only women can get pregnant.

Yes, the leak of the draft opinion that would overturn Roe v. Wade was a shock. And it was shocking to read Justice Samuel Alito’s airy dismissal of a decision the Supreme Court has reaffirmed numerous times in the past 49 years as “egregiously wrong from the start.” That was on Page 6 of the draft opinion that Politico published last Monday, and Justice Alito spent the next 61 pages explaining why, in his view and perhaps ultimately in the view of four other justices, the court needs to overturn Roe now.

But the real shock to me was not what those 67 pages contain — mostly warmed-over stock phrases from the anti-abortion playbook that read like a law clerk’s cut-and-paste job — but rather who is missing: women.

The Times casually mentioned near the end of a Friday story about Democrats in Congress moving to codify Roe into law that the Democrats had scrapped from the bill the part about “every person becoming pregnant.”

Greenhouse certainly didn’t fool around talking about “breastfeeding people” or “pregnant people,” but went all in in support of abortion – in the name of “women’s rights.”

The Alito draft whitewashes decades of progress on women’s rights. It fails, for example, even to cite Justice Ginsburg’s landmark 1996 majority opinion in United States v. Virginia that rejected the exclusion of women from the state-supported Virginia Military Institute.

Perhaps this is ideological muscle memory at work. Liberal reporters are used to portraying abortion restrictions as old white males imposing legislation against women, so that supposedly obsolete binary has re-emerged automatically. While the Times coverage has been reliably biased, at least in this case, the return of “women” means a slight shift back toward biological reality.

Greenhouse concluded (after a nod to the “mortifying breach” of the leak itself) with a plea to defend democracy from the vagaries of the judicial branch.

….if a half-century of progress toward a more equal society, painstakingly achieved across many fronts by many actors, can be so easily jettisoned with the wave of a few judicial hands, the problem to worry about isn’t the court’s. It’s democracy’s. It’s ours.

But wouldn’t removing abortion from the hands of nine justices in robes, and handing the issue back to the people (i.e. the states) to decide, be the truly “democratic” action here?