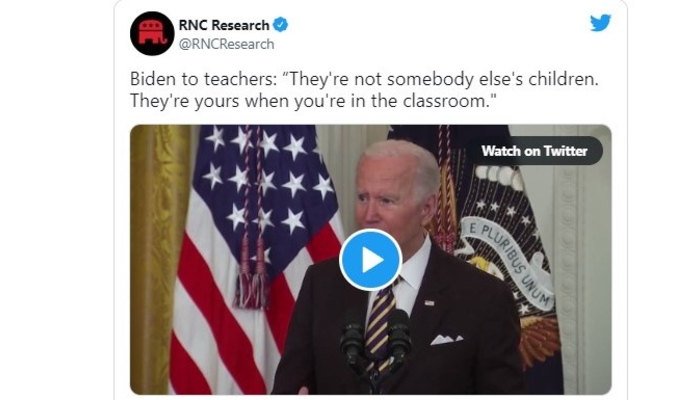 How exquisitely sensitive can PolitiFact be? On Thursday, “fact checker” Samantha Putterman slammed the Republican National Committee as “False” for leaving out ONE word of a Biden quote about the children belonging to teachers as “missing context.” The subhead of the piece was “RNC tweets distortion of what Biden said to teachers about kids in their classrooms.“

It was a White House event for “Teachers of the Year.”

Biden to teachers: “They’re not somebody else’s children. They’re yours when you’re in the classroom.” pic.twitter.com/iiBdxNkqOC

Putterman’s brief summary was this:

— The claim makes it sound like Biden was saying that kids belong to teachers and that teachers can ignore parents’ wishes. But that misrepresents Biden’s comments by omitting words and context.

–The full quote includes him telling teachers students are “like” their children. His surrounding comments show that Biden was talking about the successful education of American children.

“You’ve heard me say it many times about our children, but it’s true: They’re all our children. And the reason you’re the Teachers of the Year is because you recognize that. They’re not somebody else’s children; they’re like yours when they’re in the classroom. You represent a profession that helps them gain the confidence — a confidence they believe they can do anything.” [Emphasis by PolitiFact.]

This is a distinction without a difference. There was no “like” when Biden says “They’re all our children.” That’s the Hillary Clinton “It Takes a Village” echo. But the PolitiFlacks don’t like Republican context, which they imagine is about “ignoring parents’ wishes.” The missing word makes it a Lie!

They’re also ridiculous when they evaluate what Biden said. After we pointed out they bizarrely tried to claim Biden didn’t shake hands with thin air — “he was gesturing!” — we added they ignored his claim in the speech that he was a “full professor for four years” at the University of Pennsylvania. Later, they evaluated that…as “Half True.”

Louis Jacobson’s summary literally says it’s not true. Yes, he was a professor at Penn….

— However, the duration of his position was closer to two years than it was to four, since he was on unpaid leave while running for president.

— Biden’s duties did not include the same degree of teaching, research and administrative responsibilities that some may associate with the term “full professor.”

Jacobson even quoted the Philadelphia Inquirer that Biden’s post “involved no regular classes and around a dozen public appearances on campus, mostly in big, ticketed events.” But it’s somehow Half True he was a full professor??

PS: While the RNC and the Democratic National Committee are nearly equal in the number of fact checks (40 to 38), the DNC has been “fact checked” only once in the last four years. The RNC has been flagged four times this year — two “False” and two “Mostly False” — all in defense of Biden.