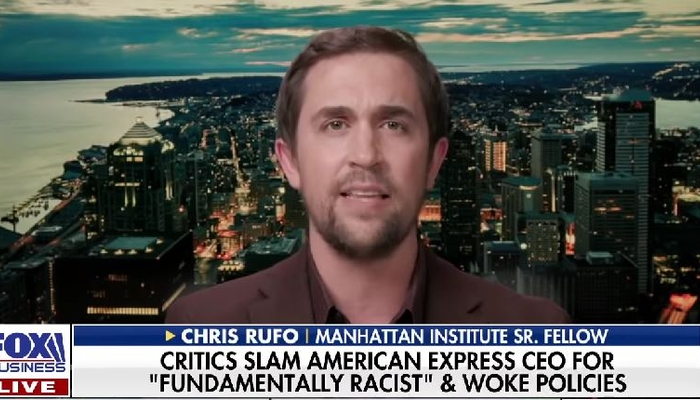 The New York Times has a new public enemy: Christopher Rufo, who has publicized myriad accounts of critical race theory indoctrination in schools and corporations via leaked documents and tapes. A Times’ headline writer let readers know he was bad news: “He Fuels Cultural Fires For the Right in Florida.” As in Florida, home of Gov. DeathSantis!

Reporter Trip Gabriel’s profile in Sunday’s edition wasn’t quite as distorted as the headline but was definitely unsympathetic in its attempt to coil the albatross of Fox News and Tucker Carlson around Rufo’s neck:

Christopher Rufo appears on Fox News so often that he converted a room in his Pacific Northwest house to a television studio, complete with professional lighting, an uplink to Fox in New York and an “On Air” light in the hall so his wife and two children don’t barge in during broadcasts.

“I’ll do ‘Tucker’ and then pop out and have dinner,” Mr. Rufo said recently at his home in Gig Harbor, Wash., thousands of miles from the nation’s media and political capitals.

Mr. Rufo is the conservative activist who probably more than any other person made critical race theory a rallying cry on the right — and who has become, to some on the left, an agitator of intolerance. A senior fellow at the Manhattan Institute, a right-leaning think tank, he has emerged at the front of another explosive cultural clash, one that he sees as even more politically potent and that the left views as just as dangerous: the battle over L.G.B.T.Q. restrictions in schools.

Gabriel moved on to Florida Republican Governor Ron DeSantis’s fight against Disney, in which he eliminated the company’s self-governing privilege in retaliation against Disney’s condemnation of the state’s Parental Rights in Education law, banning classroom discussion of gender identity before fourth grade.

That angle partially but not wholly explains the presence of “Florida” in the headline, a state which stands in for a lot of things liberals loathe these days: “The signing was the culmination of Mr. Rufo’s long campaign to short-circuit corporate and school efforts at diversity and inclusion training. He has acknowledged twisting hot-button racial issues to achieve his aims.”

Evidently, social conservative activists don’t have goals, they have “fixations,” with the “Rufo’s latest” being DeSantis “enacting a…measure abolishing Disney’s special tax status in the state.”

To criticize Rufo, Gabriel even quasi-defended the mega-corporation Walt Disney against CNN journalism about sex abuse cases among employees:

After Mr. Rufo released the Disney employee videos, he shared mug shots on Twitter of Disney workers who had been charged in child sexual abuse cases over the years, based in part on CNN reporting from 2014.

Nor did he include Disney’s response to CNN that the arrests were “one one-hundredth of 1 percent of the 300,000 people we have employed during this time period.”

His advocacy has been financially rewarding. Besides his Manhattan Institute position, he has a newsletter with 2,500 paid subscribers, and he runs a nonprofit entity to support his work, which he said had received over $500,000 in donations since late last year.

Gabriel’s take looked particularly biased in contrast to the adjacent story on the Times home page, showing how left-wing social activists are greeted with flowers: “For Alabama’s Only Gay Lawmaker, a Political Defeat Was Deeply Personal.”