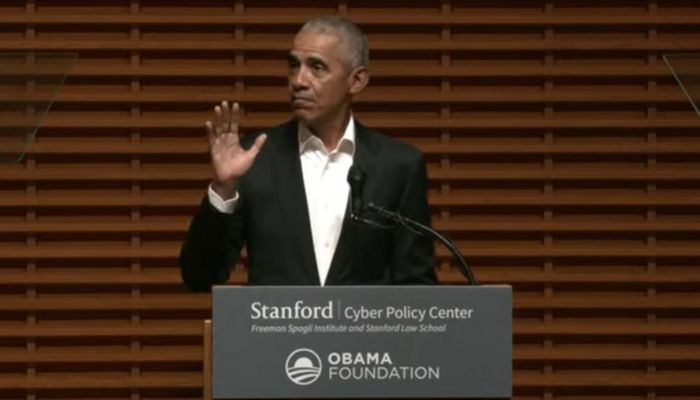 PolitiFact’s 2013 “Lie of the Year” winner Barack Obama, former president of the United States, decried that “People are dying because of misinformation,” during an April 21 speech at Stanford University. 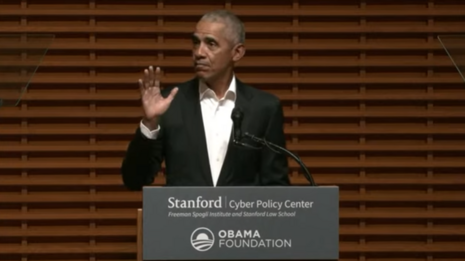 Obama delivered a keynote address on “Challenges to Democracy in the Digital Information Realm” at Stanford University, co-hosted by The Obama Foundation and Stanford’s Cyber Policy Center. “People are dying because of misinformation,” he claimed. Yet Obama promised while president that “[i]f you like your health care plan, you can keep it” under the “landmark” Affordable Care Act, or “Obamacare.” But even leftist PolitiFact rated the claim “Pants on Fire” false and called Obama’s statement its 2013 “Lie of the Year.”

Obama asserted that the very presence of alleged “misinformation” online is problematic. “People like Putin–and Steve Bannon, for that matter–understand it’s not necessary for people to believe this information in order to weaken democratic institutions,” Obama said. “You just have to flood a country’s public square with enough raw sewage, you just have to raise enough questions, spread enough dirt, plant enough conspiracy theorizing, that citizens no longer know what to believe.” He added, “Once they lose trust in their leaders, the mainstream media, in political institutions, in each other, in the possibility of truth, the game’s won.”

Ironically, after painting such a dire picture of so-called “misinformation” and the need to prevent it, Obama then insisted that democracies cannot become like China, “simply telling people what they can and cannot say or publish.” He stated, “Freedom of speech is at the heart of every democratic society.”

He also cited a study that showed the opinions of Fox News listeners changed somewhat after a certain amount of time watching CNN, indicating that people’s opinions can be changed based on what information they consume.

In the Stanford speech, Obama reiterated his previous claim that he was “close to a First Amendment absolutist,” which he also said while being interviewed at a “disinformation” conference by The Atlantic editor-in-chief Jeffrey Goldberg. Obama suggested “modifications” to online anonymity during his interview with Goldberg. In his Stanford speech, Obama again critiqued the “veil of anonymity” that users can have online.

The New York Times called Obama an “apostle of the dangers of disinformation” and claimed he “has embarked on a campaign to warn that the scourge of online falsehoods has eroded the foundations of democracy.” The Times admitted that Obama had many ties to various Big Tech executives during his presidential campaigns and tenure, including then-Google CEO Eric Schmidt, Meta COO Sheryl Sandberg and Facebook (Meta) co-founders Chris Hughes and Mark Zuckerberg. The Times framed Obama’s new role as a result of looking back and seeing that Big Tech could have been better handled.

Conservatives are under attack. Contact your representatives and demand that Big Tech be held to account to mirror the First Amendment. If you have been censored, contact us at the CensorTrack contact form, and help us hold Big Tech accountable.

Republicans Expand Lead On Generic Congressional Ballot To Eight Points
‘It just stuns me’: Biden leads reaction to abortion ruling as predecessor Trump hails decision
The Contempt of the World
CDC Uses Elmo to Convince Children to Get Vaccinated For Covid (VIDEO)
Faith and Freedom Go Together