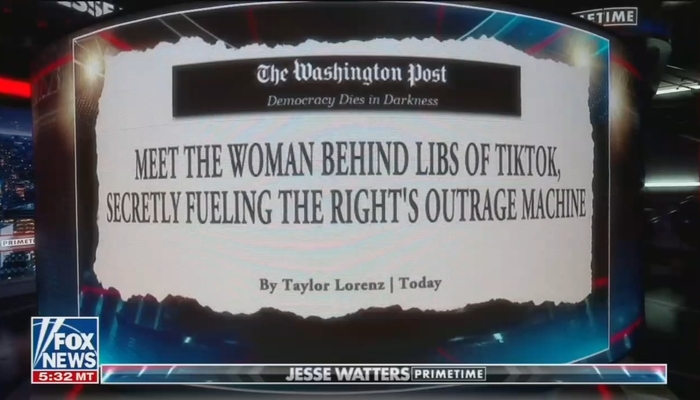 In a statement penned Tuesday, Washington Post senior managing editor Cameron Barr stepped up to defend hypocritical malefactor Taylor Lorenz after she doxed the owner of the Libs of TikTok Twitter account, including her identity and address, all because she exposed the lunatics, groomers, and general extremists of the left. And rightfully, there was a great public outcry against the paper.

But in the rest of the statement, Barr spewed lies to cover for Lorenz’s disgusting style of muckraking. He falsely claimed the identity of the account holder “had become public knowledge on social media” before their report.  “We did not publish or link to any detail about her personal life,” he added. This too was a massive LIE.

In addition to writing about how the user once lived in New York City and moved to Los Angeles, Lorenz noted the account holder was a real estate agent and a member of the Orthodox Jewish community. And she did, in fact, link to personal information before the paper was called out and silently deleted the link without an editor’s note or admission of guilt.

NewsBusters has confirmed (though we won’t share methods) that the link led to information tied to the user’s real estate license. The information included her full name, address, county, her employer, and her license number.

Wished I could have placed a bet on “Taylor Lorenz’s boss will release a statement about her by the end of the day.”

If Lorenz’s conduct is within the WaPo’s professional standards, we need to block the entire staff.

They’re lying about not linking details of her personal life. https://t.co/CA8WXAMTmz pic.twitter.com/DHwVckxLBj

Lorenz even bragged about harassing her target’s family at their homes. “A woman at the address listed to Raichik’s name in Los Angeles declined to identify herself. On Monday night, a tweet from Glenn Greenwald confirmed the house that was visited belonged to [Chaya] Raichik’s family,” she wrote.

She even threatened someone with a similar name as her victim. “You’ve been mentioned as the administrator of the ‘Libs of TikTok’ account (…) you’re being implicated as starting a hate campaign against LGBTQ people…” she wrote to them in a direct message on Twitter demanding comment.

As the day progressed, Lorenz’s “reporting” became a giant example of reap what you sow.

In a now-deleted series of tweets (screenshots live forever, check above), Lorenz whined about people on the internet doing what she did and exposing her family’s information and that of her friends. “After my whole family was doxed again this morning trolls have now moved on to doxxing and stalking any random friend I’ve tagged on [Instagram],” she moaned (all grammatical mistakes are hers). 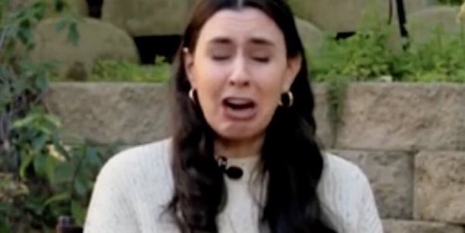 Adding: “They’re posting their details of my friends and sending threatening texts w/ messages ‘I noticed you are close to Taylor Lorenz…’”

In a follow-up tweet, Lorenz decried the doxxings as “just transparent attempts to silence the press (…) They do this stuff for a reason and it’s intimidation.”

Really? But we were reliably told by your employer this kind of “reporting” is up to “professional standards.” It seems these are the rules of engagement they want in the culture war now.