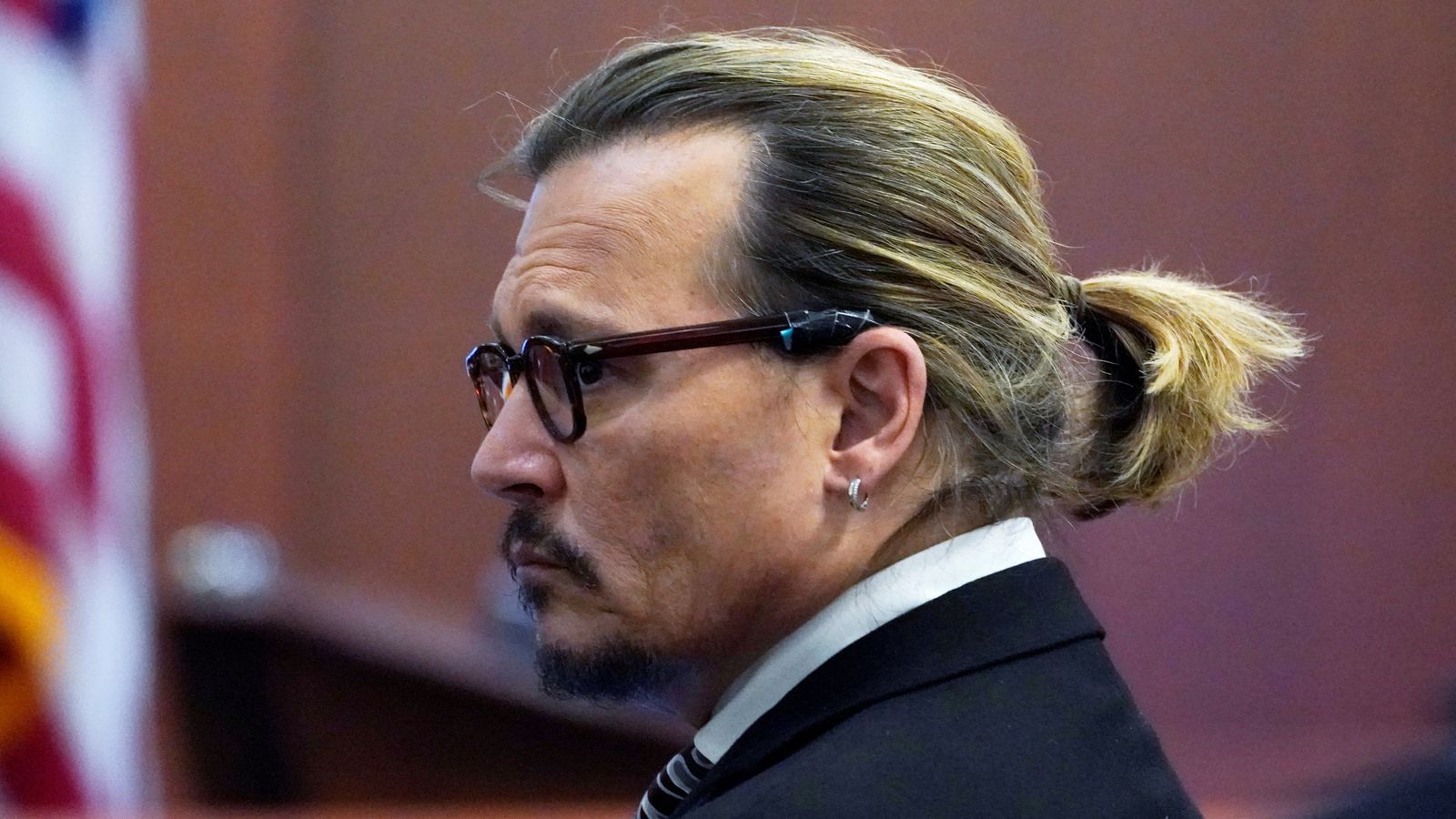 A series of pictures showing Johnny Depp with apparent lacerations, bruising and scratches to his face alleged to have been caused by Amber Heard has been shown to the court on day four of the libel trial between the actor and his former wife.

Depp is now scheduled to give evidence on Tuesday, according to Court TV, who are airing the trial live from Fairfax County District Courthouse, Virginia.

Images shared with the court were taken on a mobile phone by Depp’s security guard Sean Bett, who told the jury he had insisted on taking the photos “as evidence in case Ms Heard tried to make allegations against Depp”.

During his testimony, Mr Bett said that while he never saw any physical violence between Depp and Heard he did see injuries on Depp on several occasions. The images shown to the court were taken in March 2015 and December 2015.

Mr Bett also referred the now infamous trip to Australia during March 2015, during which an incident occurred that severed the tip of Depp’s finger and left him needing a skin graft and an operation to insert two pins in order to mend the wound.

Reports of how the injury took place are conflicting, with Depp’s team saying it was caused when Heard threw a vodka bottle at him, while Heard‘s team say the actor injured his own hand when smashing a phone against the wall.

Here are some of the key points from the fourth day of testimony:

Evidence about the alleged Australian incident – which was described as “a three-day hostage situation” by Heard during the London libel trial of 2020 – was given by both Depp’s private physician, Doctor Kipper, and his former private nurse, Debbie Lloyd

Heard alleges that during this time Depp both physically and sexually abused her – claims Depp strongly denies.

Depp’s private physician, Doctor Kipper, told the court he had been in Australia at the time of the alleged incident, witnessing “blood” and “glass” in the house and taking Depp to the hospital for emergency treatment after initially treating the wound.

Later in the day’s session, Depp’s former private nurse Debbie Lloyd also described the scene, saying she too had helped search for the actor’s fingertip, and describing the house as “a mess” with “writing on the walls and a smashed television set”.

While both medical professionals said they had never witnessed any physical violence between Depp and Heard, both talked about arguments between the pair.

Ms Lloyd described the relationship as “toxic” and told the court she believed Heard to be “the instigator” in the couple’s disputes. She said Heard was undergoing her own therapy during their relationship due to “anxiety” and had her own private nurse – Erin Boerum.

During Ms Lloyd’s testimony, when some of Depp’s texts containing colourful language are read out, there was laughter in court and Depp smiled. He also occasionally sketched in notebook while evidence was being given.

When Ms Lloyd is read a text from Depp which appears to be him saying goodbye to her following her care, in which he writes: “I love you so much little Debbie, and of course Kipper too!!!!”, she looked touched, telling the court: “I think I’m going to cry.”

Later in the day during evidence from Sean Bett who has worked for Depp for 14 years, the jury was told that while Depp’s relationship with Heard began well, it later became fraught with arguments.

‘Kill each other or go to jail’

Mr Bett says he told Heard on one occasion: “Amber, this can’t continue, you guys are either going to kill each other or be in jail.”

He said “the constant arguing, and bickering was slowly progressing… And it was just going to turn out bad eventually”.

Mr Bett went on to describe an argument that took place after Heard’s 30th birthday party at one of Depp’s penthouse apartments in LA in April 2016, and the couple’s final run-in the following month again at the apartment block.

He said that when he returned with Depp, and the actor’s late security guard Jerry Judge, another argument ensued, during which he and Mr Judge intervened, but witnessed Heard shouting about Depp hitting her, while standing at some distance from the star. They later left the building, and the couple publicly announced their separation soon after.

There was a slight delay to proceedings mid-way through the day when it was announced that a male member of the jury would be stood down due to “health issues”. No further details were given.

At the end of the day’s evidence Judge Penney Azcarate joked to the jury “take your vitamins, we need you in the morning”.

With Depp now due to enter the witness box on Tuesday, day five in court will also see security guard Sean Bett complete his evidence and the actor’s friend and former sound technician Keenan Wyatt scheduled to give testimony.

It is expected that Depp will be cross-examined by Heard’s team on Wednesday.

The trial, which is set to run over the course of seven weeks, continues.